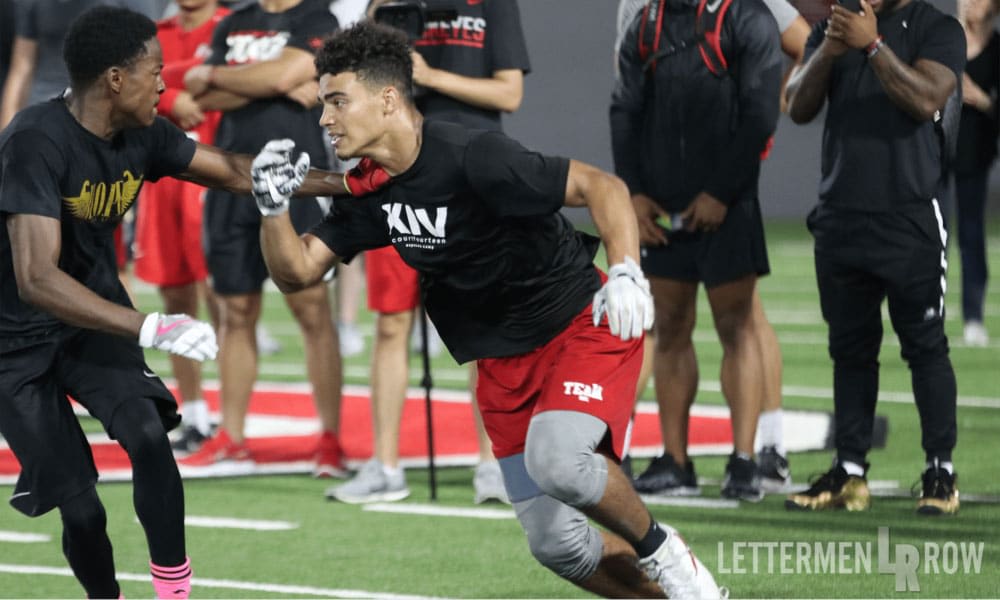 There’s no specific timeline for a decision, but Ohio State’s 2019 tight end question could soon have an answer.

As first reported by BuckeyeGrove.com’s Marc Givler, the Buckeyes will welcome Parkersburg (W.V.) tight end Brenton Strange back to Columbus for the third time in three weeks when he arrives on campus Saturday morning.

The visit is important for Strange, he says, because of who is coming along for this trip.

“This is so I can get my mom to see the place,” Strange told Lettermen Row about this weekend’s trek. “She hasn’t been with me the other times I’ve been up.”

That’s a pretty good sign for Ohio State, I think, as Strange looks toward his college decision. His recruitment has skyrocketed in recent weeks, with Ohio State and Notre Dame each offering following school visits.

Ohio State will no doubt use the time with Strange this weekend to see how he fits in with the current Buckeyes roster as well as giving him a chance to get more familiar with the Class of 2019, as a handful of those commitments will be in town all weekend long.

Wright is a talented 6-foot-3, 200-pound athlete who camped at Ohio State last June and immediately turned heads as a potential target for the Buckeyes. Since then, however, things haven’t seemed to stay “hot” between the two sides and there’s been no real traction.

Still, the Buckeye are in the mix with Bama, Purdue, Kentucky and Louisville. Wright just recently visited Bama for the first time and Stefan LeFors, the coach at The CAL said it was eye-opening.

“He went to camp at Louisville and Alabama last week and did real well, “LeFors told Lettermen Row. “He enjoyed both camps. It was his first time down in Tuscaloosa. He came away very impressed with their program.”

In an ideal world, Wright will make his college decision before the start of his senior season and that gives the Buckeyes limited time to reestablish themselves as a legitimate contender here, if they wish to.

“He will make the decision when the time is right for him and his family,” LeFors added. “I think he plans to sign during the early period in December.”

In each of the last two recruiting cycles, Ohio State has gone to Jacksonville (Fla.) powerhouse Trinity Christian and signed the best defensive back the school has to offer, inking Shaun Wade in 2017 and Tyreke Johnson in 2018. There are not any immediate plans for a third consecutive addition, but a 2020 prospect to know has popped up at the school and he’s heading to Columbus this weekend.

That is Miles Brooks, and he’s another long (6-foot-2) and talented (No. 59-ranked player in the Class of 2020) defensive back with an early eye on the Buckeyes. The relationships with Wade and Johnson have helped open the door for Ohio State.

“We’re very tight,” Brooks said of the former Crusaders. “They are like my big brothers, my mentors. They’ve each taught me a lot. Relationships are always key in life and I feel like the relationship I have with them may help me see things differently and allow for more comfort [at Ohio State] than some others schools.”

The trip to Columbus this weekend will include a visit for Friday Night Lights, but Brooks won’t be working out. Though he’s a Florida resident, he’s very familiar with the Midwest.

“I’m in Detroit, right now visiting family, my dad’s mom is here and so is my great grandmother,” he said. “I’ll will be headed there Friday and will be there till Sunday.”

There are no other schools on tap for a visit this time around, and Brooks says that Ohio State is one of the schools recruiting him the hardest.

“Even though they haven’t offered yet, Ohio State seems to be feeling me a lot,” he said. “And Georgia and Alabama are showing tons of love, too.”

Looks like another national recruiting battle ahead in Jacksonville.

A name you ought to know

From the “You’re getting old” department: Pickerington (Ohio) Central wide receiver Lorenzo Styles, a 2021 prospect, is beginning to emerge as a top talent in the Midwest.

Styles, whose father played linebacker at Ohio State from 1992-1995 and was a third-round pick of the Atlanta Falcons, recently added his biggest scholarship offer to date following a dazzling performance at Notre Dame camp last Sunday.

The younger Styles is 6-foot-1 and 170-pounds, and just getting started with recruiting, but he’s potentially a national-level recruit. Because of Pickerington Central’s clout, he’s been able to make relationships with a couple colleges already and has been hearing a little bit from Ohio State, though they can’t really communicate with him much because he’s just a rising sophomore.

“Ohio State has been sending me a lot of camp information,” Styles shared with Lettermen Row. “I won’t be attending this year. I missed the first two because I was attending a satellite camp in Maryland and last weekend I couldn’t attend because I was at Notre Dame’s camp.”

There’s no pressure from dad to follow in his footsteps, either.

“I’m fortunate enough to go to such a good high school, with multiple coaches coming in an I have been able to establish relationships,” he said. “You would assume that because of my dad there’d be pressure to go to Ohio State, but he’s open-minded. I didn’t have a favorite school growing up, I just watch the game.”

And Buckeyes fans should be watching Lorenzo Styles over the next two years. There’s still plenty of time for Ohio State to make a move, but this is a local guy that will require some real recruiting.

“People assume I want to go to Ohio State because of my father, also because we live here,” Styles said.” Ohio State was the best fit for my dad. I need to find the best fit for me. Ohio State is a great program and I hope I can develop a relationship with the coaches and get a better feel for the program.”

Can Ohio State afford to wait on a 2020 quarterback while figuring out the 2019 situation?
What is the latest with Ohio State and IMG 4-star running back Noah Cain?