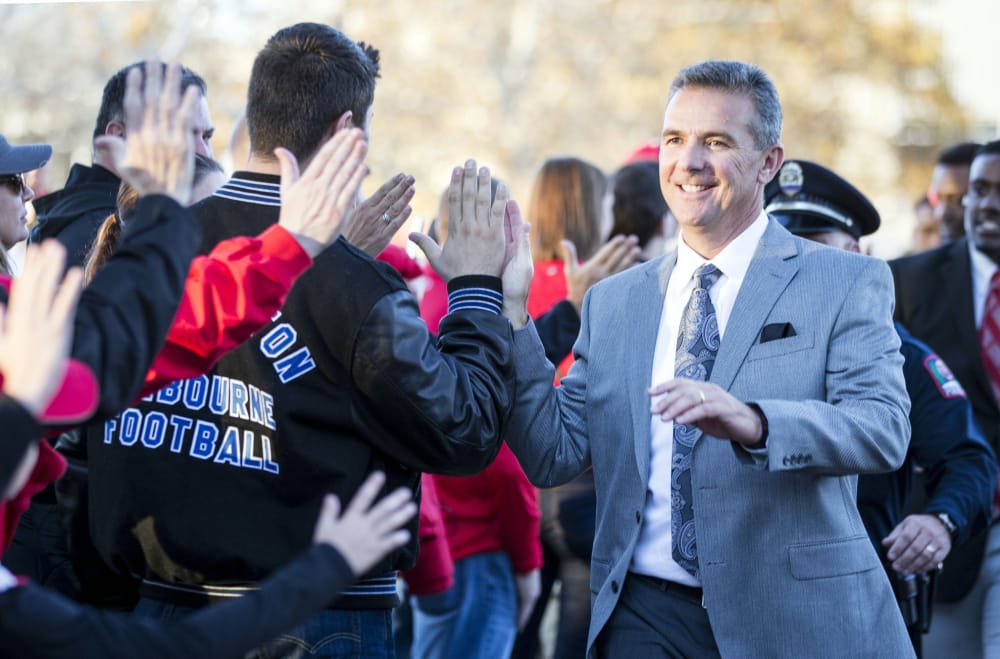 Urban Meyer has had plenty to smile about lately on the recruiting trail. (Greg Bartram/USA Today sports)

Ohio State missed on Jackson Carman in 2018 and is in a huge fight for Zach Harrison in 2019, but the Class of 2020 might be the one to give the coaching staff a bit of a break when it comes to signing Ohioans. The Buckeyes already hold a commitment from 5-star offensive tackle Paris Johnson, and Akron Archbishop Hoban athlete Deamonte Trayanum, a running back/linebacker has Ohio State at the top of his list after a recent visit.

Ohio State had a big weekend of recruiting visits, including a trio of talented players from Washington (D.C.) St. John: 5-star linebacker Mekhail Sherman, 4-star defensive tackle Tre Williams and 4-star wide receiver Rakim Jarrett. All three prospects are in the Class of 2020, which is shaping up to be an excellent one for Ohio State. They also all spoke to Lettermen Row recruiting czar Birm about their experience at Ohio State.

“It was great,” Jarrett said. “I’ve always wanted to visit and it was shocking that I was finally there as a recruit. I still had to be focused on what they have to offer me as far as an education and football.”

It’s apparently good business for football teams from smaller athletic departments to visit Ohio Stadium. Eleven Warriors obtained the game contracts for non-conference foes in the coming years, and several teams are set for quite the windfall. Here’s a look at what some upcoming Ohio State opponents will make for what will in many cases be a blowout loss.

Young CBs will likely have to wait

Ohio State signed a ridiculous amount of talent in the Class of 2018, and the Buckeyes further bolstered their defensive back depth by adding 5-star cornerback Tyreke Smith. The Tuesday question of the day what Johnson’s playing time would look like in 2018, and Lettermen Row senior writer Austin Ward noted that the Buckeyes’ talent has done a good job of keeping the youngest Bucks off the field until they’re ready.

“Denzel Ward waited his turn. Gareon Conley’s first season on the field included a grand total of two passes defended. Eli Apple took a redshirt year. Marshon Lattimore had to fight through injuries, but his emergence also needed time for the breakthrough,”Ward wrote. “And all of those guys wound up becoming first-round picks because they trusted the system Ohio State had in place, which is clearly working.”

It’s off to Europe for Ohio State basketball, which will spend the next 10 days in Spain playing exhibitions in Madrid, Valencia and Barcelona before returning. Prior to Wednesday’s departure, the Buckeyes took part in an open practice followed by a press conference with head coach Chris Holtmann.

Check out this story for video from Holtmann as well as footage from practice.