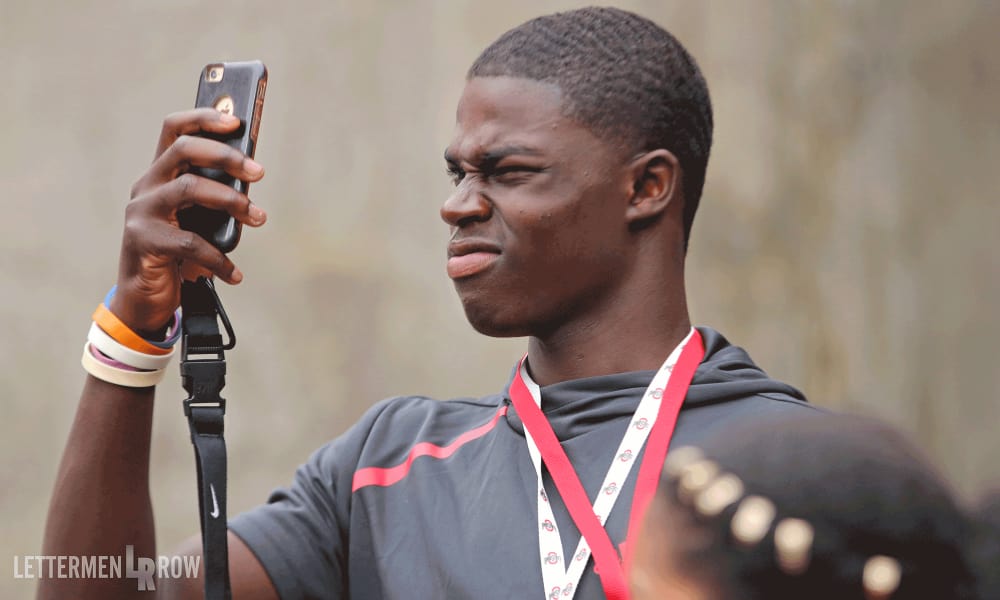 Stay in touch or be left out because Ohio State recruiting is a 24-hour, seven-day-per-week obsession. What’s the latest news as the Buckeyes build for the future? Get that and more Sunday through Thursday on Lettermen Row, including a return visit to Ohio State for big-time 2020 prospect DeaMonte Trayanum.

Though he had planned to visit Ohio State for the season-opening game against Oregon State, Akron (Ohio) Archbishop Hoban 4-star 2020 prospect DeaMonte Trayanum was unable to make that trip. This weekend as the Buckeyes host Indiana, he’s expecting to be at Ohio Stadium and doesn’t foresee any challenges to making the visit.

“I’m coming this weekend,” Ohio’s fifth-ranked 2020 prospect told Lettermen Row. “I’ve been talking to them pretty much every single day since Sept. 1. It’s been pretty cool to experience being able to talk to them daily.”

A 5-foot-11, 215-pound running back and linebacker for the Knights, Trayanum talks primarily with Ohio State linebackers coach Bill Davis and coach Urban Meyer. So far, his relationship with the Buckeyes is probably better than with any other schools.

“Ohio State talks with the most of any school,” he said. “Our relationship is really strong. It’s stronger with Urban Meyer than with a lot of coaches I talk to. They tell me to just keep doing what I’m doing.”

What he’s doing is leading undefeated Hoban from two positions. This weekend he’s hoping to be able to relax, enjoy a game in Columbus and continue to learn more about the Buckeyes.

“My goal for this visit?” he said. “Just to enjoy myself.”

An Akron native who spent some time living in South Carolina, Trayanum feels that a decision could come in his recruitment sometime soon. Ohio State and Clemson have been the two schools near the top of his list since the summer. That doesn’t mean he’ll make any kind of announcement, though.

“In my mind, maybe [it’s close],” he said. “But I won’t announce anything until after the season.”

Awhile ago, like back in 2016, there was a small moment in time where it felt like Ohio State had a fair-to-decent chance of landing Georgia 5-star wide receiver Jadon Haselwood, regarded by many in the recruiting world as the best wide receiver prospect in the Class of 2019.

Haselwood was very close to then Ohio State target Brenton Cox, who eventually committed to the Buckeyes. And the pair made trips to Columbus together, building a very strong relationship with the Ohio State staff.

The Cedar Grove High School star, coincidentally the alma mater of current Buckeyes defensive tackle Antwuan Jackson, committed to Georgia more than two years ago. Tuesday night, he officially announced he was re-opening his recruitment after months of speculation following a handful of visits to Auburn and an official visit to Oklahoma.

Thank you and no interviews at this time… pic.twitter.com/pAd8yPZjwz

This weekend Haselwood will visit Miami, a program that he has serious interest in according to a well-connected Georgia source. He also intends to take three other official visits, with Auburn certainly landing one at some point and Georgia expected to as well. The final trip? That is up in the air, but I’m told that the final visit will likely come down to Ohio State or LSU.

Haselwood has an existing relationship with the Buckeyes, so I wouldn’t at all be surprised if he was on campus in late November as Ohio State takes on Michigan. Do I expect that he’ll commit to Ohio State or believe that the program is anywhere near the top of the list for him at this point? Not at all. In fact, I still think Georgia is the most likely landing spot with Auburn and Miami fighting back and forth to try and overtake the lead.

The Buckeyes have two commitments at wide receiver in 2019 and there’s not a scenario imaginable where they’d turn away a player like Haselwood if he expressed real interest in them again. That said, I would not be overly optimistic about Ohio State’s chances at this point.

If you can remember back to the 2016 season football season and the recruitment of current Ohio State redshirt freshman Shaun Wade, you likely remember the insanity that surrounded his recruitment.

It seemed like every single week Wade was linked to a different school, with Alabama somehow being the favorite to earn his signature despite an almost two-year commitment to the Buckeyes. Fast-forward to the present and look closely at the recruitment of current Ohio State verbal Jordan Battle and you’re likely to see some similarities.

There are going to be a lot of discussions about Battle in the upcoming weeks and months, but most of the talk right now is about his visit to Oklahoma this past weekend. He took that trip with teammate and Sooners commit Jaden Davis, as well as running back Kenny McIntosh from Fort Lauderdale, Fla. And since he’s arrived back in Florida, a couple of Texas-tinged crystal ball predictions have suggested he could be in the process of a flip to the Sooners.

The Oklahoma visit was not a surprise, and visits to Florida, LSU or Alabama won’t be either. He will take two more official visits, according to his father. The commitment to Ohio State is still standing, and the commitment to enjoy his recruitment and see other schools is as well.

When it comes to recruiting, rumors fly fast and furious. Sometimes, it’s hard to know who to believe. Here, we’re going to remain calm and take Fred Battle, Jordan’s father, at his word.

“Jordan loves Ohio State,” the elder Battle told Lettermen Row. “But he wants to use his official visits and should because he worked hard for it. That’s it. There’s no story and he’s not your normal Florida-based recruit. His mom and dad are involved and he’s not be influenced by handlers or coaches who are looking to benefit from his talents.

“The only people who matter is the coaching staff at Ohio State. They know, and they believe, in his heart.”

While DeaMonte Trayanum is the more widely-known prospect, another talented 2020 player in the Akron area is also getting some regular attention from the Buckeyes.

“It was great honestly,” Kamara told Lettermen Row. “The stadium was everything I thought it would be and more. I also learned a little about the university and tradition, but what stood out for me was the players and just how they are with each other.”

Kamara didn’t spend much time with the Ohio State coaches but was able to get a little time with linebackers coach Bill Davis.

“He was telling me to watch the linebacker in the game and kickoff so I can get an idea of the physicality of the linebacker there,” he said. “Baron Browning really stood out to me, but I felt the whole linebacker group was physical.

“The whole visit was just a good thing because it was a learning experience and about building relationships with the coaches and seeing the atmosphere. I have to plan to get back there.”