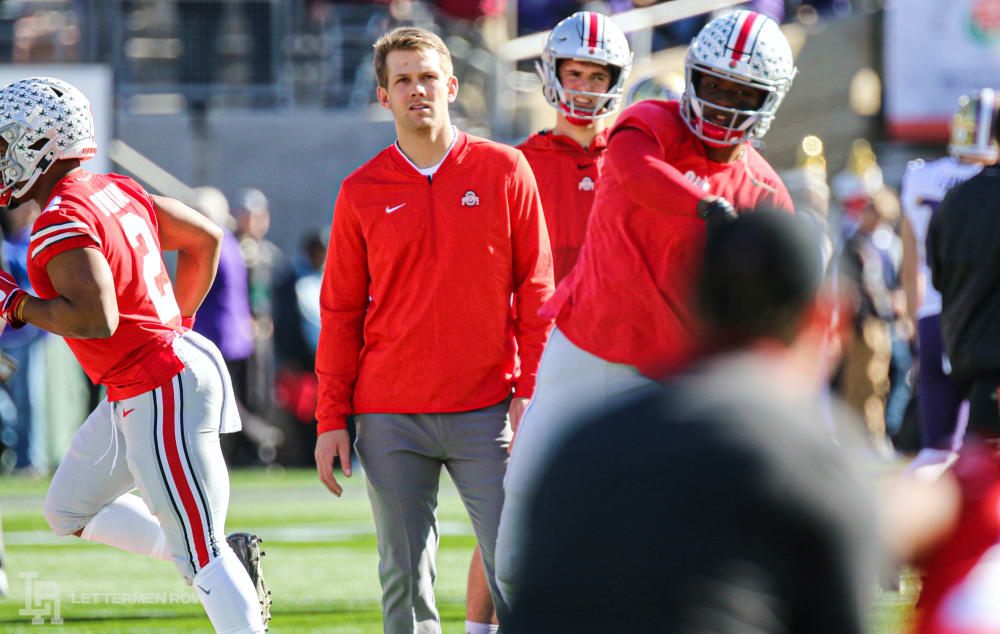 COLUMBUS — Newly-minted Ohio State quarterbacks coach Corey Dennis must’ve been excited for the first bit of traveling that his new job presented to him.

“He called me at like 7 a.m. to tell me,” Buckeyes 2021 commitment Kyle McCord joked with Lettermen Row on Thursday. “He’s coming by [Friday]. I can’t blame him for calling that early, he’s like a kid on Christmas.”

McCord is excited, too.

For a moment or two in December, he was worried he’d be losing both of the quarterback assistant coaches who had been recruiting him since he verbally committed to the Buckeyes in April. Mike Yurcich was leaving and Dennis was on his way out of town, expecting to begin his coaching career as the quarterbacks coach at Colorado State. Instead, he’s back in Columbus, a move that was applauded by the 6-foot-4, 205-pound McCord.

“When Coach Day told me that Coach Corey was staying, it was the best news possible for me,” McCord said. “I was really excited. Coach Dennis has been huge in the process for me. We started building our relationship last February on my first visit, and he was a big factor in why I committed a few months later. He has great energy and great knowledge of the game. We talk multiple times a week, and I’m extremely excited to work with him.”

On the first day of the final contact period for the 2020 recruiting cycle, Dennis went to see his 2021 commitment to continue building their relationship. Both of the Buckeyes 2020 quarterback signees, C.J. Stroud and Jack Miller, have been on campus in Columbus for ten days already, so McCord was the obvious choice for travel. It also makes sense that Dennis is excited for his first recruiting trip as a full-time coach after five years of working inside the Woody Hayes Athletic Center as an intern, graduate assistant and then as a senior quality control coach.

Youthful enthusiasm and a half-decade of teeth-grinding are two of the reasons why Ryan Day felt comfortable turning over the quarterback room in Columbus to Dennis, who worked directly under Day’s tutelage in 2017 and 2018. No one in the country could be more aware of the potential Dennis has than Day, and that knowledge has given the second-year Ohio State coach confidence in his now first-year position coach. 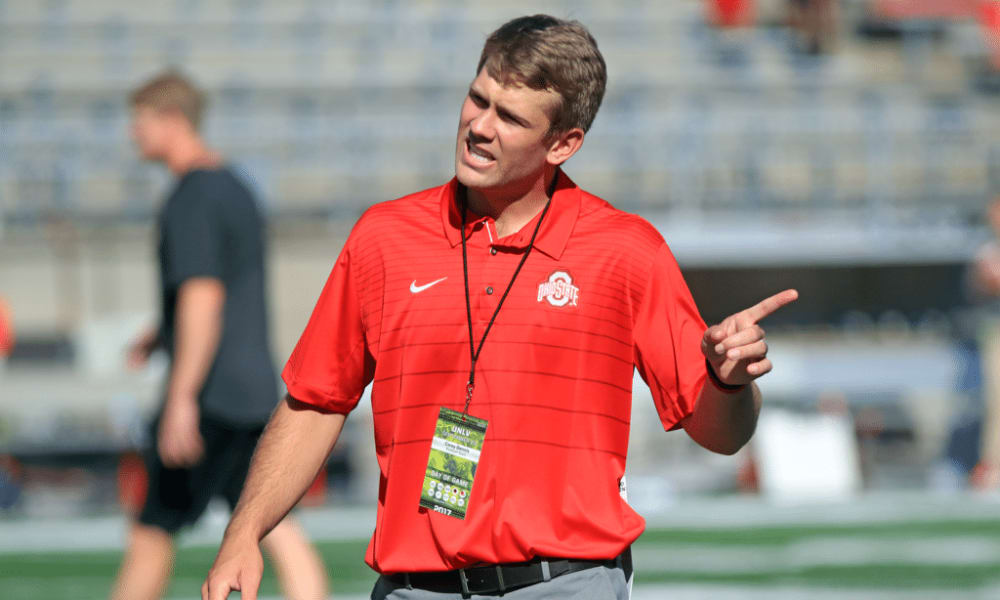 Corey Dennis began his tenure at Ohio State in 2015 as an intern. (Birm/Lettermen Row)

“Since I got here Corey’s kind of been my right-hand man,” Day said. “And we’ve spent a lot of time in that meeting room together. He knows exactly how we teach things. And he’s got a tremendous relationship with the quarterbacks here. He’s done a good job in recruiting and has had a hand in a lot of stuff.”

McCord, the country’s No. 5-ranked junior quarterback, may have committed to Day and Yurcich, now the offensive coordinator at Texas. But Dennis has been perhaps his most regular point of contact at Ohio State, though talking to recruits isn’t the hard part of being an unproven assistant coach for a 27-year-old who is recently removed from his own four-year college football career. But now the amount of stuff that Dennis has his hand in is about to multiply.

He’s always been adept in conversation and has played a big role in wide receiver and quarterback recruiting when prospects have been on campus, something he’s helped with since 2016 when he worked as a graduate assistant with the wide receivers. Dennis has been fortunate to learn coaching from men like Day and his father-in-law Urban Meyer, but how he handles his new job from here is up to him. The new full-time assistant will have to take the next steps and prove to doubters that he earned his promotion and that it wasn’t just given to him in some misguided act of nepotism, a charge already being lobbed by the cynical types out there.

Being a full-time, on-the-road assistant coach means balancing life and football in a way that can’t be replicated or practiced for in advance. Again, there is no shortage of confidence from Day that he’s the right choice.

“I think the kids really like him, I think the parents really like him — you can tell who he is,” Day said. “He’s a great husband, great father and made of the right stuff. Very bright. He played the position at certain times in his career. I think he’s really bought into how we do things here and he’s proud of that and really understands what we’re doing in terms of attacking coverages and different schemes and techniques and all those things.” 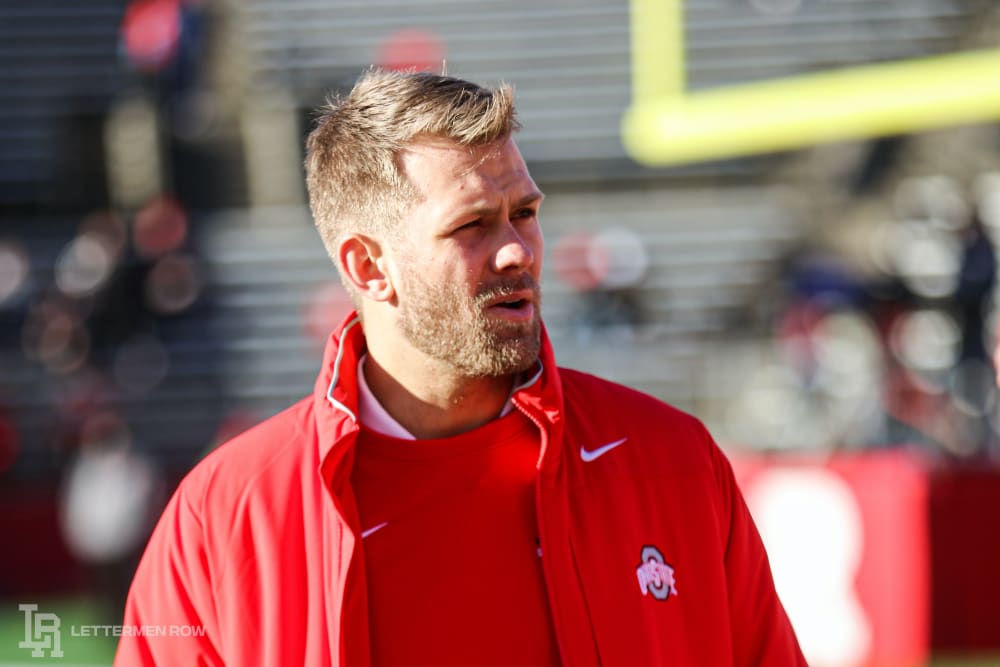 The true measure of success for Corey Dennis, and in many ways for Day’s decision to hire him, will be how he evaluates the next quarterback offered by Ohio State. Then the next after that. The expectation is that Dennis will be at Ohio State for several years, and though Day’s trust in him is clear, when it comes to evaluations and offers, it’s likely to be a tag-team effort. Day’s bread and butter is the quarterback position, and his input and advice will only sharpen the young protege’s sense of what the Buckeyes are looking for.

“We’ll work on that together, that is a piece of the puzzle,” Day said. “I certainly want to see these guys throw, too. Whether it’s going out there in the spring for Corey to go watch them or bring them into camp and see them throw … I always feel like I need to see the guy throw live before we do anything.”

Recruiting is about trust and comfort. Corey Dennis has proven himself on both of those counts already. His relative inexperience will be used against him on the recruiting trail. Unlike Day or Yurcich, the fact he hasn’t developed quarterbacks on his own yet will be a test to overcome. He will, though, be able to point to Dwayne Haskins and Justin Fields as a pretty good starting point.

Of course, recruiting is one part of the job. Talent development and knowing the game of football is another.

“I watched film with him over the summer and it was really cool,” McCord said. “He was going through plays of the 2018 season with Dwayne. I was really impressed with the way he was coaching me. Later, watching practice was another chance to see him in-person coaching. He was very energetic and it was contagious.

“He walked me through some of their reads and I get a lot of knowledge every time we talk football.”

In the future, McCord is just hoping those calls from his future position coach come a little later in the morning.