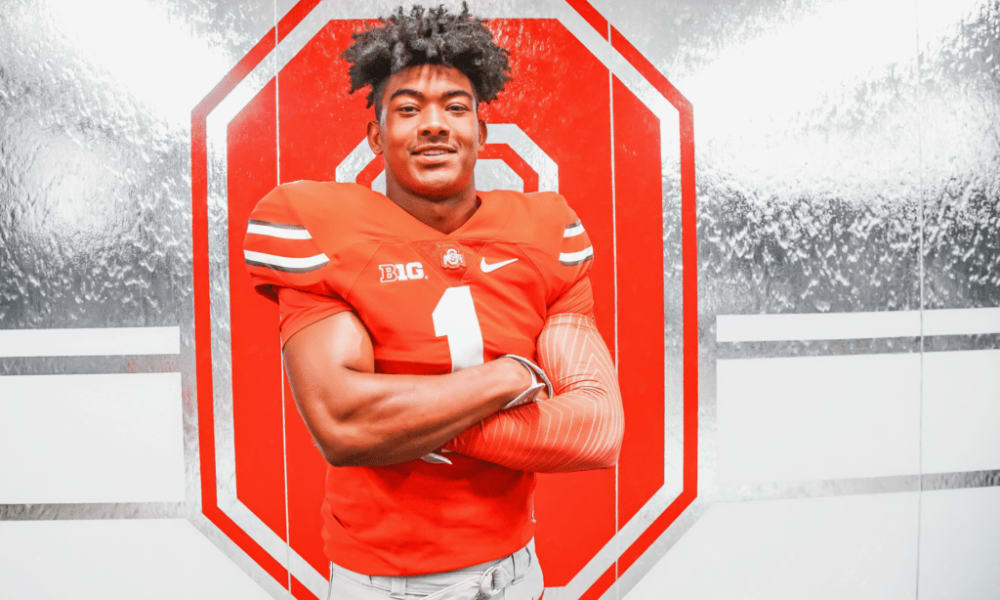 Ohio State offered a big-time 2020 prospect from Michigan over the weekend, and it seems that they’ll be very involved in the recruitment of wide receiver Devell Washington moving forward.

The offer from the Buckeyes is the sixth for the 6-foot-4, 200-pound Washington. And clearly, it’s one that he’s excited about with the possibility of becoming a member of Ohio State’s Zone 6 unit.

“It’s crazy, but a fun kind of crazy,” he said. “I’m still numb about everything. I’m so happy to get this offer.”

The opportunity came on the heels of Washington’s performance at Friday Night Lights with the Buckeyes. The chance to work alongside Zach Smith and Urban Meyer left an indelible impression on Michigan’s 13th-ranked 2020 player.

“After seeing some of campus, the football facilities and the Horseshoe on Friday, it felt like I was at home,” Washington said. “Coach Meyer and Coach Smith are awesome, and I would love to play for them. An offer from Ohio State changes the game for anyone, honestly.

“[Smith] was awesome. He gave me a lot good feedback. He liked my size a lot and he talked to me about Mike Thomas and Noah Brown, since we are similar in size.”

Even for a young man that grew up rooting for Michigan? That’s where the rubber will meet the road for Washington, who has scholarship offers from each school.

He earned his offer from Michigan after running a 4.48 in the 40-yard dash during a recent Wolverines camp. Offers from places like Ohio State and Michigan are life-changing for any high school recruit, but especially for a kid from the Midwest. His uncle is former Michigan State first-round pick Charles Rogers.

Washington grew up watching the home-state schools closely, but his favorite receiver is a former Ohio State star — one that Smith and the Ohio State staff compared him to during his visit.

“I’ve always paid more attention to the Michigan schools,” he said. “But Michael Thomas is one of my favorite players, I try to model my game after him.”

The Bay City Central standout acknowledged that right now, whether it’s because of his roots or recent results on the field, the chance to play for the Buckeyes feels a bit different than the chance to stay home.

“It’s very different,” Washington said. “I’m from a small part of ‘The State Up North,’ and a lot of guys don’t get the chance to suit up for Ohio State where I am from. Washington said,

“I said the ‘State Up North,’ because Coach Meyer said I owe him pushups if I use the other word.”

It’s rare for a kid from his neck of the woods to play at Michigan, too. In fact, only two players from Bay City Central have played at Michigan in the last 45 years. No matter what Washington decides about his college future, he’s going to be a trendsetter in his hometown.

There will come a time in the near future when Washington will have to pick a side in this battle, but for now, he’s a teenager whose life has just been completely changed in a two-week span. The excitement level is obviously understandable for somebody that has a chance to stay at home with Michigan, but also could just as easily pick Ohio State or Michigan State — if and when the Spartans offer.

“I’ve been to both campuses once, so it’s hard to say right now,” he said of the storied rivals. “I know there are great facilities, a lot tradition and trophies all over. I think maybe where you grew up or someone’s personality could make it feel different.

“I do know that when you buy into or want to be a part of something, you have to be into it 110 percent.”

For now, Washington is all in with both sides of the biggest rivalry in sports. But he’s hoping to get back to Ohio State as soon as possible.

“I want to get there for the first home game of the year,” Washington said. “Sept. 1. I’ve got it circled on my calendar. I can’t wait to experience game day.”