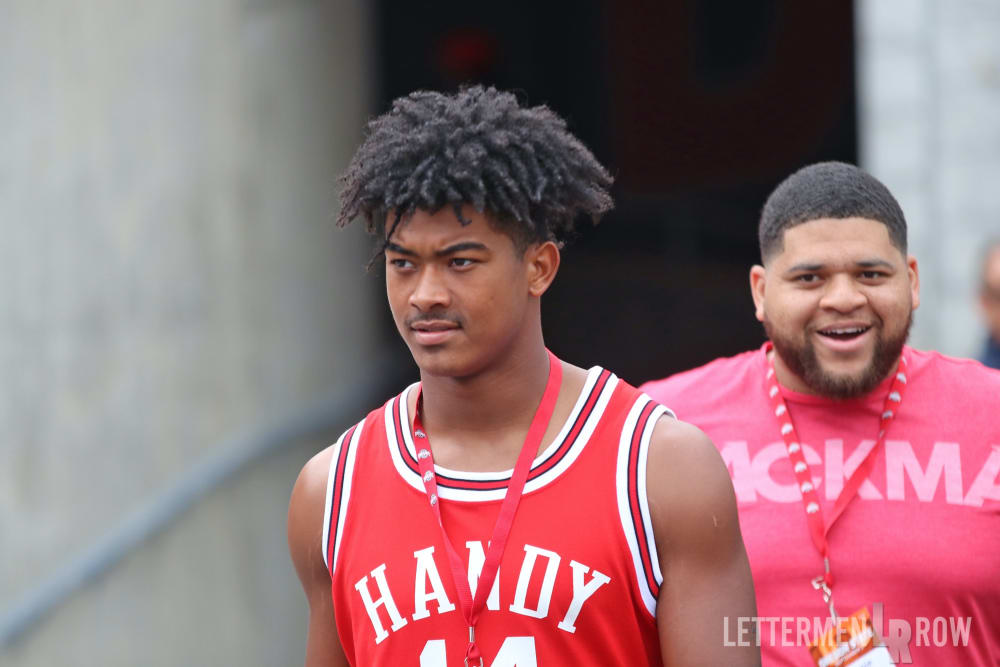 For the third time in the last seven weeks, Ohio State welcomed in Bay City (Mich.) Central wide receiver Devell Washington. Once again, the Buckeyes made a big impression on the 6-foot-4, 200-pound 2020 prospect.

“I spent a lot of time with Mark Pantoni, wide receivers coach Brian Hartline and defensive backs coach Taver Johnson,” Washington told Lettermen Row. “It was great to just be there and get a feel for everything. Coach Hartline is great, and he clearly knows what he’s doing.

“The offense, especially for a wide receiver, was exciting and I liked how many freshman played. I had so much fun. I’m ready to go back.”

That could happen again soon if Michigan’s 10th-ranked 2020 prospect can help it. He’d like to return to Columbus next weekend if he’s able to make it work. The reason for that is pretty obvious: He wants to get caught up with Urban Meyer.

Ohio State is fighting off Michigan and Michigan State for Washington’s services right now. And though he won’t name a leader, he made it clear he’s high on the Buckeyes and thrilled with how the relationship with the coaches is developing.

“I’m really high on the Buckeyes,” he said. “They said that they’ve have been watching my film and critiquing me. They like what they see, but it’s always stuff I can improve on.”

He got lost, but Rashawn Williams made it to Ohio State

Williams almost didn’t make it though.

“I ended up going the wrong way,” Williams said laughing. “I had to drive an extra hour out of my way. I got there right before the game started though.”

Being there late means losing the chance to spend quality time with the coaching staff. Fortunately for the 6-foot-1, 185-pound Williams, Brian Hartline was able to make time after the game.

“After the game I talked to coach Hartline for a bit,” Williams said. “Both him and [Buckeyes staff member] Keenan Bailey. They said they are happy that we can communicate more often without the third party since it’s after Sept. 1.”

Williams has been on the commit watch list for a few months now, but there was little discussion about that this weekend. Ohio State seems to prefer that Urban Meyer is officially back in Columbus before accepting anyone new to a commit list. Saturday’s visit for Williams wasn’t about that, though, it was about watching the evolving Buckeyes offense.

“I think the offense had a great day,” Williams told Lettermen Row. “Everyone got in rhythm early, so it set up more carries and snaps for the freshmen which was great to see. Ohio State always had great quarterbacks, and I think that would be the case in the future. It’s exciting to see.”

Ohio State also hosted a major basketball target this weekend as E.J. Liddell, a 4-star power forward from Belleville (Ill.) West High School made his official visit with the Buckeyes.

Liddell, the country’s No. 8-ranked forward and 40th-ranked overall prospect, told Lettermen Row he had a good visit.

“It was great,” Liddell shared. “I think the best of the trip was hanging out with the guys.”

That group includes Ohio State commits D.J. Carton and Alonzo Gaffney, the country’s 21st and 29th-ranked players, respectively. The Buckeyes also welcomed back 2017-18 Big Ten Player of the Year Keita Bates-Diop, a move that clearly was calculated by Chris Holtmann’s staff with the aim of putting the absolute best face forward for Ohio State.

“It’s just getting a feel what it would be like there,” Liddell said. “Hanging with guys like DJ, Alonzo, and all the players who are on the team now. It’s a great group of guys.”

Liddell has official visits planned later this month to Missouri and Kansas State and also has October trips set for Wisconsin and Illinois.

When last we spoke, we talked went over the expected visitor’s list for the Oregon State game, a list that concluded with this standard disclaimer.

This isn’t complete, and it’s not a guarantee that others won’t be added or that some won’t be removed, but it’s a good starting point for what could be a return to normalcy for the Buckeyes program.

Here are a few of the guys that didn’t make it to Ohio State:

So those guys didn’t make it, but a few other players I saw — and a few I’ve spoken with already and will have updates later this week — include:

Excited to receive an offer from THE Ohio State University #DevelopedHere ❗🌰 pic.twitter.com/9yZmzh5ldT

Milum, a teammate of Ohio State commit Doug Nester, is blowing up in terms of interest. He’s added offers from Louisville, Marshall, Virginia Tech and Ohio State in the last week, a pretty good sign that more are to come for the 6-foot-7, 245-pound sophomore lineman.

Lettermen Row hopes to have an update from Milum soon.

How does Ohio State get its recruiting groove back?
Dotting the ‘Eyes: Trey LeRoux building bonds with Ohio State, updates from opening weekend
Advertisement