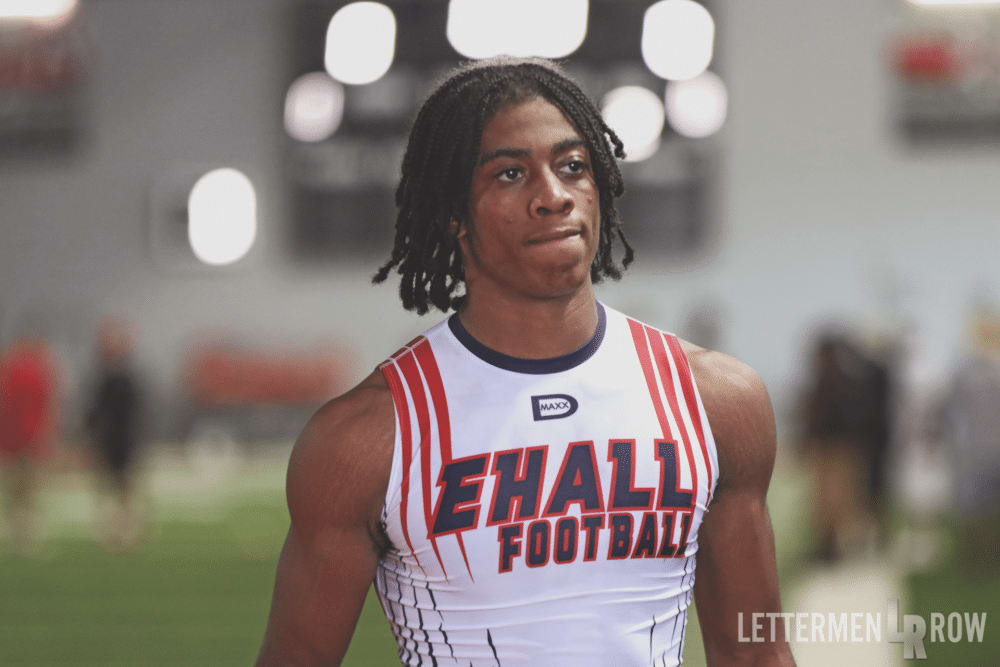 Ohio State is going to be the team to beat for 2021 defensive end Jahzion Harris (Photo: Birm/Lettermen Row)

COLUMBUS — The third iteration of Ohio State one-day recruiting camps this June has come and gone and Saturday’s outing, in a blistering 92-degree heat, was the best collection of talent to visit the Buckeyes so far.

There were more than 900 high school prospects from all over the world – yes, the world – in attendance and a number of standout performances opened the eyes of college coaches on hand.

Here are the biggest storylines from Saturday at Ohio State.

Ohio State has not always “owned” the city of Cincinnati, but if the Buckeyes are going to establish real recruiting dominance in The Queen City, there’s no better time than now.

The state’s top prospect in that class, offensive lineman Paris Johnson, Jr., plays at St. Xavier. He’s a physically imposing kid at 6-foot-7 and 285-pounds, but a pair of teammates from Cincinnati Princeton High School may find themselves in a battle for the top spot in Ohio before everything is said and done.

Darrion Henry, a 6-foot-5, 255-pound defensive end, and Jaheim Thomas, a 6-foot-4, 208-pound linebacker, were each at Ohio State on Saturday and boy were they impressive. Their frames are one thing – and Thomas looks like a kid who will end up more in the 6-foot-6 range – but the work ethic displayed by each was as impressive as anything. For two players that are nationally ranked already, they looked hungry and were ultra competitive.

I don’t know if Henry remains a defensive end at the next level, I personally saw him as a more of an inside guy, but there’s a ton of upside for each and they could be anchors on the defensive side of the ball in the Class of 2020.

The next man up from Erasmus Hall

Curtis Samuel, Jahsen Wint and Matthew Jones have helped pave a pretty comfortable road from Erasmus Hall (Brooklyn, NY) High School to Columbus and the next man up is Jahzion Harris. He made his second trip to Ohio State for camp – he was on campus last summer before he ever took a high school snap and ripped off a 4.64 in the 40-yard dash at 6-foot-3 and 175-pounds. Now at close to 190 pounds, Harris was back on campus with the Buckeyes and he’s developed his frame nicely in the last year.

There are still three years of high school ball left for Harris, but he holds an Ohio State offer already and barring a substantial change of heart, it seems like he’s pretty comfortable admitting that he’s got a soft spot for the Buckeyes. Harris’ teammates, he told the media after the camp, call him “Mr. Ohio State” in the locker room and there’s no doubt he’s comfortable with it.

He’s one of 15 prospects in the Class of 2021 with an Ohio State offer and the Buckeyes will have another two years build on a rock-solid relationship and to develop him into the player they think he can be.

He’s skinny, but he’s got the frame and explosiveness to be a really special player at the next level.

Brayden Wood is another name to know for 2021

Colorado’s top-ranked 2021 prospect, defensive lineman Brayden Wood, was in Columbus and was thrilled to get a chance to work with Larry Johnson. Wood, whose father has a long-time relationship with Tony Alford, was solid all day working with the extremely talented line group.

Doctors have told Wood that they expect him to grow to upward of 6-foot-5, the same height as his brother, though right now he’s a still growing 6-foot-2 and 245-pounds. He camped at Clemson earlier in the week and though the Tigers – like the Buckeyes – haven’t offered yet, he was given high marks by their staff. Wood and his father arrived on Friday and spent the day with the Ohio State coaching staff and touring the campus.

He’s definitely a name to watch.

Erick All camps, but was it enough to get Buckeyes offer?

Fairfield (Ohio) tight end Erick All was in attendance as expected and worked out for Ohio State’s coaching staff, looking to secure an offer from the Buckeyes.

It didn’t happen, at least not yet, and if I’m being honest, I am not optimistic that it will. All ran well, in the 4.7-4.8 range, but at just under 6-foot-4 and 212 pounds, didn’t look like an Ohio State tight end prospect looks, in my opinion. I know the Buckeyes just offered a player of similiar stature earlier this week (West Virginia’s Brenton Strange), but I don’t see the frame for All to put on weight like I do with Strange.

Erick All came to Ohio State looking for an offer and it didn’t come…yet. (Photo: Birm/Lettermen Row)

The good news for Ohio State is that he’s not in a hurry to make a college decision, telling the media after camp that he’ll look at a decision during his upcoming senior season, so there’s plenty of time to evaluate him moving forward.

All will camp at Michigan on June 18, and has an offer from the Wolverines, but they were not among top three schools he listed on Saturday, so it’s safe to assume that Jim Harbaugh’s squad hasn’t been putting the pressure on him yet.

Canton (Ohio) native Darvon Hubbard was on Ohio State’s campus for the first time Friday Night Lights last July and the now Scottsdale (Ariz.)  resident flashed talent indicative of the top 2020 prospect that he is.

Hubbard is a solid 6-foot-tall and 200-pound back. He has excellent burst and body control, though he wasn’t great catching the ball on Saturday afternoon. The Buckeyes are interested, as you’d expect, and he’ll be back on campus for Friday Night Lights on June 22 after one-day camps at Michigan and Michigan State in the coming days.

The Buckeyes are always cautious when offering Ohio kids, and that’s the case now, even though this one lives in Arizona. Hubbard said he thought an offer would come on Saturday and that he felt Tony Alford was close to pulling the trigger. Another strong performance, this time at Friday Night Lights, could be the big moment.

Fort Wayne (Ind.) Snider offensive lineman Randy Holtz, who measured in at 6-foot-7 and 342-pounds, was probably the biggest kid on campus with Ohio State on Saturday. He told Lettermen Row that the Buckeyes have been very upfront with him about where things stand in his recruitment.

Randy Foltz is what an offensive lineman is supposed to look like. (Photo: Birm/Lettermen Row)

“It’s really about my grades,” he said following the camp. “I didn’t take my schoolwork seriously and I’ve got to get my [stuff] together. They said I would have an offer if not for that.”

Usually, when you see high school linemen, they look like big kids with a lot of room to grow, and a lot of “baby fat.” There’s none of that with Holtz. The rising junior is absolutely massive and solidly built. This is a kid with a college-ready body right now.

Ohio State has offered 12 different offensive tackles already in the Class of 2020 and Holtz, if he gets his academics in order, could be on that list. I got the sense from talking to him that an offer from the Buckeyes would difficult for him to turn down.

He currently has five offers, including Purdue, Boston College and Toledo.