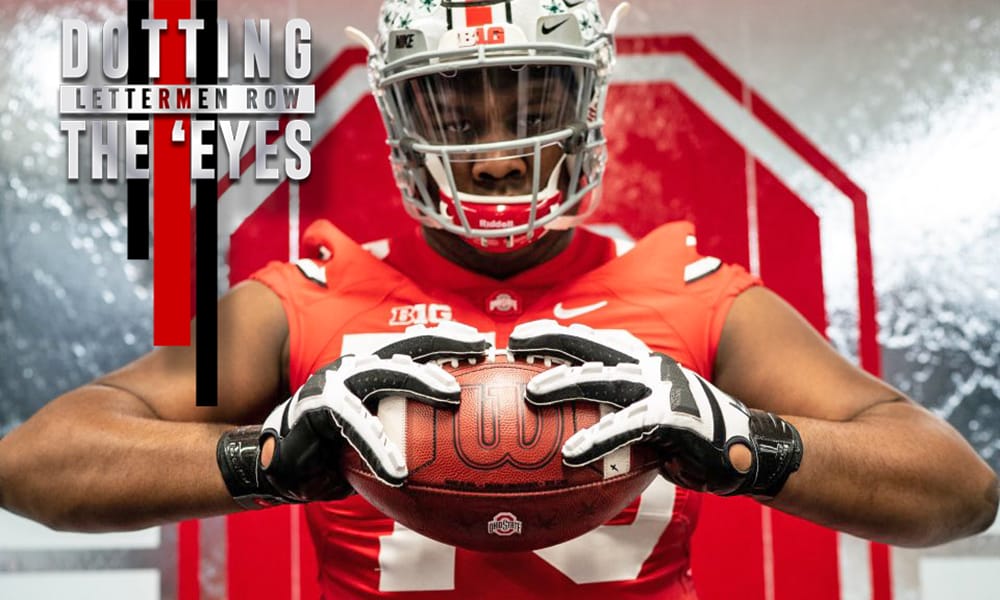 Dawand Jones is three weeks from a decision, and Ohio State is his top school. (Dawand Jones/Twitter)

Stay in touch or be left out because Ohio State recruiting is a 24-hour, seven-day-per-week obsession. What’s the latest news as the Buckeyes build for the future? Get that and more Sunday through Thursday on Lettermen Row. Today’s discussion is about Dawand Jones’ visit and the reaction from a St. Louis star to landing an Ohio State offer.

Forced to reschedule his arrival at Ohio State because of the winter storm that was barrelling down on the Midwest this weekend, Dawand Jones and his mother actually made it to Columbus on Friday night. His Saturday basketball game had been canceled, allowing for him to get out of Indianapolis early.

He and his mother had an unexpected chauffeur.

“[Buckeyes assistant] Kevin Wilson drove us to Columbus,” Jones told Lettermen Row. “We got into town about 1 a.m. on Friday night. It wasn’t too long of a drive.”

Wilson made the trek to Indianapolis to watch Jones play basketball on Friday night, and he ended up driving Jones back to campus. It’s another telltale sign that Ohio State is willing to literally go the extra mile to land the 6-foot-8, 360-pound offensive tackle. His official visit weekend was a hit from the start, according to Indiana’s 13th-ranked 2019 prospect.

“The brotherhood here [is impressive],” Jones told Lettermen Row. “Just being there and really building a bond with the recruits.”

Jones spent most of his weekend with Buckeyes offensive lineman Josh Alabi, but also was happy to get to know players like Harry Miller and Doug Nester. Heavily recruited by Ryan Day and Wilson, Jones is confident that offensive line coach Greg Studrawa can get him to be the best lineman he can be, even if he hasn’t yet spent much time getting to know Studrawa.

“I haven’t spent a lot of time with [Studrawa],” he said. “But I know he can develop me like he’s done everybody else.”

With another official visit left to take, Jones is still trying to decide which school will get it. He is sure which school is at the top of his list.

A decision is expected on Feb. 6.

Ford is currently unranked, but the 6-foot-4, 215-pound athlete had a monster sophomore season that is likely to turn him into a hot commodity on the recruiting trail in the very near future.

“My hard work is paying off and people are taking my recruiting seriously,” Ford told Lettermen Row. “I have nine offers now, and my other offers are from Alabama, LSU, Kentucky, Tennessee, Minnesota, Iowa, Nebraska and South Dakota.

“This past year I had 17 sacks and 82 tackles. I was named first-team all-conference at defensive end and Defensive Player of the Year in the Missouri Conference. I broke two school records, too, for most sacks in a game and in a season.”

Ohio State was clearly impressed by the tape, and Ford is very interested in the program at this early stage and plans to visit in the next few months.

“I love that Ohio State is one of the top football programs in the nation and close to home,” Ford said. “Ezekiel Elliott came from the ‘Lou out of John Burroughs. I’m looking forward to getting there in the spring to find out more about their program.

“Coach Hartline was really cool and I’m excited to meet Ryan Day and [defensive line] Coach [Larry] Johnson on my visit in the spring.”

Mohan camped at Ohio State last summer, and New York’s fourth-ranked 2020 prospect has started to pick up a lot of momentum on the recruiting trail. Aside from the Buckeyes offer, he’s also added offers from Penn State, Miami and Mississippi State since the start of January.

A 6-foot-1, 195-pound athlete who is versatile enough to play in the secondary or at wide receiver, but physical enough to play linebacker, Mohan’s junior highlight tape shows off his explosiveness.

“His speed off the edge is very scary and he has the right measurables at 6’1 195. Our players have faired very well in college so the name brand of Erasmus Hall has been holding weight.”

Ohio State has already offered 2021 Erasmus Hall defensive end Jahzion Harris, and it’s likely both he and Mohan return to Columbus once or twice before the start of next football season.

If there is concern about the state of the Ohio State basketball program following four straight losses by the Scarlet and Gray, take a deep breath and try to be optimistic: There are major stars coming into Chris Holtmann’s program next season.

All three of the 2019 signees were nominated on Sunday to be named McDonald’s All-American Players, one of the country’s highest accolades for prep basketball players.

🏅Congrats to all three of our 2019 signees on being named as nominees for the 2019 McDonald’s All-American game❗️#GoBucks pic.twitter.com/gQDmEIb0w3

Ohio State’s most recent McDonald’s All-American? D’Angelo Russell in 2014. We’ll see if Alonzo Gaffney, D.J. Carton and E.J. Liddell will join this prestigious fraternity on Thursday when the final rosters are revealed.