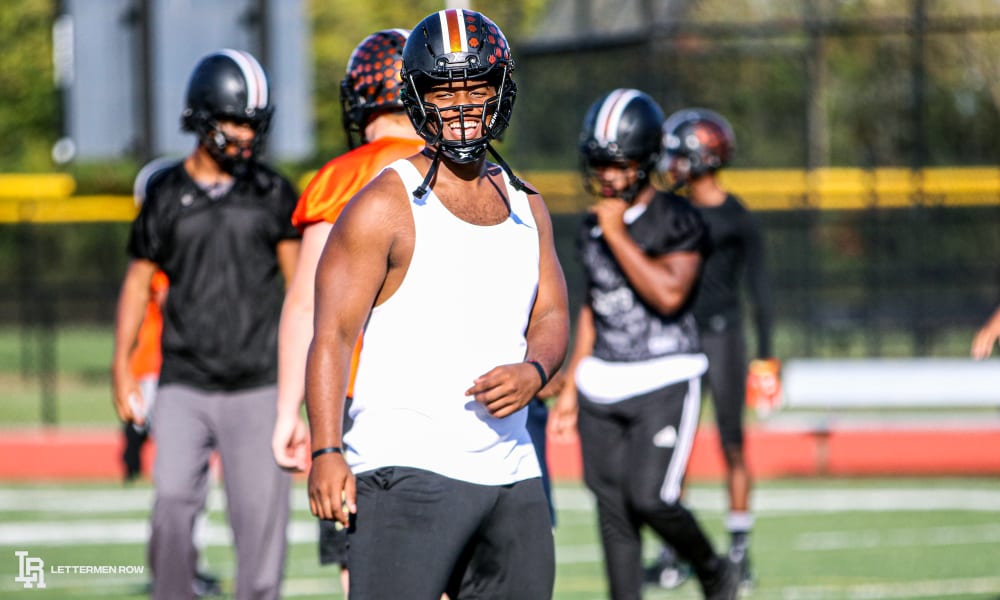 Ohio State target Damon Payne wants to leave Michigan for college, but his recruitment is still up in the air. (Birm/Lettermen Row)

BELLEVILLE, Mich. — Damon Payne took his position and checked to make sure his teammate was lined up properly behind him. Then he fired the ball 14 yards away, between his legs, like it was his job.

One of his jobs, anyway.

At almost 6-f0ot-5 and 290-pounds, Payne is the longsnapper for his Belleville Tigers. He’s also the starting left tackle — and, of course, the team’s stopper on the interior of the defensive line.

The willingness to do whatever it takes to help Belleville is one part of what makes the nation’s sixth-ranked defensive tackle such an intriguing prospect. Ohio State thinks so, as does Alabama, LSU, Michigan and pretty much every other major program in the country.

“I actually don’t mind,” Payne said after playing nearly every snap of the Tigers practice on Thursday. “It makes me a better player, and it helps my team. It’s my driving force for now. Everything I do is for my team, I lay it out for them. I put so much into this, for years, there’s nothing that’s ever motivated me like this does.

“If I mess something up, it could mess up my whole team. If someone else messes up, it throws me off. So yeah, for now, I don’t mind.”

That phrase isn’t meant to suggest that Payne will become a more selfish player as he matures, of course. He’s just aware that there’s a future beyond Belleville for him and the priorities and responsibilities will change.

He thinks about that future and sees it beyond the state of Michigan, not just Belleville. That’s a not recruiting secret, it’s becoming a well-known piece of the puzzle in Payne’s recruitment.

“Yeah, I really want to experience something different” Payne told Lettermen Row. “I want to go somewhere that I can be the best athlete I can be. Sometimes people are like: ‘Why aren’t you going up the street?’

“But I am just going to do what’s best for me.”

That’s also not to say there aren’t programs in his home state that can provide him those opportunities. But right now Michigan’s top-ranked junior prospect doesn’t see himself staying home. There are two schools regularly discussed in his recruitment — Ohio State and Alabama — but he isn’t solely focused on that pair of national powers.

Damon Payne has a lot to consider before making a college decision. (Birm/Lettermen Row)

“All the schools have caught my attention,” he said. “Pretty much all of them are the same right now. I am just looking for a place I can see myself. A place where my family can see me going, and somewhere that I can learn who I am on and off the field. Right now, my family likes everyone too, that’s what makes it even harder.

“I want to be somewhere and make sure we’re all on the same page.”

The 247Sports.com crystal ball predictions for Payne only include two predictions, but both are in favor of Ohio State. He laughed when asked how many times he’s been to Columbus before talking about his relationships with the Buckeyes, and he knows he’s a major target for the 2021 commitments already verbally committed to Ohio State.

“Shoot, I’ve been there a lot,” Payne joked. “I like to just go there and hang out. I talk to the other guys and it’s pretty cool cause we don’t have to talk but we see each other at camps and schools and stuff and it’s like, football is a big family. We can always talk.

“When I visit I like to just go there and watch the entire defensive line. I watch lines to see if I can see myself doing that kind of stuff. The times I’ve been there, Larry Johnson has shown me a lot of different things, and then I take it back here and it works. Mostly my conversations at Ohio State are with Coach Johnson.”

Payne doesn’t deny that he likes the Buckeyes quite a bit, even if every program recruiting him still has a chance. It’s Johnson who makes the difference, though, but it’s also a continued barrage of conversation about Johnson from other programs that keeps Payne from making any sudden decisions.

“That’s one of the reasons why I am taking my time in this whole recruiting process, because I hear it a lot from other schools that he’s going to retire soon,” Payne said. “I don’t really know how to take that yet. You don’t know what’s true when you hear one thing from one place and something else from another. You just have to hope for the best, I guess.”

With more than a year before he can sign a Letter of Intent anywhere, there’s no reason for Damon Payne to hurry anyway.