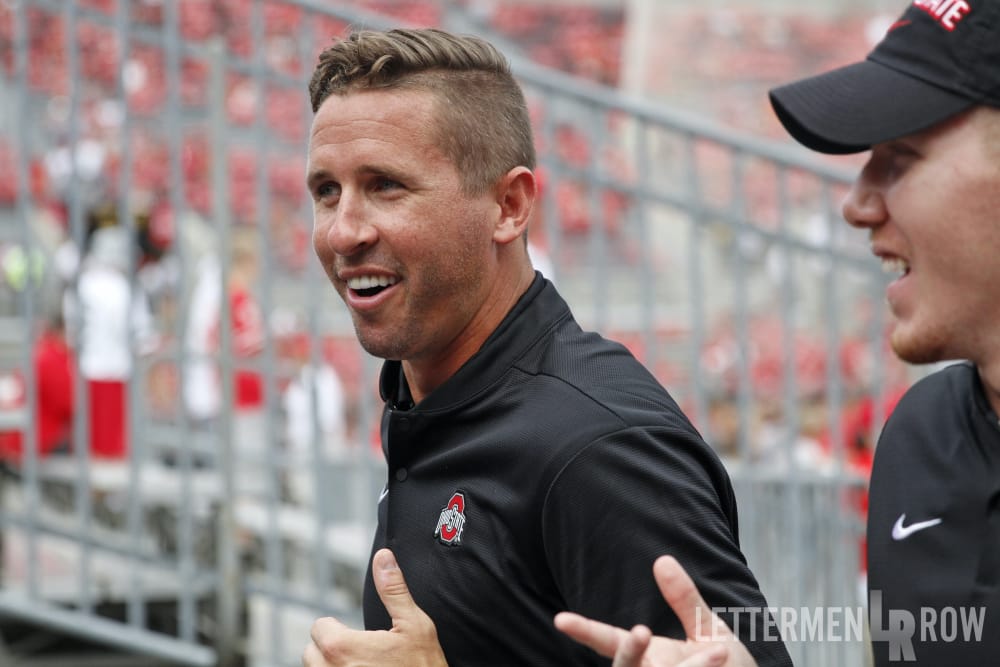 Brian Hartline's recruiting has led to a lot of smiles so far in his short coaching career. (Birm/Lettermen Row)

Have a question about Ohio State recruiting? This is the place for you, five days a week. Submit your questions on Twitter or on the Lettermen Row forums. Check in daily to see what’s on the mind of Buckeyes fans all over the country. Today we take a deeper look at what could be a very good problem Ohio State and receivers coach Brian Hartline gets faced with in 2020.

If a scenario happens where guys like Rosemy, Jarret, Fleming and more all want in at receiver, what happens?

Is Ohio State really in a position to have to say no to a 5 star WR down the road?

I wanted to include two tweets for today’s column because I know that the second question quoted is one that many wonder about as the Buckeyes have surged in the recruitment of Julian Fleming, Rakim Jarrett and Marcus Rosemy, three 5-star receivers in the Class of 2020.

To address this, let’s state first what should be obvious: it’s going to require one hell of a recruiting job by Brian Hartline, Ryan Day and the rest of the Buckeyes coaching staff for this sort of fantasy class to ever come to fruition. If somehow that did happen? There’s not any world where Ohio State would tell any one of those future NFL players “Thanks, but no thanks.”

So, on the first point yes, unequivocally, that has happened to this point. Hartline has shown a really fantastic ability to connect with the young players he is recruiting and the Buckeyes are no doubt very much in the mix for each of those guys, to the point that I’d say they’re in the “Top 2” for each. The young Ohio State assistant has landed two players he coveted in the 2020 class already and with Gee Scott and Jaxon Smith-Njigba already verbally committed to the Buckeyes, that has allowed Hartline a little advantage because his focus at this point can be significantly more narrow than most of the programs he’s competing against.

But there are a lot of moving pieces in recruiting that can’t really be counted on. Having great relationships right now is great, but Ohio State is still forced to show these three young stars that the program isn’t going to take any steps backwards under Ryan Day and that’s something that only happens when college visits are made and when there’s actual football being played. All three receivers are expected to visit this spring and Fleming has no plans for a college choice until next winter, but even if — somehow — Ohio State landed a commitment from Jarrett and Rosemy before then, there’d be no let up in the chase for the Pennsylvania 5-star.

And there’s no doubt that Jarrett and Rosemy would likely still take visits elsewhere, because it’s 2019 and this is the world of recruiting. It’s the wild, wild west in Florida every year and the Baltimore/D.C. area is taking on a bit of that same personality right now.

So would Ohio State “say no” to a 5-star wide receiver in 2020 even if saying yes meant they’d take five players at the position? No, no they wouldn’t.

But they’re not likely to have to, either.