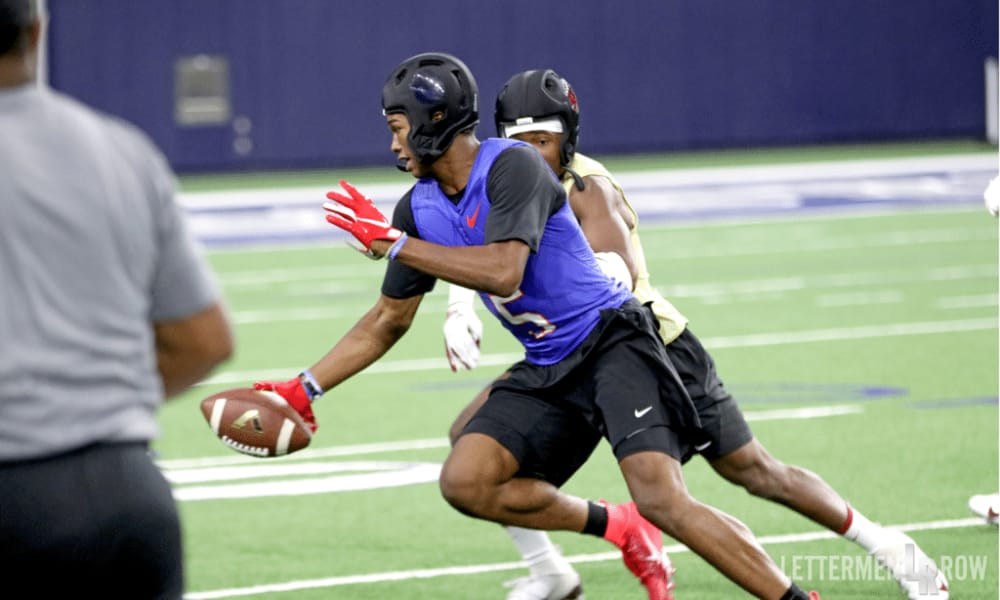 For the most part, they did just that.

Wide receiver Garrett Wilson, offensive linemen Harry Miller and Doug Nester and defensive back Jordan Battle each stepped into the pressure cooker with the nation’s best high school football players and proved they belonged alongside that elite company.

It wasn’t a week full of non-stop victories for the Ohio State commits, but for the most part these future Buckeyes represented the program in a way that would make the most earnest fans proud. Let’s break down their performances.

Garrett Wilson has earned his place at the top of the class.

The thing about Wilson is that he’s just so smooth. He doesn’t pop out in person like some other wide receivers do, at least off the field, because he’s just about 6-foot-1 and a relatively slight 180-pounds. But this kid is explosive athletically. It’s a “coast, coast, coast, explode” kind of thing, if that makes sense.

I’ve compared Wilson to a faster version of current Ohio State wideout K.J. Hill, and I will stick with that. I think Hill is vastly underrated by Ohio State fans and media, and I believe Wilson can make a big impact early in his career.

At The Opening, Wilson has been one of the two most consistent wideouts and pass-catching threats alongside California’s Kyle Ford. He’s already a 5-star wide receiver ranked as the No. 2 overall wideout nationally, so I don’t expect he’ll move too far up the rankings, if at all.

But this kid has big-time potential. On top of that, the Dublin, Ohio native is a great kid. Totally as advertised.

That shouldn’t be the case when he leaves. Miller wasn’t perfect here in Dallas, but he was consistently better than Webb was from my vantage point and showed a truly superb competitive spirit. Every time Miller would lose a rep, he’d bow up and come back with a winning turn right after.

Ohio State is getting a future captain and a superstar offensive lineman with Harry Miller.

Ohio State gets a good one in defensive back Jordan Battle

The Buckeyes most recent 2019 commitment came into The Opening as the 10th-ranked safety in the country. And though he’s being recruited by Ohio State a cornerback, I think he’ll pick up a rankings bump at safety following a really strong performance here in Dallas.

Battle runs really well at 6-foot-1 and 190 pounds and has a knack for being around the football. He picked off two passes in pool play and was generally disruptive in coverage from the safety position There’s a lot to like here with Battle, who told Lettermen Row that it’s going to be very difficult for any other school to push him away from his Ohio State commitment.

Ohio State’s commits all fared well during the time in Dallas, but if there’s one guy that will go away from the event with the most to learn, it’s Doug Nester.

I don’t believe that’s entirely his fault. But nonetheless, I won’t be surprised if he takes a hit in the national rankings following The Opening — much like former 5-star offensive lineman Josh Myers in the Class of 2017.

The rational here is simple: Nester’s offense doesn’t pass the ball, and the one-on-one drills here are meant to test your abilities as a complete offensive lineman.

Nester has continued to get bigger, meaner and better in the times that I’ve seen him. But there’s plenty of work to be done as he’s moved all around the line. I did find it very interesting that Nester said he preferred to play on the inside of the offensive line, because that’s what I’ve long felt he should play despite an entire prep career at tackle.