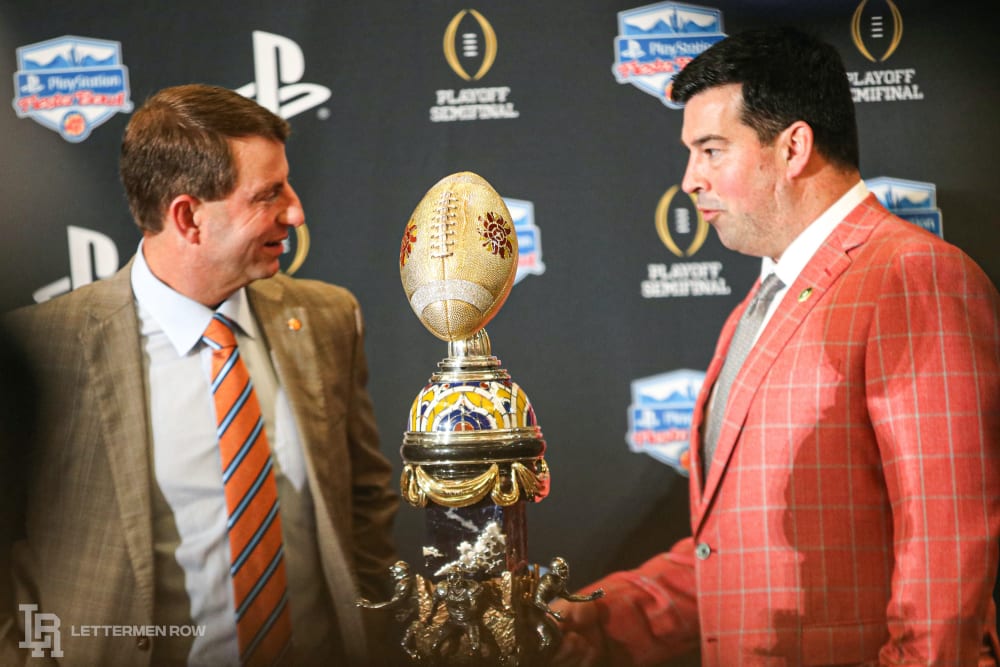 Ohio State and Clemson have gotten familiar on the field and in living rooms across the country. (Birm/Lettermen Row)

PARADISE VALLEY, Ariz. — The story of the Jackson Carman recruiting saga isn’t new for either Ohio State or Clemson.

A former 5-star offensive tackle from Fairfield, Carman picked Clemson over the Buckeyes in December of 2018 and dealt Urban Meyer a rare in-state recruiting loss. The Tigers also issued Meyer two of his just nine losses while serving as the man in charge of the Buckeyes during his seven seasons leading the program.

With so much focus on Alabama in the early years of Meyers tenure during a chase that culminated in a national championship in the first college football playoff six seasons ago, Ohio State wound up failing to catch the Tigers by the tail. That chase continues, and for the second time in four seasons, the College Football Playoff serves as a proving ground for two of the country’s most talented programs.

To put it bluntly, Little Ol’ Clemson has become a big ol’ pain in the ass for the Buckeyes.

And the Ohio State coaching staff knows it. Clemson is now the program everyone is chasing.

“It is an honor to play a team like Clemson that has really set the standard here in the last couple of years,” Ryan Day said Friday morning. “[They are the] defending national champs, 28-game winning streak with the combination of talent and coaching is some of the best in the country.” 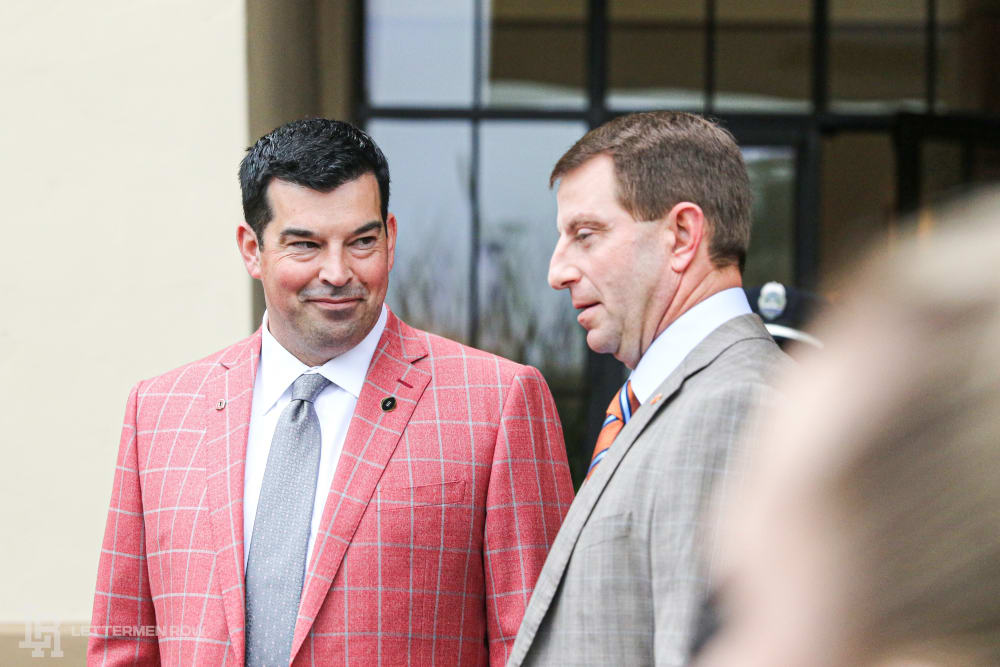 Ryan Day and Ohio State — along with the rest of the country — are watching Clemson with an envious eye. (Birm/Lettermen Row)

The battles between the Buckeyes and the Tigers play out first in living rooms around the country. Clemson proved they belonged in the rare air that only Ohio State and Alabama could breathe up to that point with the 31-0 beatdown they gave the Buckeyes when they met in this same venue in 2016.

The lifeblood of any college football program is recruiting. And in the last handful of seasons, Ohio State’s biggest adversary has become Dabo Swinney and Clemson, and that game proved they belonged in the conversation. Even when they’re not going head-to-head for a recruit, the success of the schools combined with a couple of clear differentiators often means the cream of the recruiting crop chooses one of these elite programs.

It’s just personal taste that lends an advantage to one or the other.

Three seasons after that game, Clemson sits comfortably with the country’s best recruiting class in the 2020 cycle after signing six different 5-star prospects. The Tigers didn’t beat Ohio State for any in-state prospects this time around. But in head-to-head battles for stars like Bryan Bresee, Clemson never felt challenged despite Larry Johnson’s long-time relationship with the country’s top-ranked player.

Ohio State’s class is well positioned also, checking in at No. 3 in the national rankings right now, with — of course — Alabama resting between them.

The truth is that the country’s most successful programs are all pretty similar. In fact, they’re usually much more alike than they are different, at least when it comes to what happens when you get into the football program.

“I visited Clemson five times,” Ohio State signee Jacolbe Cowan told Lettermen Row. “I think what makes both programs successful is the elite recruiting classes that they get every year. In order to contend for a national title each year, you must recruit well and both programs do an outstanding job.

“These programs stand out from others because of the guys that they develop and put into the league.”

Cowan found Ohio State to be more genuine in his recruitment, which ultimately led to his decision to pick the school. But that’s not a knock on Clemson. Some players discover connections with different coaches, and Clemson’s defensive line class has been full for a while now — so it’s not likely that the Tigers had a spot for Cowan which probably led to some of that disconnect. 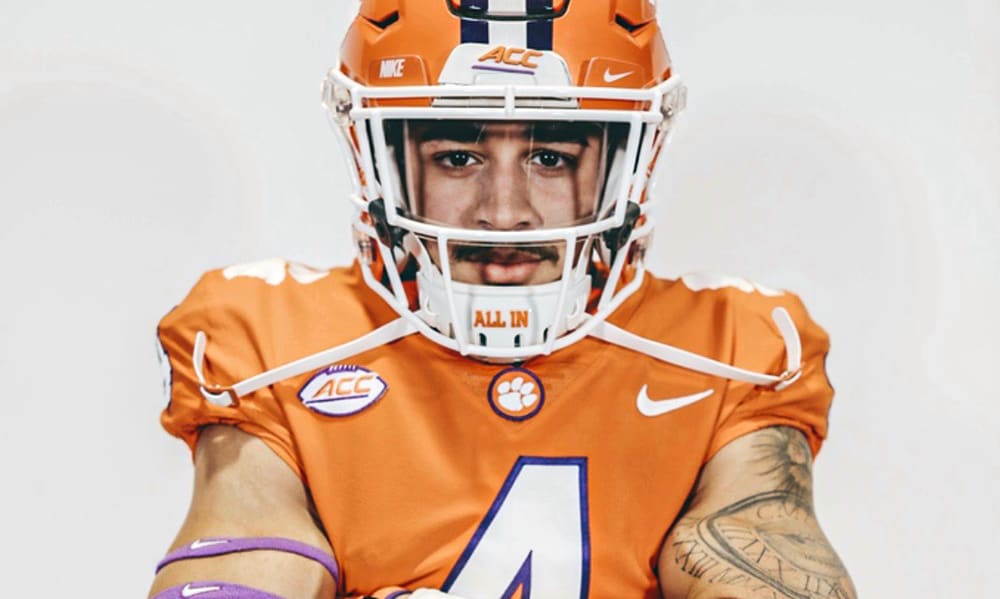 Clemson was the runner-up in the recruitment of 5-star wide receiver Julian Fleming. (Julian Fleming/Courtesy)

There’s no doubt Clemson had room for Julian Fleming, the country’s No. 1-ranked receiver in the Class of 2020. He picked the Buckeyes, and for Fleming, there were a few major differences between two programs who usually see similar results.

“Both schools expect to be perfect, and both coaching staffs expect perfection,” Fleming told Lettermen Row. “They’re both great programs and they do have some similar things going on. But a lot sets them apart from each other. At Ohio State, I like the city. It’s a very different feel from where I live now and the change of scenery helped a lot in recruiting me.

“I’ve been in a rural area my whole life, so it’s a nice change.”

For Clemson safety K’Von Wallace, who dreamed of playing for the Buckeyes growing up, it was the rural feel of Clemson that he felt he needed. He grew up in the city and worried that he’d find trouble in a place as big and varied as Ohio State.

“You try to go to a winning program, but at the end of the day, you have to pick the school that’s right for you,” Wallace said during Thursday’s media day. “For me personally, I know who I am. I had to be in an atmosphere that was smaller and it was very hard to get in trouble. I felt Ohio State would be easy to get in trouble, it’s a big city. I grew up in a city. I’ve seen a lot of things happen and I didn’t want to be in a city.”

In talking to recruits, the common theme among them was the difference in geography. Ohio State won the battle for Fleming, but the Buckeyes and Tigers are among the favorites for 2021 receiver prospects Beaux Collins, Emeka Egbuka and Troy Stellato. That trio comes from the metropolitan areas of Los Angeles, Seattle and Miami. For that trio, the decision could ultimately come down to whether or not they want the same change of pace that Wallace did.

“They’re both so successful because they’re not afraid to be different,” Collins, a 5-star junior receiver told Lettermen Row. “They recruit a certain type of guy that they know will be great on and off of the field.

“The biggest difference would have to be their locations and atmosphere around the college.”

Collins is a teammate of D.J. Uiagalelei, the top-ranked quarterback in the Class of 2020, who signed with Clemson. He’s also the teammate of Ohio State linebacker signee Kourt Williams, who is a finalist for the All-American Bowl’s Man of the Year, an honor he shares with fellow Buckeyes signee Paris Johnson and three current Ohio State freshmen. When Uiagalelei picked Clemson, he cited the program and Swinney’s focus on faith as a primary reason. If a recruit and his family aren’t particularly religious, that could work against the Tigers — as it did with Fleming.

“Their coaching staff is very religious,” Fleming said, adding to what he felt were differences in his experiences at Ohio State and Clemson. “A lot of their quotes and things were related to the Bible and the coaches talked a lot about players going to church on Sundays. They didn’t really push it, it was just sort of implied.”

On Saturday night, the Buckeyes and Tigers will meet in the desert with dozens of future NFL players lining up between the two sides. The two schools, with the country’s two longest winning streaks, have taken the same road to get here and will continue to provide their players and recruits with a clear-cut road to football success.