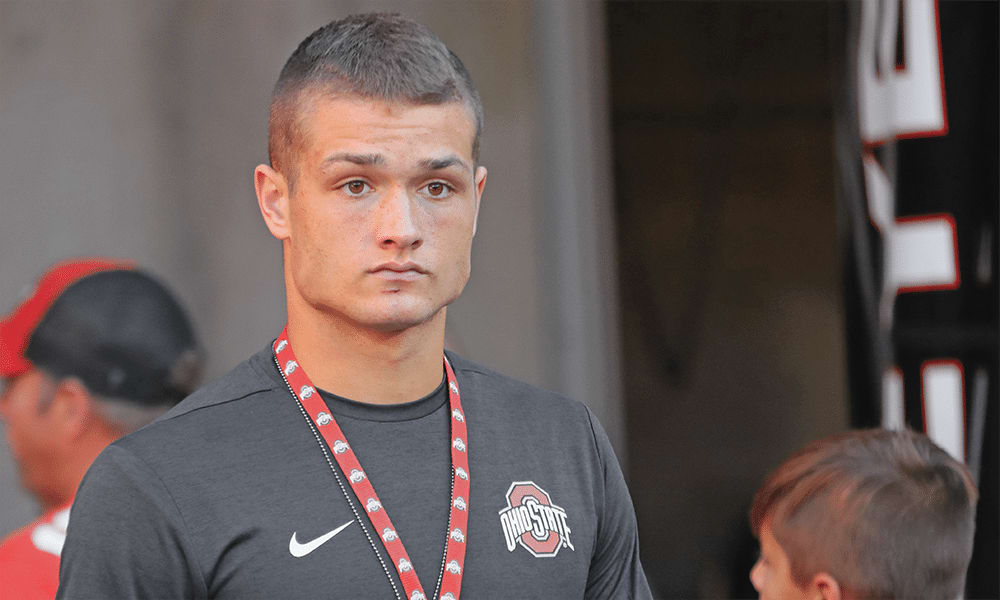 LEXINGTON, Ohio — Anybody familiar Cade Stover knows there really couldn’t have been another way for him to announce his commitment to Ohio State.

When Stover, the country’s No. 8-ranked outside linebacker prospect in the Class of 2019, issued his pledge to the Buckeyes, he did it his way.

“That video, that’s him,” Lexington coach Taylor Gerhardt told Jon Spencer of the Mansfield News-Journal following that day. “He wakes up, he goes to work (on the farm), comes to practice … where he has fun, and then he goes back to work. That’s what I love about the video. He’s not a flashy guy. … It’s, ‘You know what, that’s who I am. I load the tractor, I go to work and that’s the way I work when I play football.’ That’s Cade Stover. Period.”

Ironically for the 6-foot-4, 225-pound Stover, his football dreams were never bigger than his basketball ones. Lexington is a small town that loves its hoops and he has grown into a talented basketball player, now just 91 points away from becoming his school’s all-time leading scorer.

“I could never choose a favorite sport,” Stover told Lettermen Row. “Lexington, the town, is completely basketball oriented. My class has always been gifted in basketball. My dad coached us, we lost one game from third grade through sixth grade.”

The affection for basketball notwithstanding, Stover’s best athletic future is on the football field. He’s seen his success start to turn the town’s attention from the hardwood to the gridiron.

“Our crowds have gotten a lot bigger,” he said. “When I was in eighth grade, the football team went 0-10. As a freshmen we were 6-4 and made it to the regional finals my sophomore year. Last year we had a setback, but this year we’re hoping to bounce back.”

Stover is a now football player, and he’s proud of it. But more than that, he’s a down-to-earth kid who dreamed of playing football at Ohio State his whole life and representing his family and hometown in a way that would make people proud. It’s who he is that has kept him level-headed through a recruiting process that often changes people.

“When finally you get here and get this opportunity, it honestly makes you work twice as hard.” — Buckeyes 2019 LB commit Cade Stover

“I give every bit of [credit] for that to how I’ve grown up,” Stover said. “Being on the farm, like when all my friends – weekend after weekend – they’ll go out or to birthday parties when I was young, and I can’t go that weekend. We were bailing hay or hauling cows. Growing up, from 2 or 3 years old and having discipline like that? It’s always taught me: ‘Don’t take anything for granted.’

“That’s definitely the beauty of a small town. Everybody knows I’m me. You’re looking at what you get.”

Stover loves his life on the farm still. He intends to major in agribusiness at Ohio State and knows that his life after football will bring him back to the same humble roots that crafted him. That didn’t stop him, like most kids growing up in Ohio, from dreaming big. It’s his life now that helps him realize he can’t change what he’s doing just because he’s gained a little fame.

“My uncle took me to an Ohio State football game when I was eight years old, maybe seven,” Stover told Lettermen Row. “We sat in the nosebleed seats. That’s when [former Buckeyes All-American James] Laurinaitis was playing. We’d look down and he’d say ‘God, you can you do that one day.’ I was like, ‘You’ve got to be a freaking superstar to go do it.’

“When finally you get here and get this opportunity, it honestly makes you work twice as hard. You have a chance, an opportunity to be one of those guys.”

Despite those dreams, Stover’s level-headedness kept him from leaping at the Buckeyes offer too soon. Ohio State offered him a scholarship more than a year before he accepted it. He admitted that one of the primary reasons for not accepting it right away was because so many seemed to expect him to. He didn’t want to just follow “directions.” Maybe there’s some normal teenager in Stover, after all.

“In a sense there is,” he said when asked about the pressure of staying home. “But Ohio State being the stature that is for Ohio kids, you want to play for the best program in the country. For a lot of people, and for me, Ohio State is.

“I guess in the back of my mind, I always kept Ohio State at the top and always compared [other schools he visited] to what they had. As far as the coaching staff, the program itself, the facilities, the agriculture program – what I want to go into – and as far as the people, that’s a big thing. The players. When I took my official [visits], that’s what really set it apart for me. The players at Ohio State are so down to earth.”

This spring, he’s avoided the recruiting camp and combine circuit, the hype machine that produces “stars” and tons of stories because he’s where he wants to be already. Nick Bosa never needed to run the circuit in order to be a good football player, neither does Stover. He is focused on improving himself, period.

“Those things don’t matter,” he said. “I’m just going to work on being the best me I can be.”

Stover burst onto the national recruiting scene after his sophomore season for the Minutemen, and now he’s projected as an outside linebacker and a Top 150-ranked player overall. The accolades aren’t important at this point, at least not compared to the work and what comes next.

“You don’t come [to Ohio State] not to work,” he said, harkening back to talks with current Buckeyes offensive linemen Josh Myers and Max Wray, who he spent most of his official visit to the school with. “[Josh and Max] said it’s the hardest thing they’ve been through, it’s the hardest program in the country. That’s also why they’re so successful in what they do.”

Though he plays safety for Lexington, Stover became a linebacker prospect following an Ohio State camp in the summer of 2017. Most people thought he’d end up playing defensive end in college when he was first attracting attention. Predictably, he’s not concerned with where he plays, just that he does.

“As long as I’m chasing down the ball carrier,” he laughed, when asked if he has a true preference about his eventual position.”I personally see myself being 255-260 pounds, that’s just naturally what my body is going to do. That’s what my dad did, and that’s what I’m built for. Whatever suits the team, wherever I fit, I’m personally fine with either one.

“I’m just excited to see what they can do with my body. I know I’m 100 percent all the time, and so I never have to worry about that. I’m just going to do that and let [Buckeyes strength coach] Mick [Marotti] just take me and do what he can.”

Stover will be at Ohio State as often as he can this summer and through the football season, working to improve his relationships and his game. He will not, though, be enrolling early with the Buckeyes, despite knowing that it could help him find the field a bit faster as a freshman in 2019.

“I’ll be finishing my full senior year,” Stover said. “We were in the state final four last year in basketball and we started one senior with us. We bring back our whole class.”

That, in a nutshell, is what makes Cade Stover special. He sees the big picture and knows the value enrolling early at Ohio State would have for him. But this isn’t about just him. It’s about his farm. His family. His friends. How could he walk away from the guys he’s grown up with when they’re on the verge of accomplishing a life-long dream?

“A state championship is something we’ve dreamed about since second grade,” Stover said. “We’re a bunch of unselfish kids and honest to God, best friends. I can’t leave with that work left to be done.”