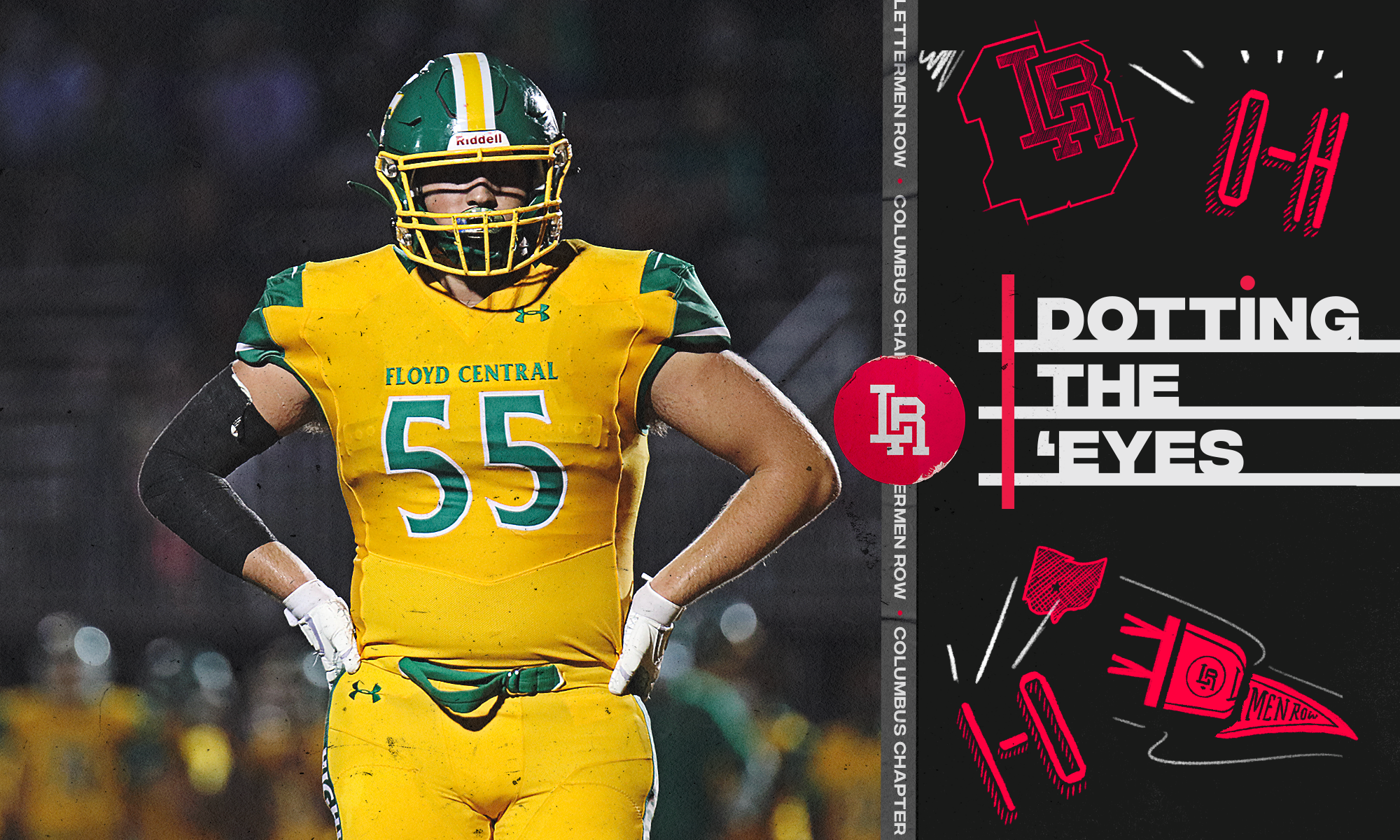 Zen Michalski has some big decisions to make about his recruitment. (Birm/Lettermen Row)

Stay in touch or be left out because Ohio State recruiting is a 24-hour, seven-day-per-week obsession. What’s the latest news as the Buckeyes build for the future? Get that and more Sunday through Thursday on Lettermen Row. Tuesday, we look at the decision of Zen Michalski to decommit from Louisville and what could come next in his recruitment.

The Buckeyes could be close to adding commitment No. 20 to their 2021 recruiting class, and that possibility became more real on Monday night when Zen Michalski decommitted from Louisville to reassess his recruitment.

The Floyd’s Knobs (Ind.) offensive tackle, a 4-star prospect according to 247Sports.com, talked with Lettermen Row about his process over the weekend and has been vocal about his interest in Ohio State since being offered by Greg Studrawa and Ryan Day last month. The interest had been primarily driven by the communication with Studrawa and Buckeyes assistant offensive line coach Kennedy Cook because there’d been no chance for the 6-foot-6, 290-pound tackle to see what the Ohio State program has to offer in person. Although he is still waiting for that opportunity, he and his father did make a trip to Columbus on Sunday to get a better idea of what the Buckeyes home turf is all about.

“The visit to Columbus was absolutely amazing,” Michalski told Lettermen Row as they departed for home on Sunday night. “We were blown away by everything the city has to offer.”

Though there was no contact permitted with Ohio State coaches during the on-campus portion of his visit, Michalski was able to get a good feel for the area and saw most of the things he wanted to see — from the outside.

“That was annoying,” he said of not being able to talk to the staff at Ohio State. “But I really just wanted to get the vibe of the city and campus. We saw almost everything around the city, the campus, athletic buildings, the stadium, etc. It was all awesome.”

Penn State offered Michalski on Sunday night as he was driving home from Columbus. The Nittany Lions are hoping to get him to do a similar visit to Happy Valley, but it remains to be seen if that will happen. There’s no timeline for a new decision for Indiana’s No. 3-ranked prospect, but he intends to enroll early and wants to be settled on a choice sooner rather than later.

The Buckeyes have two offensive linemen committed, and Zen Michalski may be on the verge of being the third.

Buckeyes Bash date is set, commits trying to get to town

One of the bigger recruiting stories of the summer is the way that recruits have tried to get together without the assistance of the coaches they’re set to play for as a result of the everlasting NCAA dead period.

Ohio State commitments have been working to create their own version of that event, dubbing it the “Buckeyes Bash,” but had been struggling to get it all scheduled and set up.

Well, the date is set. It just so happens to coincide with what should be the Ohio State home opener on Oct. 24. A number of current Buckeyes commitments are expected to attend — most should be there with the exception of Donovan Jackson — and there’s a push for a few big-time, non-committed prospects to show up as well.

The details of the planned weekend are still being worked out, but it seems like there will be at least one major recruiting weekend for Ohio State this fall.

“I think everyone is going to bring a sleeping bag,” Jack Sawyer, who will host the class at his house, told Lettermen Row. “I think damn near everyone is coming. It’s going to be a real fun weekend.”

If the Ohio State commitments get their wish, one of the players visiting on the weekend of Oct. 24 will be 5-star receiver Emeka Egbuka. He was expected to visit Oklahoma for a similar soiree in August. But those travel plans fell through and then the dead period was extended through the end of 2020, seriously hampering the Sooners chances of upsetting the Buckeyes efforts to eventually land a commitment from him.

Oklahoma added its third wide receiver commitment in the Class of 2021 on Sunday, and while that isn’t a death knell for their pursuit of Egbuka, it certainly helps provide one more piece of recruiting tinder for Ohio State. The discussion around Egbuka’s recruitment right now is focused almost exclusively on the Buckeyes and Sooners, so every little bit of data helps.

If a decision is coming anytime soon for the country’s top-ranked receiver, it seems likely he’ll find a way to Ohio State next month. Oklahoma has commitments from three of the nation’s top-25 receivers, Ohio State has two.