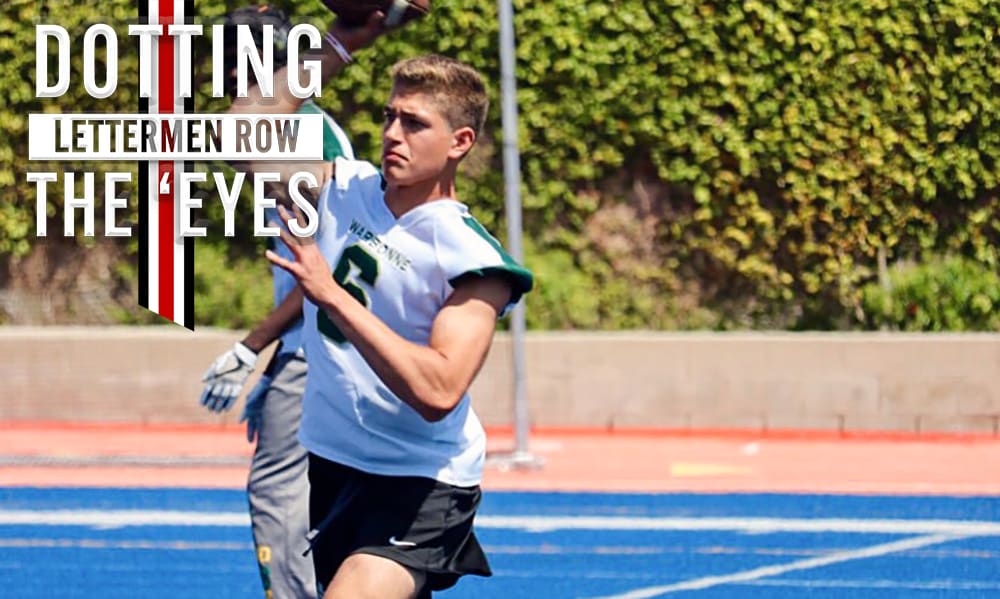 Stay in touch or be left out because Ohio State recruiting is a 24-hour, seven-day-per-week obsession. What’s the latest news as the Buckeyes build for the future? Get that and more Sunday through Thursday on Lettermen Row. Today’s update checks in on California 2021 quarterback Jake Garcia, a Florida standout sets an Ohio State visit and more.

The conversation about 2021 quarterbacks has included J.J. McCarthy, Kyle McCord and Drake Maye, but to this point there hasn’t been much talk about Narbonne (Harbor City, Calif.) 4-star prospect Jake Garcia. Offered by Ohio State on Jan. 29, Garcia may be the prospect furthest away from Ohio, but he’s got the attention of the coaching staff.

They’ve got his attention as well.

“I’ve had quite a bit of contact with them,” Garcia told Lettermen Row. “I have been able to get on the phone a couple times with my quarterbacks coach and the Ohio State staff.

“They say that they really like my film and feel like I am a very good fit for the offense and are excited to get me to Columbus. The relationship I have with Ohio State is already closer than most schools.”

The Ohio State brand is strong in California these days thanks to Ryan Day’s West Coast experience in the NFL, and Garcia has noticed that in conversations with his peers.

“Whenever I talk to people about the Buckeyes, the response I always get is something along the lines of: ‘That’s big-time football right there,'” he said. “I have always thought very highly of Ohio State.”

The Buckeyes are one of a handful of programs trying to make a connection with the 6-foot-2, 185-pound Garcia. He has offers from 15 schools and is hoping to get to see Ohio State in person in the near future, but it will likely not be until the summer or later. He already has trips to Auburn, LSU, Alabama and Arizona State planned for the next month — and then April visits to Florida, Florida State and Miami.

“I don’t have a date planned yet, but I am discussing it with my family on a good time,” he said. “I am definitely excited to see what it’s all about.”

Last Sunday afternoon, Dotting the ‘Eyes reported that Norwalk 2020 offensive lineman Trey Leroux was going to be back at Ohio State this weekend — and he was, arriving on Friday morning. Leroux spent the entire weekend in Columbus as his brother participated in the state’s high school wrestling championships, but the highlight of the trip for the 6-foot-8, 320-pounder came Friday afternoon.

After a great talk with coach Day, I am blessed and humbled to receive an offer from THE Ohio State #OH @CoachStudOL @ryandaytime pic.twitter.com/sorofguoAa

Ohio State offered Leroux, the state’s 38th-ranked prospect. And with that offer, the program puts itself in a position to land a commitment from another in-state lineman in the near future. The timing, like the offer and commitment from Jakob James in January, feels unexpected. But it’s another sign that things are going to be done a little bit different at Ohio State under Day’s regime.

The Buckeyes need six offensive linemen in the Class of 2020, and if Leroux commits, he’ll be the fourth to say yes to Ohio State. That means Day, Mark Pantoni and Greg Studrawa can focus on landing two more of their major targets from around the country while not worrying about falling behind and losing out in-state prospects that they’d likely come back around to months from now.

That, however, doesn’t mean it’s a done deal between the Buckeyes and the massive lineman. For months Leroux has been recruited by Ed Warinner and Michigan. His father is a Michigan fan, so there’s a little family pull away from the Buckeyes if the rivals decide to offer.

It’s clear that if Michigan offers, it’s only because Ohio State did. But that’s still a good reason for anybody hoping to steal one from the Buckeyes.

Ohio State has been one of the favorites for Apopka (Fla.) 3-star athlete Jecoryan Davis-Hamilton for months, and he’s talked about visiting since September.

The country’s 59th-ranked athlete now has a date. He’ll be at Ohio State in early April.

“I’ll be at Ohio State the first weekend of April,” Davis-Hamilton told Lettermen Row. “It’s an unofficial visit. I’m going with my aunt and my parents, I’ll be there Thursday to Saturday.”

The Buckeyes are one of the 12 programs that have offered the 6-foot-1, 185-pound defensive back prospect. He’s maintained regular contact with a pair of Ohio State coaches.

“I talk to Ryan Day a lot,” he said. “I didn’t really talk to Urban Meyer like that. I talk to Coach Day and [running backs coach Tony] Alford. I’m looking forward to seeing everything up there.”

“I’ve actually just been in contact with Coach Washington,” he said. “I’m going to get up got a spring practice within the next few weeks.”

A few weeks have passed and the 6-foot-4, 310-pound Edwards proved to be a man of his word, arriving at Ohio State on Friday morning.

“I like it up here,” Edwards told Lettermen Row on Friday. “I really liked everything about the practice. I talked with [Buckeyes defensive line coach Larry] Johnson and he wants me to get back up this spring and build a relationship with him.”

The fact that Edwards was talking to Johnson is noteworthy. When we talked to him first in February, most schools were recruiting him as an offensive lineman — but the Buckeyes are not.

“Coach Johnson told me if I went there he would see me as a defensive tackle,” Edwards said. “He said he knows I can play there, but will I do what it takes to be great? Building a relationship with him is key. Hearing that was just great. I’m going to do everything it takes to take my game to the next level and perfect my craft.”

Expect to see Edwards back on campus at Ohio State this spring at least once more and for him to make a camp appearance or two in Columbus this June.