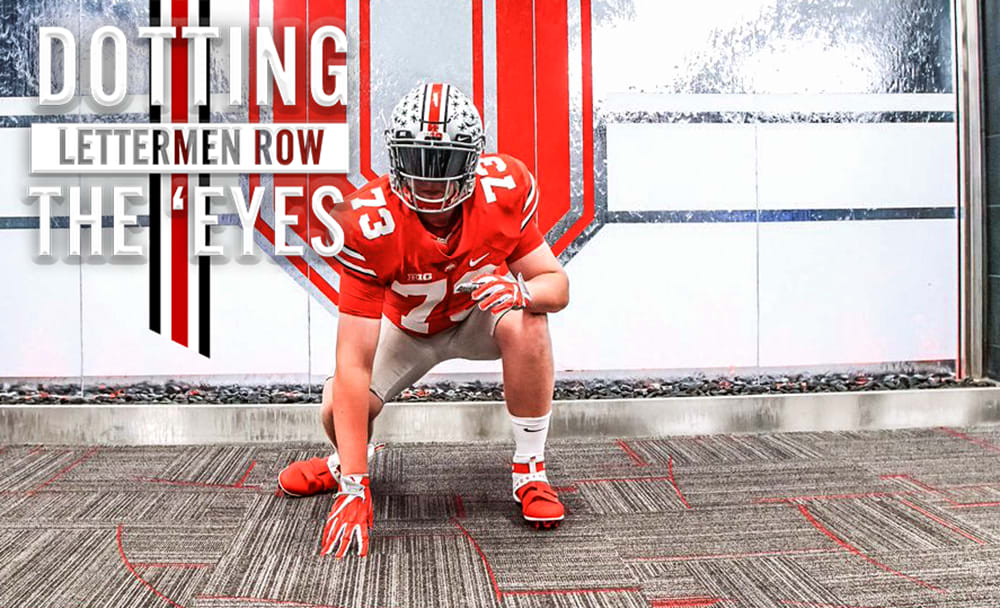 Reece Atteberry made a spring visit to Ohio State, and his family continues to think about the Buckeyes. (Reece Atteberry/Twitter)

Stay in touch or be left out because Ohio State recruiting is a 24-hour, seven-day-per-week obsession. What’s the latest news as the Buckeyes build for the future? Get that and more Sunday through Thursday on Lettermen Row. Today’s update checks in with Colorado lineman Reece Atteberry’s situation and a young receiver hoping to impress the Buckeyes this summer.

It’s been a few weeks since the most recent visit to Ohio State for 4-star offensive lineman Reece Atteberry. The country’s fourth-ranked center prospect in 2020 is being recruited by the Buckeyes as a versatile player who could play anywhere along the line, and he spent a late-March weekend in Columbus that his father Mark assessed for Lettermen Row.

Ohio State has long been a favorite school for the 6-foot-5, 280-pound lineman. But this visit was bound to be different than previous ones simply because there’s a new guy in charge of the program.

“This visit was very detailed and involved,” the elder Atteberry said. “Shoot, we were there both days from about 7 a.m. to 7 p.m. — watching practices and meetings. Then, of course, we had one-on-one meetings with everyone.

“We were very impressed — more than before — with everyone. Ryan Day is much more involved in everything, both physically and in voice. The vibe was intense and high tempo.”

For Atteberry, what was important on this trip was to spend more time getting to know Buckeyes offensive line coach Greg Studrawa.

“What that man does on a daily basis for his offensive line crew, in both personal lives and practice film break down, etc. — he has zero time for much else, let alone sleep,” Mark Atteberry said. “He was very, very personal. He got to get closer to us, and we are as real as they come with character and honesty. So, the mutual respect was on point.”

Mark Atteberry expects his son to take an official visit to Ohio State in early June.

Ohio State is still searching for its first 2020 defensive line commitment, and on Monday it hosted one of the country’s top defensive line prospects — a player the coaching staff has been high on for a while.

That is Knoxville (Tenn.) Catholic 4-star defensive end Tyler Baron, who made the trip north to Columbus from Cincinnati, where he dominated the Under-Armour regional camp over the weekend.

Baron told Lettermen Row that it was a “great” visit, and sources close to the Buckeyes side of things agreed. Ohio State insiders are hoping and expecting that the 6-foot-5, 255-pound end will return to campus this summer.

Baron is the country’s ninth-ranked strongside defensive end and the No. 7-ranked player in the state of Tennessee. He’s been primarily recruited by running backs coach Tony Alford, who handles that region for Ohio State, but Larry Johnson will also continue to get more involved from here.

The Buckeyes search for a pair of tight ends in the Class of 2020 continues to expand with the recent offer to Gruver (Texas) 4-star prospect Jalin Conyers.

Blessed and Humbled to receive an offer to play football at THE Ohio State University! #GoBucks🔴 @ryandaytime @OSUCoachKDub @806hssc pic.twitter.com/HRDAjrTC52

“I’ve been hearing from Ohio State for about two or three weeks,” Conyers told Lettermen Row. “Ohio State is a very prestigious school with an amazing football program, so it’s an honor.”

Ohio State tight ends coach Kevin Wilson extended the offer and has been driving the conversation with the 6-foot-4, 220-pound Conyers, who is ranked as the country’s sixth-best tight end prospect in the Class of 2020. Though he now has almost 20 offers, Conyers recruitment hasn’t really started to take off yet, and he’s hoping to start seeing schools around the country to figure out where his next move will take him.

“I’m just looking forward to getting to more campuses,” he said. “I’ve been to Texas Tech, Baylor and Texas. I want somewhere I know can help me get my degree and has a great football tradition. We are looking for a possible date to visit Ohio State.”

Troy Stellato excited to get back to Ohio State this summer

There are a handful of big-time receiver recruits in the Class of 2021 who are already being recruited by Ohio State. This early, it’s easy to get caught up in stars and rankings and forget that some players just haven’t had the exposure yet that they need to get those big recruiting bumps.

“It was a great visit,” Stellato said. “A great experience. Just how serious they take their football. The fans and atmosphere were insane and the campus was beautiful and a lot bigger then I expected.”

Though there are no real ties to Ohio for Stellato despite having some family friends in Columbus, there are ties to Cardinal Gibbons. Buckeyes assistant receivers coach Keenan Bailey is an alum of that South Florida program, and it’s a connection that’s helped build a strong immediate bond.

“I’m starting to build a good relationship with [wide receivers coach Brian] Hartline and Coach Bailey,” he said. “I love them. They just taught me so much more about my position and I think will really help me.”

The Buckeyes have not offered Stellato yet, but don’t be surprised if that comes this summer, especially if he comes back to Columbus to camp and earn his spot as he intends.

“I will be at the camp in June for sure, because they really want me there,” Stellato said. “Ohio State is one of the top schools in the nation year in and year out, and it would just be a dream to play for them one day.”