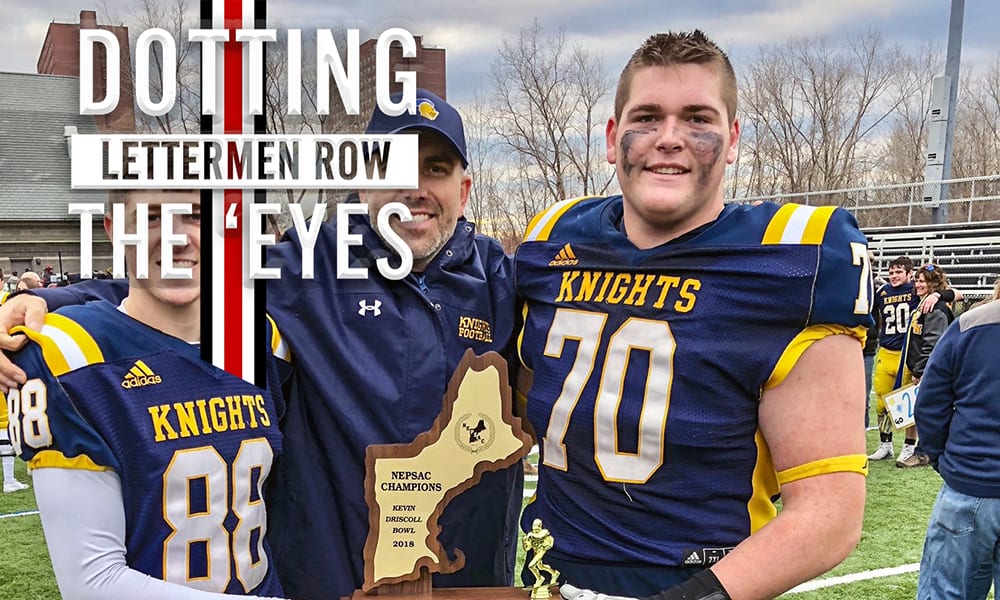 Stay in touch or be left out because Ohio State recruiting is a 24-hour, seven-day-per-week obsession. What’s the latest news as the Buckeyes build for the future? Get that and more Sunday through Thursday on Lettermen Row. Today we break down two big-name targets that have set up their first visits to Ohio State and catch up with a recently offered receiver from California.

We spoke last month with Buckingham Browne & Nichols School (Cambridge, Mass.) offensive tackle Zak Zinter, the country’s 28th-ranked offensive tackle and a player who has been working for months to get a visit to Ohio State scheduled. It’s a trip he’s wanted to arrange since the start of the 2018 season.

“I haven’t been to the school yet,” he told Lettermen Row in September. “I’m hoping to visit in the spring.”

Zinter has been to Notre Dame, Penn State and Michigan before, so there’s no doubt those trips will include a little less fact-finding than the visit to Ohio State. But in general, he’s trying to decipher the same thing from each trip.

“I’m not sure if there’s just one thing I’m looking for in a school,” Zinter said. “I have four main things I’m looking for at all the schools: high academics, really good football, seeing who can develop me the best at the next level and finding the right brotherhood for me.”

Ohio State will get their first shot to show him all that exists in Columbus in just about a month.

LV Bunkley-Shelton will be at Ohio State spring game

Another Ohio State target who will make his first trip to see the Buckeyes is Junipero Serra (Gardena, Calif.) 4-star receiver LV Bunkley-Shelton.

“I will be in Columbus for the Buckeyes spring game,” the country’s 39th-ranked receiver told Lettermen Row. “I can’t wait.”

Offered by the Buckeyes in mid-January, the 6-foot, 180-pound receiver is one of just a handful of players still being recruited at the position by Ohio State. That’s why the trip to Columbus is on the docket already and why it’s currently the only visit that California’s 19th-ranked prospect has locked in.

“I have some trips in the works, but this Ohio State trip is my main focus,” he said. “My family is coming with me and it’s the only trip I have set in stone.”

Like LV Bunkley-Shelton, Jalen McMillan is a California receiver who has recently added an Ohio State offer, picking up a scholarship opportunity from the Big Ten champions a little under two weeks ago. The Fresno product is the country’s ninth-ranked receiver and absolutely a top priority for Brian Hartline and Ohio State at this point. It’s been Hartline driving the bus here, though, and McMillan has enjoyed the chance to get to know the former NFL receiver.

“It’s going great,” McMillan said. “I talk with him just about every day.

“I like how he’s been through the process, so he basically knows what I’m going through [as a recruit]. Plus, he’s developed his wide receivers.”

McMillan has offers from more than 25 schools already, including Georgia, Notre Dame and Oklahoma. But he admits that an offer from the Buckeyes does carry with it a little bit more juice.

“I feel like Ohio State is different than a lot of programs,” he said. “Their tradition of winning and development is different.”

The 6-foot-2, 180-pound McMillan intends to visit Ohio State but has not yet set a date for that trip.

The Buckeyes are all in for Saguaro High School (Scottsdale, Ariz.) 5-star cornerback Kelee Ringo. But after Tuesday night’s offer to 2021 defensive lineman Quintin Somerville, expect to see Ohio State coaches in the hallways of the Phoenix-area powerhouse for another year.

After a great talk with Coach Yurcich, I am extremely blessed and thankful to announce an offer to continue my education and playing career at THE Ohio State University! #GoBucks ⭕️ pic.twitter.com/Ts8kQcRKEn

Somerville is an early 5-star prospect at defensive end, and the offer from Ohio State is a game-changer for him.

“That’s a big one,” Somerville said. “There’s a strong tradition of winning at Ohio State, and that’s something we’re all attracted to. Growing up watching games like that every Saturday just makes you dream of the possibility of playing in a place like Columbus.

“Their coaching staff has all of the right tools to not only make me a better player, but also mold me into a better person and set me up for the life after football.”

Though the offer came from Mike Yurcich, the new Buckeyes quarterbacks coach made sure to give the 6-foot-3, 210-pound prospect the lowdown on the men who’d coach his position at Ohio State.

“Coach Yurcich describes [Larry Johnson and Greg Mattison] as the best defensive line coaches in the country,” he said. “So when I get out to Ohio State, I’m interested in sitting down with them and seeing what their philosophies are all about in the film room.”

An Oklahoma native — his father is a “diehard” Sooners fan — Somerville has talked with his teammate about the Buckeyes.

“Kelee speaks incredibly high of Ohio State,” Somerville said. “I hope I can get out there this summer.”