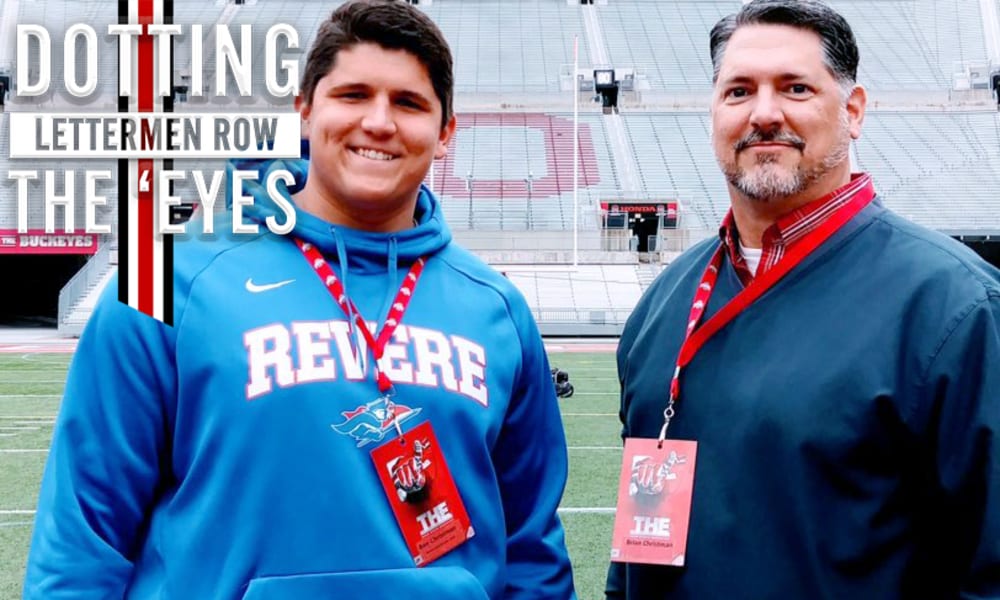 Stay in touch or be left out because Ohio State recruiting is a 24-hour, seven-day-per-week obsession. What’s the latest news as the Buckeyes build for the future? Get that and more Sunday through Thursday on Lettermen Row. Today’s update has a trio of top offensive line targets reflecting on their recent visits to Ohio State.

The Buckeyes wasted no time in offering in-state 2021 offensive lineman Ben Christman, choosing to extend a scholarship to the 6-foot-6, 299-pound sophomore at Revere (Richfield) High School in early February. One of the country’s premier 2021 offensive line prospects told Lettermen Row at the time that he was excited by the opportunity and that he would visit the school at the conclusion of his basketball season.

Basketball season is over, and Christman was in town with the Buckeyes last Friday.

I will be back! O-H… pic.twitter.com/XIUSlGpLsC

“It was great,” Christman told Lettermen Row. “Great to see them practice, and I was very impressed with how they prepare their players for life after football.”

There’s no doubt the Buckeyes should be considered the frontrunner for Christman’s eventual commitment. But he’s now up to nine offers and made a visit to Penn State last week as well. Notre Dame is in the mix, and the Irish always find a way to make things interesting with offensive linemen. So it was an important visit to Ohio State — Christman is doing his homework.

“It was my first time getting a really good look at what all of those things are,” he said of Real Life Wednesdays and the other post-football plans the Buckeyes deploy. “How they help student-athletes. It was awesome. I’d say that a lot of people wouldn’t know what the staff can do to help their players. It’s amazing.”

Christman also had an important first meeting with Ryan Day.

“He was great,” Christman said. “He said some very nice things about my future.”

There is no next visit planned for Christman, who will have track and field obligations during the Ohio State spring game.

For months, Buckingham Browne & Nichols School (Cambridge, Mass.) 2020 offensive lineman Zak Zinter has been trying to arrange a visit to Ohio State. At the end of last week, it finally happened as part of a whirlwind college tour that saw the 6-foot-6, 300-pound lineman stopping at Penn State, Michigan and Notre Dame as well.

“I had a great first visit to Ohio State,” Zinter told Lettermen Row. “It was great getting the chance to see what their program is all about and see the academic side of it as well.

“I was very impressed with what I saw.”

Day has been involved in the recruitment of Zinter from the start, and sitting down with him and offensive line coach Greg Studrawa was an important part of the trip.

“I spent a lot of time with Coach Day and Coach Stud, and both coaches made it clear that I would be a great fit for their team and would love to have me commit,” he said. “They really liked that I’ve played center, tackle and guard and that I can be versatile anywhere on the line for them.

“With it being my first visit I had a lot of meetings with academics, their Brand U program, [Ryan] Stamper with their Real Life Wednesday program. We did a photo shoot, then seeing the campus, watching practice and touring their football facilities. I would like to get back for another visit if possible.”

Ohio State made a good first impression, but Zinter has been to other schools like Michigan and Notre Dame multiple times. That means there’s still plenty of work to do if the Buckeyes hope to land the country’s 23rd-ranked offensive tackle.

“I wouldn’t say they’re trailing, but it was good to get there and start building that relationship stronger,” Zinter said. “Just to see how I felt about it. I really liked Coach Day a lot, you can really tell he’s a players coach.”

“It was a great visit,” Baker told Lettermen Row. “I really enjoyed the culture on their team and their Real Life Wednesdays.

“It was more than I expected it to be. It isn’t just a football factory. It’s a place that prepares you for the future.”

Ohio State is in the mix for Baker after his first visit, but getting him back on campus for an official visit will be key. The 6-foot-8, 275-pound Baker has thirty scholarship offers and the Indiana native will have a number of important decisions to make in the next few months.

Ohio State was expecting a visit from Sandy Creek (Tyrone, Ga.) 4-star safety Brian Branch on Monday, but the country’s 18th-ranked safety prospect was unable to make the visit.

“We got out of the Under Armour camp too late,” Branch told Lettermen Row. “My mom said she didn’t feel like driving that far by herself on the road.”

Branch was one of the top performers at that camp in Atlanta, and he earned a trip to the Under-Armour All-American game because of it. Aiming for an early-August college decision, Branch has got a plan for getting back to Ohio State.

“We’re going to wait to go back until the official,” he said. “Sometime this summer. Oklahoma, Indiana, Ohio State and Alabama [will get officials]. I don’t know the fifth yet.”