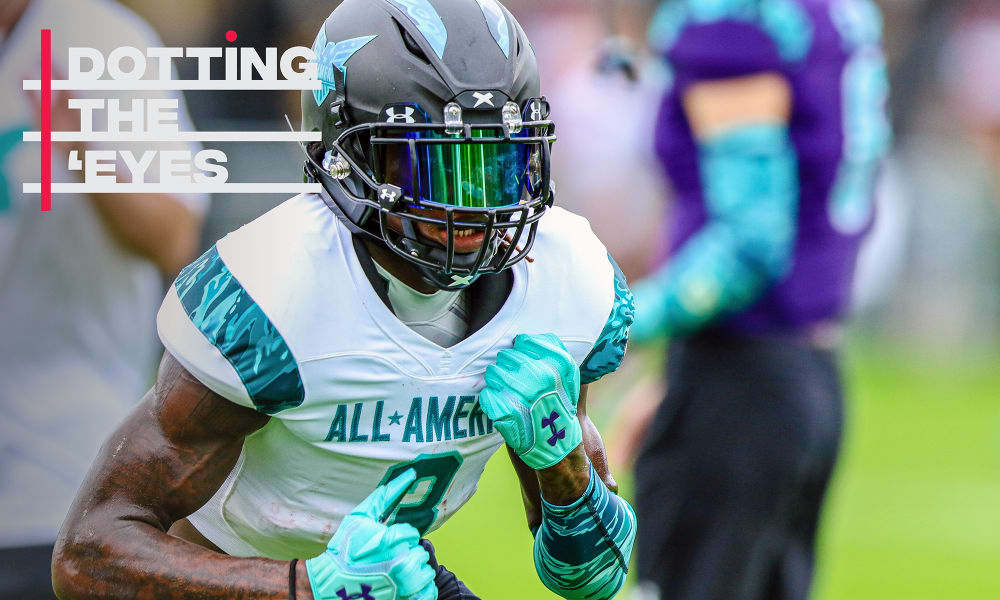 Zach Evans is too talented to completely ignore if Ohio State wants another running back. (Jeff Sentell/Courtesy)

Stay in touch or be left out because Ohio State recruiting is a 24-hour, seven-day-per-week obsession. What’s the latest news as the Buckeyes build for the future? Get that and more Sunday through Thursday on Lettermen Row. On Monday, we examine the reasons Ohio State could make a move on 5-star running back Zach Evans despite his topsy-turvy recruitment.

Will Ohio State take another look at Zach Evans?

The internet is abuzz. The speculation is rampant.

What does it mean when a college football coach follows a high school football player on a social media application?

That’s what everyone seems to be trying to figure out now that Ohio State receivers coach Brian Hartline has followed Houston North Shore 5-star running back Zach Evans on Twitter.

For the unaware, Evans is the country’s top-ranked running back prospect in the Class of 2020. He signed with Georgia in mid-December but has been released from that Letter of Intent, though the reasons for that have never been publicly discussed. Evans has been linked to a number of schools throughout his wild recruitment including Georgia, LSU, Alabama, Texas A&M, Texas and others.

Ohio State was rumored to be receiving an unofficial visit from Evans back in the summer. Lettermen Row wrote about that possible trip in June after the 5-foot-11, 200-pound running back included the Buckeyes in his final-five schools.

“Ohio State isn’t keen on bringing in players for official visits unless they believe there’s a real possibility it can land the prospect. So, if he makes the trip, this weekend is sort of a prove-it trip for Evans. A chance to show he’s serious about his interest in the Buckeyes.”

Evans didn’t make the visit at that point, as expected. Ohio State then moved on, choosing to focus on other running backs like Bijan Robinson who appeared to be more realistic options.

With Miyan Williams signed and Evans able to enroll anywhere he wants, should the Buckeyes rethink that stance?

Why is Zach Evans still available?

As programs like Ohio State consider the possibility of recruiting Evans, the holdup is definitely not his talent. Evans is the country’s top-ranked tailback because he’s very good at football, but a number of questions around his off-the-field antics have plagued him throughout the recruiting process.

Lettermen Row has spoken to a number of people who have given considerable insight into Evans and the question marks around him. Every conversation has ended with the same general conclusion: Evans isn’t a bad kid.

What he is, though, according to those who’ve been much closer to his recruitment than anyone covering Ohio State has been, is immature and often entitled. There are also concerns about some of the people around his decision-making circle and a belief that he’s not taken advantage of the potential mentorships available to him because of the high-profile nature of his recruitment.

Evans has some of the most respected high school coaches in Texas at two-time state champ North Shore. But he missed each of the last two state title games for disciplinary reasons, and those issues plagued him for a majority of his senior season. Evans did a mini-interview at the Under-Armor All-American Game with Deion Sanders by his side, speaking vaguely about his mistakes and receiving a little backup from Sanders himself.

Deion Sanders speaking up for Zach Evans: “He’s a kid. I got kicked off the team my junior year for doing something stupid. Coach let me back on, I made up for it, the rest is history. He deserves another shot.” pic.twitter.com/qG0vAuxu0D

There are a number of schools around the country that will give Evans a shot based on his tremendous talent. What happens moving forward in his career will be up to the talented but immature prospect.

This is the million-dollar question, and one that likely has no concrete answer yet.

In Columbus, the culture of the program is stronger than it’s ever been. And if there’s a program in the country suited to take on a personality risk, Ohio State could be it. If Evans is interested in taking the first step in changing the perception around him, he’d be eager to prove that in a program like the one Ryan Day runs — but he’d have to do so knowing full well that any slip up at all could cost him a second chance to play for a perennial college football playoff contender.

Ohio State is hosting Dalton (Ga.) 4-star running back Jahmyr Gibbs this weekend for an official visit. Gibbs is the priority when it comes to a second running back in the Buckeyes 2020 class — not Evans. The relationship between Ohio State and the Georgia Tech commit far outweighs any relationship with Evans no matter how many Buckeyes coaches begin following him on Twitter.

However, there’s not much in the way of optimism when it comes to getting Gibbs to leave the south for college, and the belief among those at Ohio State right now is that he’s more likely to stay committed to Georgia Tech than he is to flip to the Buckeyes.

But he’s making an official visit to campus, and Ohio State obviously has a lot to offer a young running back in this recruiting cycle.

Landing Gibbs would remove any possibility of a renewed pursuit of Evans. And for that reason, I think it makes sense that the Buckeyes would wait until after the visit from Gibbs before settling down and really diving into whether or not to kick the proverbial tires on Evans.