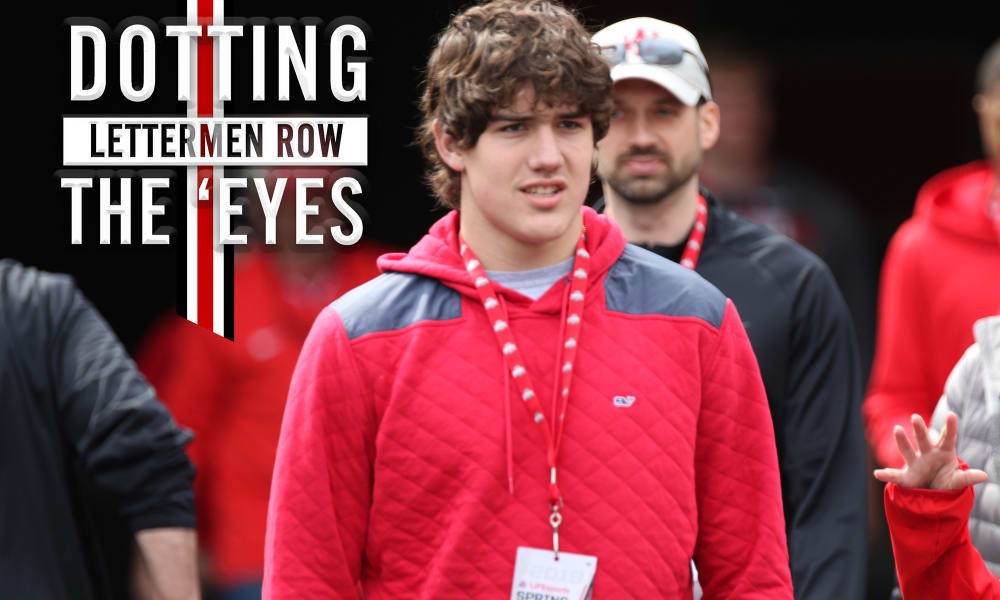 Stay in touch or be left out because Ohio State recruiting is a 24-hour, seven-day-per-week obsession. What’s the latest news as the Buckeyes build for the future? Get that and more Sunday through Thursday on Lettermen Row. Today’s update has reaction from the Spring game for recent Ohio State visitors Yanni Karlaftis, Josh Priebe and Donovan Jackson.

The Buckeyes failed to land 2019 defensive lineman George Karlaftis, but they’re off to a good start in trying to lure his brother, 2021 linebacker Yanni Karlaftis.

The West Lafayette 4-star linebacker, ranked as Indiana’s best 2021 prospect, was in Columbus on Saturday for the Ohio State spring football game.

“It was really fun,” Karlaftis said. “I got to meet a lot of people and see an amazing spring game. They did well showing me the culture. I expected a lot [from the visit], and I got a lot.”

Karlaftis and his family became very close with new Buckeyes defensive coordinator Greg Mattison — something the 6-foot-3, 205-pound sophomore talked about with Lettermen Row prior to his trip. Having him in Columbus helped make the young linebacker feel comfortable.

“My highlight of the trip was spending time with the coaches,” he said. “Getting to know them, [the family] really liked Ryan Day. They said he seems like a really genuine person.”

It’s early in the recruitment of Karlaftis, but Ohio State is in a good spot moving forward.

“We hope to visit again soon,” he said. “But we haven’t planned anything. Ohio State is at the top of my list along with a couple of other schools.”

The Buckeyes continue to search for more offensive linemen in the Class of 2020, and on Friday they offered Edwardsburg (Mich.) 3-star prospect Josh Priebe during his first visit to Ohio State.

Priebe is Michigan’s 23rd-ranked player in the 2020 class and a 6-foot-5, 280-pound tackle for Edwardsburg High School, which is just about 14 miles away from South Bend, Ind. He grew up a Notre Dame fan because of that.

“Ohio State has been in contact with me for about the past month or so,” Priebe told Lettermen Row. “I was ecstatic to get an offer from such an amazing program like Ohio State.

“I had the opportunity to sit down and talk with Coach Day and [offensive line coach Greg] Studrawa for a while and got to know them better, which is really what I was looking for during the visit on Friday.”

For a first trip to the school, Priebe left feeling very good about what Ohio State has to offer.

“I’ve always had a great respect for Ohio State and its program,” he said. “It’s a powerhouse program and has been successful for many years, and it produces a lot of top-notch guys.

“The facilities were incredible and the whole atmosphere was very cool. It was very informative and my parents liked it a lot. Especially the academic side of thing and meeting the coaches. I was very impressed walking away from Ohio State.”

Priebe has 27 offers, including Michigan, where he visited on Sunday.

With a host of former Ohio State players in attendance and a number of top prospects on hand, the spring game was designed to impress recruits and their families. It appears the goal was met with most players.

“It was a great day,” Todd Jackson, the father of 2021 4-star offensive lineman Donovan Jackson, told Lettermen Row. “The strength in athletics was expected, but it was great to learn more about the Real Life Wednesday program with guest speakers and their strong internship program.”

Jackson, the country’s ninth-ranked offensive tackle, has plenty of Ohio roots. And the father of the 6-foot-4, 308-pound lineman indicated there will be no push from him or wife to keep the young prospect in Texas for college.

“We’ve both told him he has no boundaries on his decision,” the elder Jackson said. “We’ll be there by car or by plane to support him. My wife is from Ohio, and I grew up in Cleveland.”

As for the Ohio State message to the Episcopal (Bellaire, Texas) standout? It’s simple.

“Basically they’re just wanting to let Donovan know he has a home with the Buckeyes,” Todd Jackson said. “Whenever it’s time to make the decision.”

Over the course of the last month-plus, Ohio State has paid a lot of attention to 2020 two-way lineman Terah Edwards, a 3-star prospect from Groveport-Madison High School outside of Columbus.

The hope was to bring Edwards, a 6-foot-2, 315-pound lineman with almost 25 offers, to camp in Columbus this summer and let Larry Johnson get a chance to work him out and evaluate him in person. That chance is gone now as Edwards committed to Northwestern over the weekend.

“I won’t be going to Ohio State’s camp this summer,” Edwards told Lettermen Row on Monday. “I would love to, just so I could learn some things from coach Johnson, but I don’t think I’ll be able to. I had interest in Ohio State but I didn’t think they had as much in me.”

Another name we’ve written about here in recent months is Bay City (Mich.) 2020 receiver Devell Washington. The 6-foot-4, 200-pound Washington committed to West Virginia over the weekend, the lone team in his recently released top 5 that was outside of the Big Ten. There had been little contact with the Buckeyes in the last few months, but Washington was a player offered by Ohio State last summer and he was very interested in committing last August.