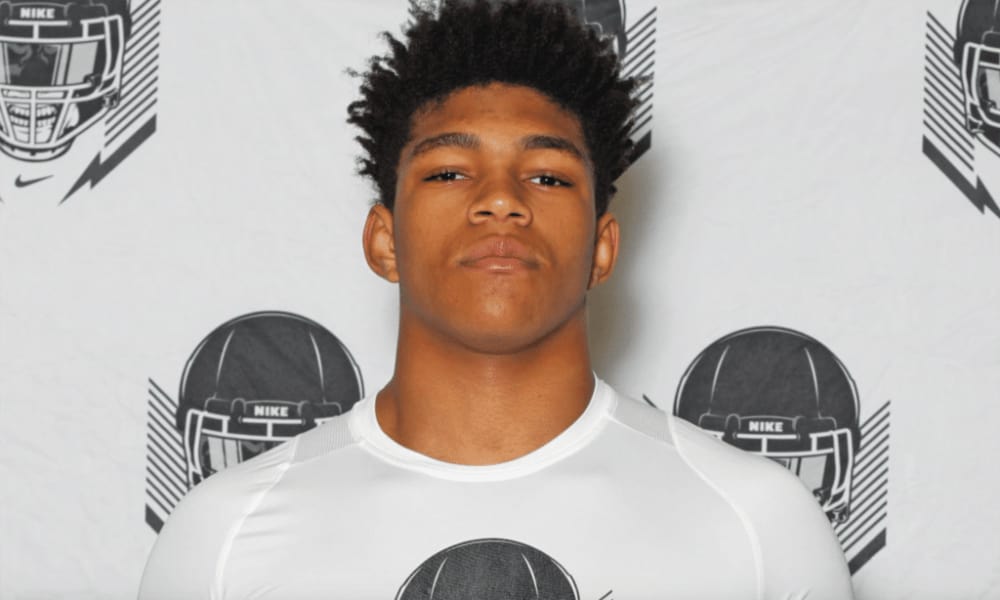 With the recent commitment of Devontae Dobbs to Michigan State, Ohio State’s recruitment of the offensive tackle position took another hit. Dobbs’ decision puts the Buckeyes in a spot where they’ll have to win a battle or two for a player that maybe they’ve not had a long-term relationship with at this point.

One of those players Ohio State will try to win over is almost certainly going to be Washington (D.C.) Sidwell Friends School lineman Walter Rouse.

Rouse is a 3-star prospect, but he has offers from Notre Dame, Stanford, Michigan, Florida, Penn State, Oklahoma and a handful of other big programs. Offers are much more important than stars, believe that. The 6-foot-6, 285-pound lineman has been building a relationship with Ohio State for months, and he told Lettermen Row that he’s finally got a date for his first visit to Columbus.

“I’m actually going there on July 25,” Rouse told Lettermen Row. “It will be my first unofficial to the school.”

Urban Meyer and offensive line coach Greg Studrawa have been the primary recruiters for Rouse. He’s looking forward to a chance to see what the Ohio State coach is all about in person.

“Urban Meyer seems focused, passionate and energetic,” Rouse said. “I look forward to meeting him face to face on the 25th of July.”

Notre Dame, Stanford, Vanderbilt, Virginia, Duke are all among the programs D.C.’s seventh-ranked prospect is hearing from the most.

Earlier this week, Lettermen Row filled you in on the Buckeyes pursuit of defensive tackles Etinosa Reuben and Jared Harrison-Hunte. Those targets are up near the top of Ohio State’s list at the position, especially with Sunday’s commitment from Grand Rapids (Mich.) defensive tackle Mazi Smith to Michigan.

On Tuesday night, another name was tossed into the mix with a scholarship offer to Wake Forest (N.C.) lineman Jaden McKenzie.

McKenzie, 6-foot-4 and 280 pounds, is the country’s 52nd-ranked defensive tackle according to his 247Sports.com composite ranking. And there’s no doubt that the offer from the Buckeyes will lead to a slow and steady climb up those rankings. He holds 15 offers from the likes of North Carolina, Tennessee, Wisconsin and West Virginia.

Ohio State has offered two tight ends in the last two weeks, and another interesting talent at the position was at the Friday Night Lights camp last week.

His name is Logan Compton, and he’s a 6-foot-4, 217-pound prospect who has played at two different schools in the last two seasons (Cypress Ranch in Texas as a sophomore and the IMG Academy in Florida as a junior). He’s heading to his third school in three years this fall when he enrolls at Tomball (Texas) with the hope of playing both sides of the ball at tight end and defensive end. Despite all the moving around, Compton has 12 different scholarship offers, including Baylor and Maryland.

He popped onto the Ohio State radar during a satellite camp at the University of Houston, where Ohio State co-offensive coordinator Kevin Wilson took notice of him. Wilson asked him to come to Columbus to camp for the Buckeyes, and he arranged the trip to Columbus. Overall, things went well and Compton says that the feedback he received from Ohio State, specifically Wilson, was positive.

“They said I did a really good job,” Compton told Lettermen Row. “I didn’t spend too much time with them after camp, but I went back up there the next day and visited. Coach Wilson said he’s going to show my film to Coach Meyer to see what he thinks about me. He also said coming to camp helped me out a lot. I ran a 4.62 in the 40-yard dash there.”

Ohio State broached the topic of a possible scholarship offer, but there’s no timeline for a resolution on that matter. It’s a wait-and-see game.

“They did talk about [an offer],” Compton said. “Coach Wilson and I are going to keep in contact. He didn’t mention any of the other tight ends they’ve offered. When my dad and I sat with Coach Wilson, he said something about they needed to see what happens with three guys. Coach Wilson was mentioning my weight and he was telling me and my dad that in order to block some of the defensive ends in the Big Ten, he feels the tight ends need to weigh 240-plus.

“Wilson said that he knows my frame can add the weight as well. I had a stomach bug earlier in the week and probably would have come in at 220-plus if I hadn’t. I was weighing 222 pounds the week before I came to camp at Ohio State.”

Compton’s physical talents seem pretty apparent. He’s got the size, speed and skills to be a big-time tight end. The school carousel hasn’t helped him put together consistently good film, and as a tight end, that’s hard to do even in the most stable situations.

“I’m just hoping that Coach Meyer gets a chance to see my film from camp,” he said. “Coach Wilson said that Coach Meyer really likes the receivers, and I proved I can catch the ball at camp. That’s why I think that he said that I really helped myself by coming to camp. He was able to see my skill set and see that I’m a competitive player.”

There’s nothing more the Buckeyes like than a competitor.

Ohio State has made two different St. Louis wide receivers a priority in its 2019 recruiting efforts by going after Marcus Washington and Jameson Williams. And if Parkway North wideout CJ Boone has his way, it’ll be three before too long.

The 6-foot-3, 175-pound Boone told Lettermen Row he had a big night on the indoor playing field at the Woody Hayes Athletic Center at Ohio State’s Friday Night Lights.

“It went good,” Boone said. “I shredded the camp. Brian Maurer was my quarterback the whole time and we really showed out together. It was a good time.”

Boone arrived in Columbus in the evening on Friday and had to turn around and get back on the road bright and early on Saturday.

What Boone did get was some encouraging words from Ohio State wide receivers coach Zach Smith, who let him know that he was impressive during camp.

“He said I killed the camp,” Boone said. “And that I did my part, and now it’s time for him to do his. He said Ohio State is about to start recruiting the hell out of me.”