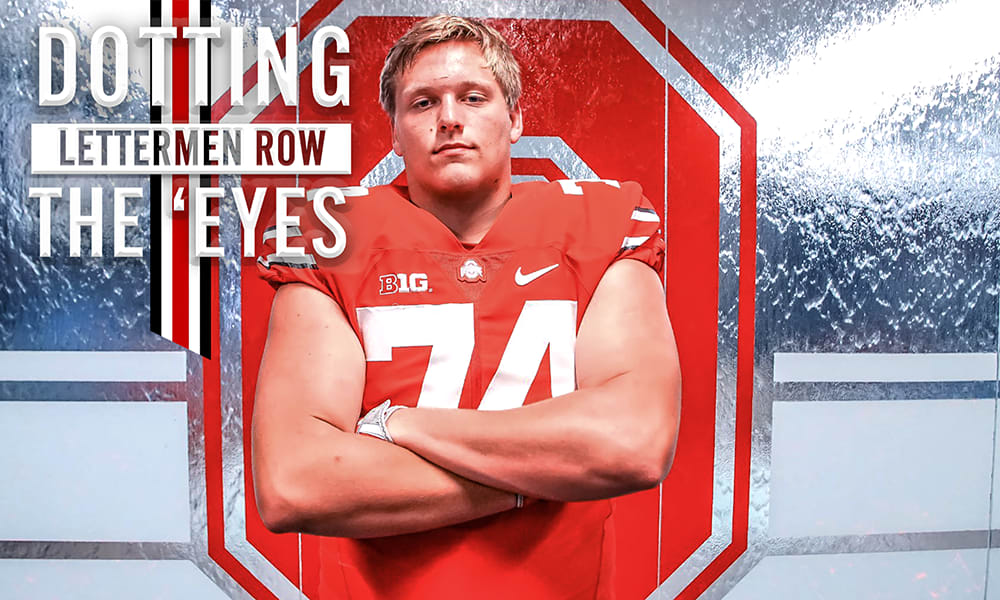 Stay in touch or be left out because Ohio State recruiting is a 24-hour, seven-day-per-week obsession. What’s the latest news as the Buckeyes build for the future? Get that and more Sunday through Thursday on Lettermen Row. Today we’re talking about the return of one of the top 2020 targets to Ohio State, the Buckeyes offering a top-ranked 2021 tailback and perhaps another graduate-transfer to know along the offensive line.

“When you’re visiting all these other colleges, all the coaches are kind of — the same,” Corcoran said. “Urban Meyer has national championships under his belt. That’s different. He knows other people who are going to help get careers kick-started, and that really helps how things are viewed from a ‘What if I don’t make into the NFL?’ standpoint. That was different than anywhere I’ve been. That’s a big deal.”

Well, it’s kind of a big deal that Meyer isn’t coaching at Ohio State anymore, obviously. Ryan Day has taken over, and like Meyer, he has made Corcoran a top priority for the Buckeyes despite not receiving a second visit from the 6-foot-6, 280-pound lineman from Lawrence (Kan.) Free State. That changes next month.

“I’ll be out to Ohio State for their spring game,” Corcoran told Lettermen Row following his weekend visit at Oklahoma. “We’ll be there in the early afternoon on Friday.”

Corcoran is one of the top remaining offensive line targets, and in recent months, his recruitment has been dominated by the Sooners and Nebraska. But the country’s eighth-ranked offensive tackle isn’t ruling out Ohio State as a potential landing spot. It’s his proximity to the other schools which has helped create the notion that he’s more interested in other places.

“Maybe because it’s hard for us to get up [to Ohio State],” he said. “We text every other day, and Ryan Day is the one texting me the most.”

‘It’s an unofficial visit,” he said. “It’s kind of just to show my dad the place and I’d like to talk to some more current players, too.”

Tony Alford extended his second offer in the Class of 2021 on Monday.

That is William Amos Hough (Cornelius, N.C.) sophomore Evan Pryor, who joins West Bloomfield (Mich.) star Donovan Edwards with an offer from the Buckeyes in his class. Already he has offers from Penn State, Georgia, Alabama and others, but it’s the Nittany Lions who have an early 247Sports.com crystal ball prediction, though Pryor explained to Lettermen Row that’s because he’s got a family member at Penn State.

“My sister does go [to Penn State],” Pryor told Lettermen Row. “That’s why you may see me up there a lot. I’ve got no family ties anywhere else, but my people are from up north. My dad is from Indiana.”

It was Alford who reached out to the 5-foot-11, 175-pound Pryor and extended the offer to him. And there’s no doubt that landing an Ohio State offer is a big one.

“It’s a very prestigious offer,” Pryor, ranked by 247Sports as the country’s No. 3 tailback in 2021, said. “Their history of big names in the NFL and their college football accomplishments as well.

Pryor isn’t your Average Joe, and now he knows he can go to Ohio State. The question is whether he will or won’t. The conversation with Alford was the first time they’ve spoken, and it was focused on getting him up to campus to see what the Buckeyes are all about.

“Coach Alford is a great guy. He asked about my life in general before he asked a football question,” Pryor said. “He said they offered because they like my character and my film and said there weren’t many guys in my class that can do what I do, like catching the ball out the backfield and being able to make defenders miss and things such as that.

“[Alford] was telling me how he wants me up ‘really soon,’ and we plan to do so. It would be sometime this spring.”

As for that crystal ball to Penn State? Is he a sure bet to follow his sister’s footsteps?

“My recruitment is totally open,” he said.

After the announcement that Rutgers graduate transfer Jonah Jackson is coming to Ohio State on Monday, the assumption is that Day would be done making additions to the offensive line. That may end up being true, but sources close to the program have indicated that there still remains a chance for another grad-transfer to join the fray — but it’s not Virginia’s R.J. Proctor, who was expected to visit this weekend and will not make the trip.

Parker Braun, who is leaving Georgia Tech, has two years left to play one year. That could make him a more appealing option for the Buckeyes as they look to completely restock what had become a depleted offensive line room. After earning All-ACC honors the last two seasons, Braun decided to leave the Yellow Jackets program, and Ohio State is one of the schools he continues to look at, according to the Atlanta Journal-Constitution.

“He has taken an unofficial visit to Florida [with his younger brother Joshua, a rising high school senior from Live Oak, Fla.] and has an official visit planned for Texas for March 1,” Ken Sugiura wrote. “Braun said, ‘We’re still trying to work out something with Ohio State.'”

Ohio State is at least interested in still trying to work out something with Braun as well. That’s just something to keep an eye on moving forward.