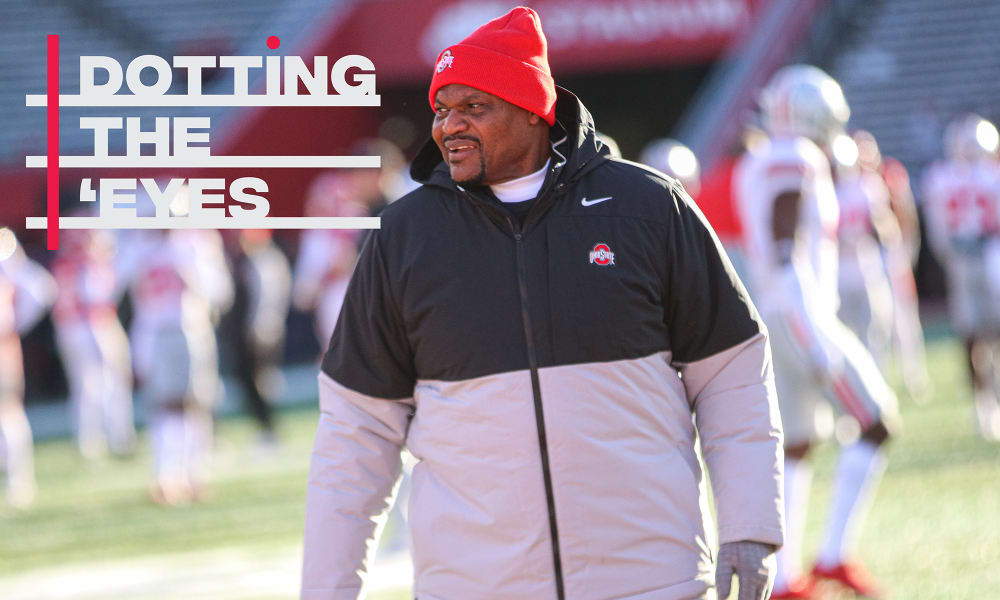 Larry Johnson will see a number of his top targets in the Class of 2021 when Ohio State hosts Penn State. (Birm/Lettermen Row)

Stay in touch or be left out because Ohio State recruiting is a 24-hour, seven-day-per-week obsession. What’s the latest news as the Buckeyes build for the future? Get that and more Sunday through Thursday on Lettermen Row. Tuesday’s notebook looks ahead to what could be a pivotal weekend when it comes to Ohio State and its defensive line recruiting efforts in the Class of 2021.

After a few back and forth days trying to decide if there was a flight that would allow for Tunmise Adeleye and his family to get to Ohio State on time for Saturday’s game against Penn State, the 5-star defensive lineman from Texas has his final answer on whether or not he’ll be trekking to Columbus this weekend.

“No, sir, I won’t be able to make it — I’ll have to find a different day to visit,” the 6-foot-3, 270-pound Adeleye told Lettermen Row on Tuesday. “I don’t know who controls what times college games start, but whoever set this one up needs to be fired.”

Of course, that was tongue-in-cheek. Adeleye doesn’t want anyone fired, but certainly the country’s No. 25-ranked junior prospect is disappointed he will miss out on seeing a game of serious consequence in Columbus. His decision date is set, but he suggested not making it to Ohio State right now won’t affect his perception of the program as Jan. 8 nears.

“If I couldn’t make it to that game, things would still be all right,” Adeleye said. “It wouldn’t have a bad effect on my decision-making process.”

The Buckeyes could very well host Adeleye sometime in December for a bowl practice or something of that nature. So while he’s missing out on the sure-to-be crazy atmosphere in Columbus this weekend, there’s plenty of time to continue building a relationship between the two sides.

The country’s No. 9-ranked strongside defensive end, Armitage will arrive at Ohio State on Friday night.

“I leave Friday for Columbus,” Armitage told Lettermen Row. “Then I’ll head back home to Canada on Saturday night.”

Like many players coming into Central Ohio this weekend, Armitage is aware that his trip may not include a lot of time with the Ohio State coaching staff as it prepares for Penn State. He is perfectly fine with that, even though he hopes to steal a little time with staff — especially Larry Johnson.

“I just finally want to watch an Ohio State football game at home,” he said. “It’s going to be amazing. I can’t wait to see them dominate.

“I hope I can get some time with the staff because that would be great. I have been talking to [Johnson] almost every day.”

Armitage, 6-foot-4 and 242-pounds, will see the Buckeyes in consecutive weeks. He’ll also be in Ann Arbor for the Ohio State and Michigan game. The Wolverines are considered one of the favorites in his recruitment, and right now he holds more than 25 scholarship offers.

Another talented defensive lineman from the Northeast will be at Ohio State this weekend checking out the program in person for the first time.

“I’m visiting Ohio State this weekend,” Rhode Island 3-star prospect Jason Onye told Lettermen Row. “It’s my first time. I’m very excited. I talk to their coaches a lot throughout the week. They have told me they like the way I play and the way I hustle. They want me to come out there and see what they have going on.”

Onye is a raw, 6-foot-5, 245-pound defensive end who took a few years away from football to play basketball before coming back to the gridiron as a high school sophomore. The Warwick resident doesn’t know a lot about the Buckeyes or Johnson yet, mainly because he was playing basketball and Rhode Island isn’t an area known for developing football talent. He’s gotten to know Johnson a bit in recent weeks though and likes the venerable coach’s demeanor.

“I don’t know that much about him,” Onye, who plays at Bishop Hendricken High School, said. “But I talk to Coach Johnson. I like him and he’s obviously a very good coach who I can see developing me into a great defensive end.”

Ohio State has not offered yet, but 13 schools have — including Penn State, Michigan, Virginia Tech and West Virginia. Onye is hopeful one could come from the Buckeyes.

“They haven’t mentioned anything about an offer,” he said. “But hopefully after the visit, if all goes well I’ll have it.”

There will be upwards of 100 recruits in attendance at Ohio State this weekend, and the defensive line — especially in the Class of 2021 — will be very well represented even without Tunmise Adeleye.

Here’s who Lettermen Row knows will be in attendance from that class, getting a chance to see Ohio State and its defensive line in a big-time matchup against the Nittany Lions.

Expect more names than that to actually pop up in Columbus, those are just the ones that are known about and we’ll likely add to it as Saturday gets closer.

Remember, it was the home game against Penn State in 2017 and the game against Michigan in 2018 that helped turn the tide in the recruitment of Tyreke Smith and Zach Harrison. The chance to see Johnson work in person shed new light on what the opportunity to work with him could do for both of those current Buckeyes. There’s no doubt that the players listed above, and whomever else shows up, could be subject to a recruiting revelation of their own.

Can Cade Stover help ease Ohio State defensive line search in 2020?
Should Buckeyes use one of final 2020 spots on offensive line?
Advertisement