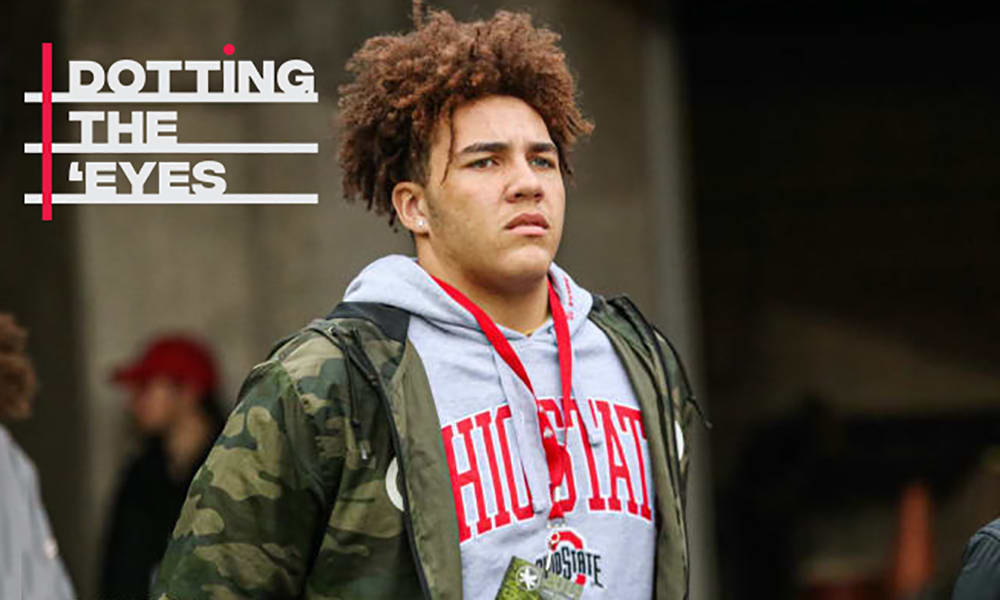 Stay in touch or be left out because Ohio State recruiting is a 24-hour, seven-day-per-week obsession. What’s the latest news as the Buckeyes build for the future? Get that and more Sunday through Thursday on Lettermen Row. Today’s update has more updates from the big Ohio State recruiting weekend against Penn State.

Tristan Leigh has Ohio State ‘up there’ in his recruitment

No position group that visited the Buckeyes last weekend was deeper and more talented than the offensive line — especially in the Class of 2021. One of the top-ranked names in attendance raved about his first trip to Columbus.

“It was great,” Tristan Leigh told Lettermen Row. “I really didn’t know what to expect, but the game atmosphere was really nice. It was a great trip just because of talking with [offensive line coach Greg] Studrawa a lot and listening to his views. Plus, there was amazing hospitality from them.”

Leigh, the country’s No. 22-ranked offensive tackle, made the trip with his mother and his brother. The 6-foot-5, 275-pound tackle said his mother was pleasantly surprised at the focus being placed on academics by the Buckeyes.

“My mom loved it,” he said. “And she loved their focus on academics. They talked about how people are normally surprised by that, but I sort of got the vibe that they handle both football and academics very well.”

From here, Leigh will keep in touch and hopes to return to Ohio State in the spring.

“We were very impressed with how much they care about their players’ futures,” Leigh added. “Whether that is developing you for the NFL or for giving you opportunities outside of football. I’m going to stay in touch with Coach Stud and try to visit again, probably in the spring.

“Ohio State is definitely up there for me. I can’t wait to be back.”

Ohio State has been aggressively recruiting Tennessee for the last few years, and last weekend the Buckeyes hosted the No. 5-ranked junior in the Volunteer State for the first time.

“It went really well,” Nashville’s Andre Turrentine, a 4-star defensive back in the Class of 2021, told Lettermen Row. “The game was great and Ohio State was so dominant.”

Turrentine, who checks in at 6-foot-tall and 175-pounds, said the atmosphere and experience compared well when stacked up against other places he’s been, like LSU. He did, though, give the noise edge to the Tigers. He was in Baton Rouge for LSU’s matchup against Florida.

“I think up north it’s just pure football,” he said. “I think the atmosphere was amazing, but compared to the big SEC games, they just feel louder with the same number of people. It’s weird.

“But Ohio State definitely has players that are among the best athletes in the country.”

A relatively unknown name in Ohio State recruiting to this point is Clintwood (Va.) Ridgeview athlete Trenton Adkins, the country’s No. 25-ranked athlete and the No. 7-ranked player in Virginia’s junior class. The 6-foot-1, 195-pound Adkins made his first visit to Ohio State last weekend and was impressed by what the program had to show him.

“It was great,” Adkins said. “Definitely more than I expected. The atmosphere was better than I thought, and the coaches were straight up with me. It just felt like a family.

“They use their running backs in all kinds of ways: Running the ball, catching the ball, blocking. They stressed how well you play without the ball in your hands which is another thing I like about them.”

Adkins has been in contact with Buckeyes running backs coach Tony Alford for a while now as the two continue to build their relationship.

“I’ve been talking to them for a while, and we ended up getting the visit for the weekend set up,” he said. “I was there on Saturday for the game and then stayed overnight. On Sunday I was there from like 9 a.m. to 12:30 p.m.”

As a junior, Ohio State commitment Cam Martinez dominated throughout the season and earned a major honor when he was named the MLive.com State Player of the Year in Michigan.

On Tuesday, Martinez earned that award for the second-straight season. Martinez has led the Muskegon Big Red to an undefeated record and an appearance in the Division 3 state championship game on Saturday against River Rouge.

Playing quarterback for Muskegon, Martinez has scored 35 touchdowns and run for 2,016 yards on the ground while throwing for almost 1,300 yards and another 11 touchdowns this season. He earned 54 of the state’s 67 total votes for the award.

None of that matters right now to Martinez, who is focused only on winning a state title for Muskegon.

“It really hasn’t hit me yet,” Martinez told Lettermen Row. “I’m focused on one thing, and that’s getting a ring.”

Martinez won a state championship at Muskegon Central Catholic — a Division 8 program — in his freshman season. The Big Red lost in the state title game a year ago to Detroit powerhouse Martin Luther King.