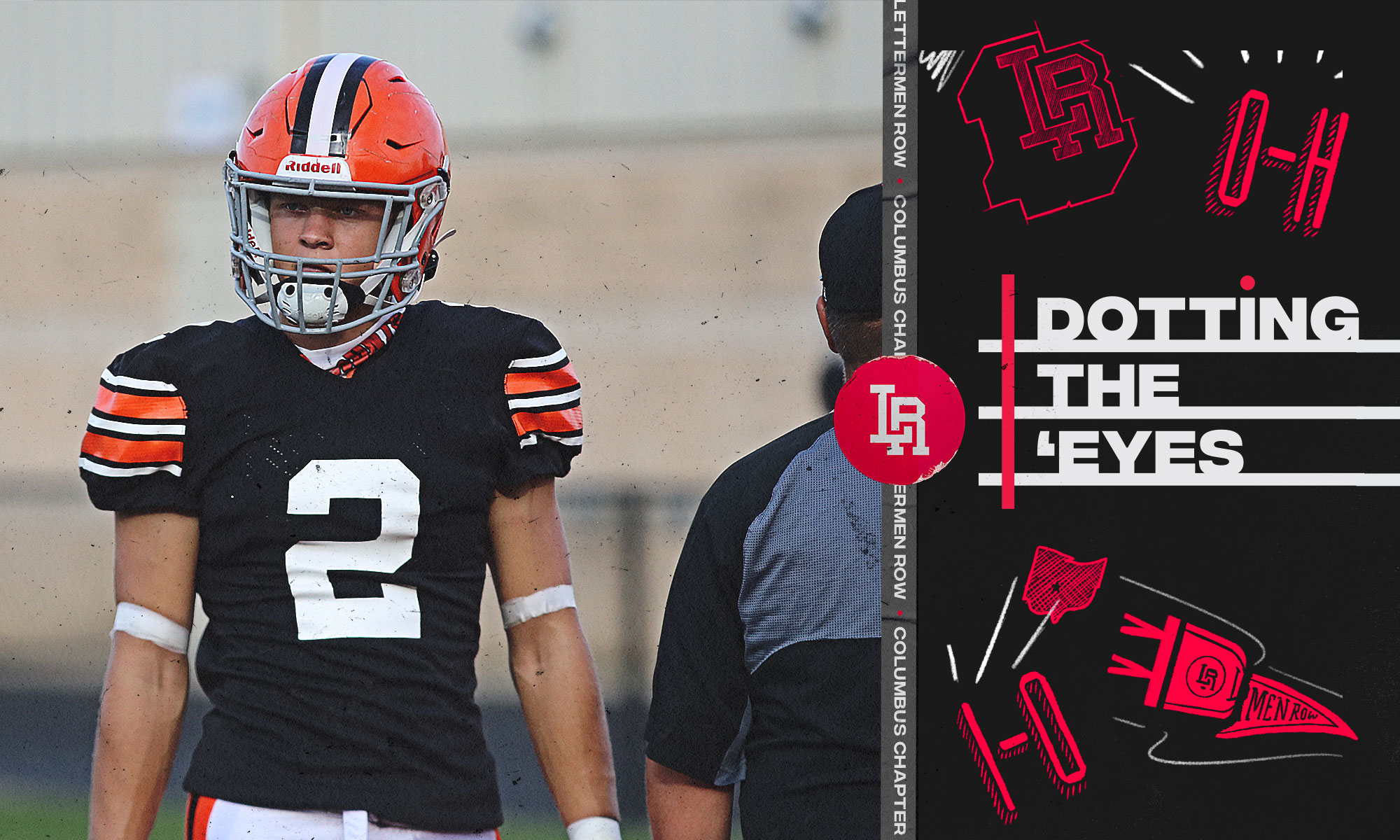 Stay in touch or be left out because Ohio State recruiting is a 24-hour, seven-day-per-week obsession. What’s the latest news as the Buckeyes build for the future? Get that and more Sunday through Thursday on Lettermen Row. Today we talk about about the latest Ohio State offer in the 2021 recruiting class, update a recent offer in 2022 and chat up 2023 standout Trevor Carter.

It may be time to officially put to bed Ohio State’s hopes in the recruitment of 5-star offensive lineman Tristan Leigh.

The Virginia standout has made recent visits to Norman and Baton Rouge to see the campuses of Oklahoma and LSU. And he is returning to LSU again this weekend for some reason — but hasn’t made the short trip to Columbus, and there aren’t any plans to do so. The Buckeyes short-lived resurgence in Leigh’s recruitment was amplified on Tuesday when Greg Studrawa offered a scholarship offer to Zen Michalski, a 6-foot-6, 290-pound tackle from Floyds Knobs (Ind.) Central High School.

For the geographically challenged, Floyds Knobs is actually a suburb of Louisville (Ky.), and Michalski has been committed to the Cardinals since April. He told Lettermen Row that the Ohio State offer is something truly special to him, however.

“I’m still trying to process everything that is happening,” Michalski said on Tuesday after landing the offer. “But I can’t tell you how excited I am about this.”

Michalski has never been to Ohio State, and the relationship with the program is just about a month old. But he’s also never actually been on campus as a recruit to Louisville, either. And because of that, it’s hard to suggest that the Cardinals have any real built-in advantage other than the fact that he’s committed to their program. Since neither place can actually host him for a visit right now, it’s all about getting to know the No. 4-ranked prospect in Indiana. The Buckeyes have done a good job of that in recent weeks.

“They have built a very strong relationship with me,” Michalski said. “Coach [Greg] Studrawa mostly, but a lot of [Ohio State assistant] Kennedy Cook and Ryan Day, too. They’re all amazing guys, and I have loved talking to them.”

To this point, there’s been no virtual visit with the Buckeyes. But that is something Michalski and his family are hoping to lock in sometime soon.

Last Friday night, Lettermen Row traveled to Ironton to watch 2021 Buckeyes commitment Reid Carrico lead the Tigers to a blowout win over Gallia Academy, one of their biggest rivals.

Football is a big deal in Ironton. And the next big thing there after Carrico is 2023 prospect Trevor Carter, who is learning from the future Ohio State linebacker.

“It’s so good for me to have Reid here, helping me, teaching me the ropes,” Carter told Lettermen Row after the game. “From what we do on game days, to how to handle social media, to how to approach coaches in recruiting. He’s the best leader we could ask for, and it’s making me a better player and leader for the future.”

The Buckeyes have had had their eyes on the safety/running back, but they haven’t offered Carter yet. There’s a truly special class of 2023 developing in Ohio, though, and Carter has begun growing very close to a couple of in-state prospects who could be future teammates.

“I talk to Luke Montgomery all the time,” Carter said of the Findlay 2023 lineman. “I’ve also been talking to Brenan Vernon a lot, but I haven’t talked much to Sonny Styles yet. I need to start doing that. It’s just good to get everyone talking now and getting to know each other. We’re all going through some similar things, and I know I’m blessed to be in this position, so having people to talk to about it is really helpful.”

The Buckeyes have added another 2022 offer this week when they pulled the trigger on a scholarship for Iowa junior star Xavier Nwankpa.

Nwankpa is the top-ranked prospect in Iowa’s 2022 class according to 247Sports.com and the Buckeyes offer was his fifteenth — but he’s since added Penn State to his list. As for most kids around the country, an offer from Ohio State has a different meaning.

“Matt Barnes is who offered,” Nwankpa told Lettermen Row. “We had texted a little bit after Sept 1. We talked on the phone a few times because he wanted to start building the relationship before he had offered. Getting an offer from Ohio State this early, or at all, is just exciting. Honestly, like looking back, I never thought I’d be in this position.

“I’m just extremely grateful and excited. Ohio State is a top contender year in and year out and produces some of the best defensive backs in college football.”

The 6-foot-2, 175-pound athlete has family ties to Iowa State — his father ran track for the Cyclones — but the Southeast Polk (Altooona) is intending to get to Columbus as soon as possible to check out the Buckeyes in person.

“I haven’t been there yet,” he said. “But I am hoping to do that as soon as things open up.”

Ohio State: Buckeyes turn attention to new tackle prospects, new game of 'In or Out'
Watch this video on YouTube.