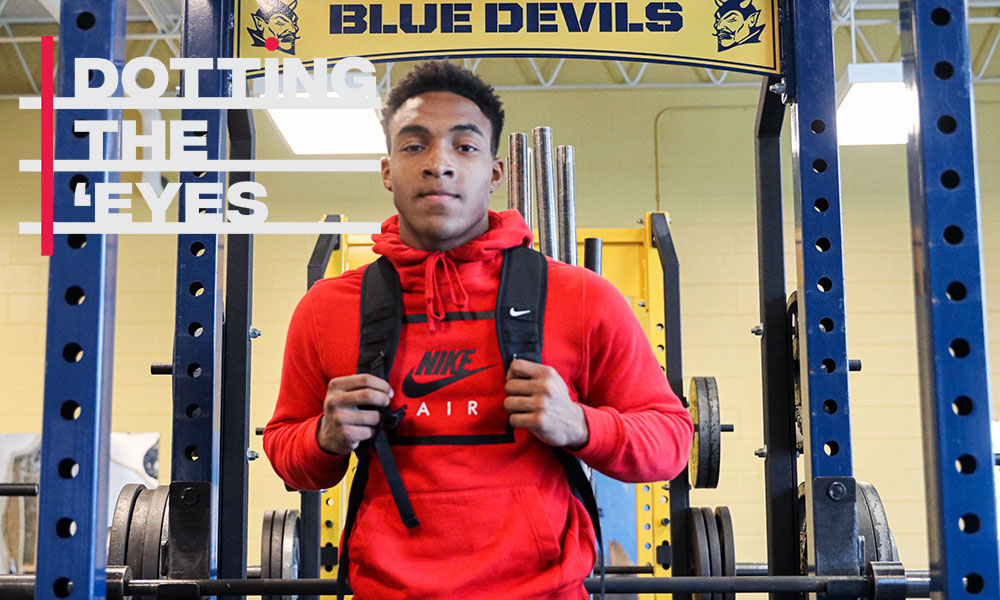 TreVeyon Henderson is the country's top-ranked running back. (Birm/Lettermen Row)

Stay in touch or be left out because Ohio State recruiting is a 24-hour, seven-day-per-week obsession. What’s the latest news as the Buckeyes build for the future? Get that and more Sunday through Thursday on Lettermen Row. Tuesday, we break down the latest from a Lettermen Row road trip and catch up with a local punter hoping to follow his family’s legacy into a Buckeyes future.

With Ohio State on spring break this week, Lettermen Row decided to take to the road and get to know a few of the top Buckeyes prospects better. The first stop on the tour was Hopewell (Va.) High School, the home of 5-star running back TreVeyon Henderson, who recently moved up the national recruiting rankings and is now the country’s top-ranked tailback according to the folks 247Sports.com — though he remains the No. 2-ranked running back in the 247Sports.com composite rankings.

There’s a full interview with Henderson coming soon at Lettermen Row with a new episode of Birminology. But I wanted to make sure that the key points from Tuesday’s visit made their way out with a little preview here.

First and most important: There’s absolutely no sense from Henderson or coach Ricky Irby that any school has moved into the Team to Beat category yet. But there are a handful of teams in play from around the country, including Ohio State, Oklahoma, North Carolina, Michigan and Georgia. To a somewhat lesser degree right now, Clemson remains in the picture.

Irby did say something that I would usually dismiss as coach-speak, but in this case I actually believed him after getting to know Henderson a bit in person.

“I know it sounds crazy,” Irby said in the Blue Devils weight room. “But if Florida Atlantic were the school he felt the most comfortable with, he’d go to FAU. He doesn’t care about the brands or the names.”

What Henderson — who is listed at 5-foot-11, 195-pounds on his 247Sports.com profile but is at least 6-foot-1 — does care about are his relationships. His mood changed decidedly when he began talking about his bond with Tony Alford, something that has been built over the last handful of months. The Buckeyes have been clear with Henderson on how they want to utilize him and have even shared that the expectation is they’ll take two running backs in the Class of 2021. But that is something they wouldn’t necessarily have to do that if he was interested in committing anytime soon.

That said, he’s definitely not committing anytime soon. The Buckeyes are going to get a visit in April, and they’ll get an official visit after that as well. Michigan and Oklahoma are also sure to get officials. North Carolina is just two hours away from Hopewell, and the Tar Heels will see Henderson next weekend. They’re pushing hard as well.

I was sort of taken back by how big Henderson was, primarily because the profile shows 5-foot-11. Physically, there were a lot of similarities to Ezekiel Elliott. Elliott was the player Henderson grew up watching and the initial spark for his interest in the Buckeyes, earning them the “Dream School” label.

Henderson isn’t entirely dismissive of the idea of playing defense, either, so I wouldn’t call his Clemson interest dead at this point. But the plans for him initially included defense with the Tigers. And, sure, they’re telling him differently now, but it sure felt like he was uncertain about their actual plans. He’d prefer to play running back, and there’s no reason any school should seriously recruit him anywhere else.

Look for the interview on Lettermen Row on Wednesday.

Freshman quarterback could be one to watch

Though players like TreVeyon Henderson are pretty rare, there are actually two young prospects at Hopewell who could have very bright futures in the next few years. That includes eighth-grade running back/linebacker Kesean Henderson — yes, he’s TreVeyon’s brother — who Irby said could have a higher ceiling than his highly-touted big brother.

The other is quarterback Mason Cumbie, a freshman who would have played varsity football this past season. But since the Blue Devils were 15-0 and winning a state title, there was no need for rushing him up the ladder.

Cumbie has only been playing quarterback for two years, but his teammates call him “Mahomes” because of his arm strength and innovative style on the field. He’s already close to 6-foot-3 and the football explodes out of his hands, even if his delivery needs some refinement, which is expected at his age and because of his relative inexperience.

The starting centerfielder for his varsity baseball team, Cumbie is a special athlete who recognizes that right now, he’s got one major thing holding him back from being a potential superstar.

“My No. 1 weakness is my attitude,” Cumbie has told Lettermen Row. “Because if I have a bad attitude and the team sees it then the team will get down when I’m down.”

It’s rare for a young player to recognize that and a good sign for Cumbie’s future. Keep an eye on him moving forward.

The Buckeyes are likely going to need a punter in the Class of 2021, and one of Ohio’s best is right down the street from campus. His name is Garrett Junk, and he plays at Upper Arlington High School where he earned First-Team All-OCC (Ohio Capital Conference) and Honorable Mention All-District as a junior. He was one of the “Punt Champions” in December at the Chris Sailer Kicking Camp Tour and has been working hard with former Buckeyes kicker Drew Basil to earn a chance to play for the program. The connection to Basil has helped him get into contact with Ohio State, and a visit is upcoming.

“I have been in contact with [special teams] Coach [Matt] Barnes via text,” Junk told Lettermen Row. “Drew Basil reached out to [Ohio State Director of Player Personnel] Mark Pantoni about me, and he sent that information over to Coach Barnes. Coach Barnes contacted my school’s athletic director and then Basil had a phone call with Coach Barnes. He told me they will be taking a 2021 punter for sure, and that he’s heard great things about me and is looking forward to having me at their specialist camp coming up on June 6.”

Junk also expects to make a spring visit to Ohio State to catch a practice. His father is originally from Columbus, and though the 6-foot-3, 180-pound Junk was born in New Jersey, he and his family are lifelong Ohio State fans. His mother is more than just a fan, she’s an alumnus who is three-time Buckeyes national champion.

“My mom was a three-time national champion as a synchronized swimmer for the Buckeyes,” he said. “It’s a big motivation for me, pursuing Ohio State to follow her legacy.”