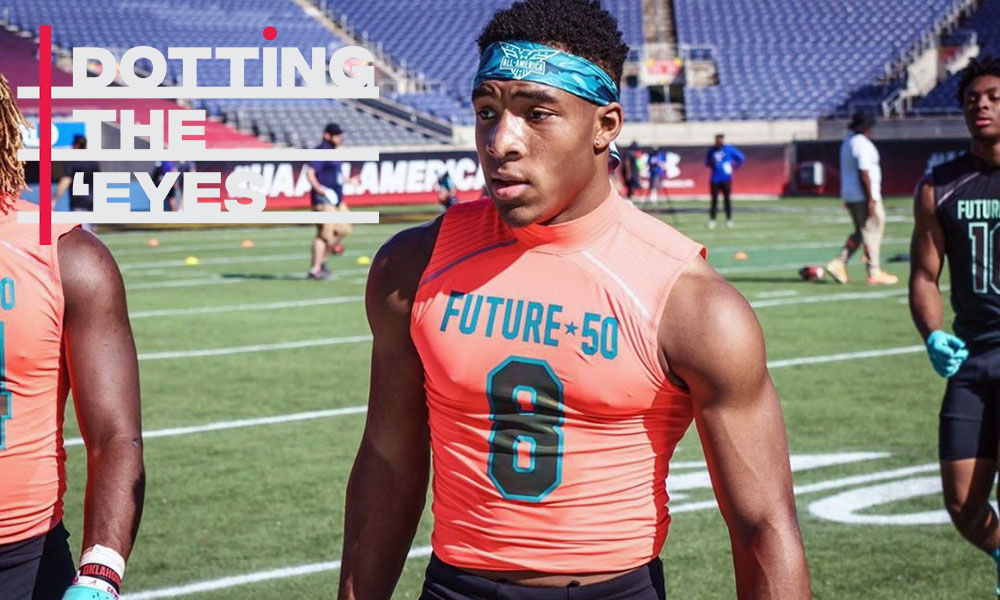 Stay in touch or be left out because Ohio State recruiting is a 24-hour, seven-day-per-week obsession. What’s the latest news as the Buckeyes build for the future? Get that and more Sunday through Thursday on Lettermen Row. Thursday’s notebook talks about the running back recruiting for Ohio State and introduces a 2022 receiver prospect that’s turning some heads in Columbus.

Sometimes when covering recruiting, there is a tendency to get caught up in the players that use social media and other outlets for public relations purposes. Those kids are, of course, a bit easier to track down, and their transparency makes reading the tea leaves in their recruitment a bit less confusing.

So, in evaluating the running back situation in 2020 and 2021, the guys who tend to get the most attention are those who make themselves the most visible. That means occasionally guys like TreVeyon Henderson get lost in the shuffle.

After being bumped into composite 5-star status on Wednesday, it’s going to be harder than ever to overlook the 5-foot-11, 200-pounder from Virginia — and the mutual interest between him and the Buckeyes. His coach, Ricky Irby, indicated the Ohio State staff has been all over his standout running back who scored 53 touchdowns as a junior.

“Ohio State has been on him hard for a while,” Irby told Lettermen Row.

When Irby, who led Hopewell to a 15-0 record last season, points to Ohio State, he means the staff in general. It started with Al Washington, who recruits Virginia for the Buckeyes. It has since shifted into a team effort that now includes Tony Alford and Ryan Day. The country’s second-ranked running back said he and the Ohio State coach have developed a tight bond.

“Ryan Day and I have a good relationship,” Henderson said Wednesday. “I like him a lot.”

The Buckeyes like Henderson a lot and have made that clear to him, though that’s something plenty of schools have done.

“[That complete approach] matters somewhat,” Henderson said. “A lot of schools say that I’m a top priority for them, though.”

To continue proving how they value him, Ohio State will have to take full advantage of the trip Henderson is making to Columbus over the weekend of April 10. It will be his first visit with the Buckeyes.

Just because he’s not been talked about much, doesn’t mean Henderson isn’t a real priority target for the Buckeyes. He is, and his name will be used a lot more in connection with Ohio State moving forward.

Throughout the many visits made to Lexington (Ky.) over the last year to see offensive line target Jager Burton, Ohio State coaches have noticed a few other potential stars at Frederick Douglass High School. One of them is 2022 wide receiver Dane Key, who has picked up early offers from Oregon, Kentucky, Louisville and Marshall.

Wide receivers coach Brian Hartline has noticed Key already, and the 6-foot-2, 170-pound sophomore has noticed the Buckeyes as well.

“I like how they let the ball fly,” Key said. “They will let their wide receivers go and get the ball and let them make big plays.”

Key will be in Columbus with Burton next month and will visit Ohio State for the first time. His offensive lineman teammate has been getting him geared up for the big trip.

Ohio State is likely going to take a pair of tight ends in the Class of 2021, and with Sam Hart already committed, there’s no rush to make a move on a second prospect at the position in this cycle.

While the staff in Columbus evaluates remaining options in 2021, they’re likely also taking a look at the top players at the position in 2022. One of those young prospects worth knowing is Donovan Green from Dickinson, Texas. A MaxPreps.com sophomore All-American, Green has recently picked up offers from Notre Dame, Florida, Michigan and Washington — adding those big-time programs to a list that already included Alabama and Georgia.

To this point, there’s been no communication with Ohio State — contact rules make that difficult. But the 6-foot-4, 210-pound tight end is just trying to soak up the attention he is receiving. It’s come as a shock to him.

“It has been very much a surprise,” Green told Lettermen Row. “But I think I’ve shown that I fluid routes and have soft hands when catching the ball. I can also get down and block and there is so much more room for me to grow as a player.”

Green would like to hear from the Buckeyes, and he’s going to be open to any school that presents him the best chance to be developed.

“I am absolutely open to going anywhere for college,” he said. “Location isn’t a problem.”