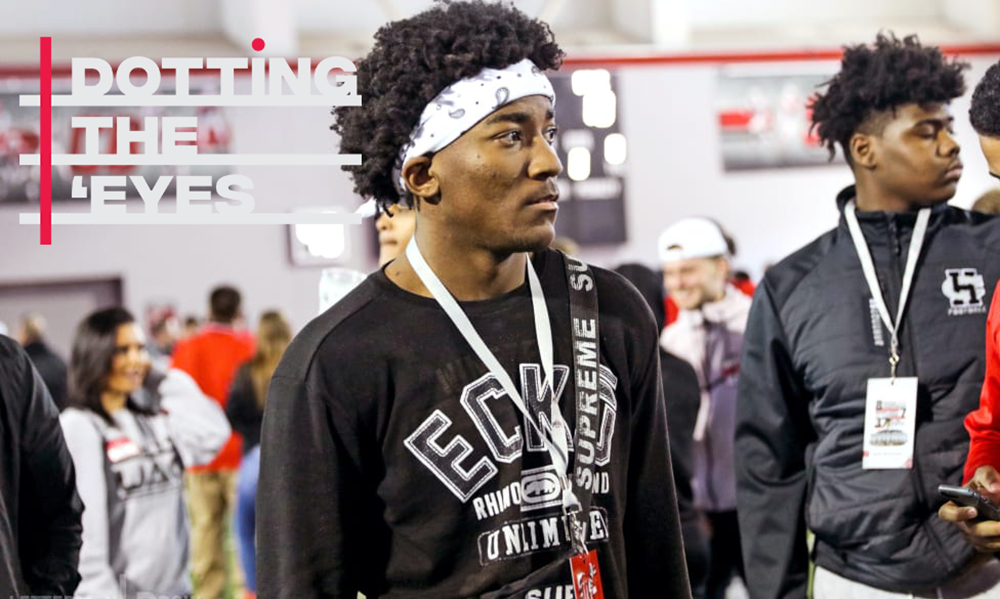 Stay in touch or be left out because Ohio State recruiting is a 24-hour, seven-day-per-week obsession. What’s the latest news as the Buckeyes build for the future? Get that and more Sunday through Thursday on Lettermen Row. Sunday, the notebook catches up with Travion Ford after a topsy-turvy junior season and has thoughts on two top targets who recently reduced their list of contending schools to six.

After missing four games in his junior season because of Missouri’s over-the-top transfer rules, it’s easy to understand why some have seemingly forgotten St. Louis 4-star defensive end Travion Ford.

Ford says his absence from the spotlight was one-half transfer related and one-half related to the focus of him and his teammates.

“My junior year was awesome, even though I missed four games,” Ford told Lettermen Row. “I still was able to lead the team with 10 sacks and I was voted as All-State, All-Conference first team. Our Lutheran North squad won the State Championship for the first time since 1999. We’ve got big things happening at Lutheran North.

“My teammates at Lutheran North were very focused on a State Championship so I didn’t do much with recruiting. A lot of our games were held on Saturdays which made it impossible for me to really attend games. As long as the coaches haven’t forgotten me it’s all good. The film speaks for itself.”

Now, the 6-foot-4, 222-pound Ford is in the middle of basketball season and will turn his focus to recruiting again with the return of spring. On the agenda is a return to Ohio State where he last visited in March of 2019. He’ll be coming to Columbus with his parents on March 6.

“Coach Larry Johnson and Coach Kenny Anunike are great coaches,” Ford said. “We talk on the phone and text and always have good conversation. It’s going to be great to be at the spring practice to get a close up glimpse of how it goes down. The value in making this visit is high. I will have a lot more one-on-one time on this visit. We’re building a great relationship.”

Buckeyes in final list for Jakailin Johnson, Notre Dame is not

On Friday, another St. Louis standout in the Class of 2021 released his final six schools and the Buckeyes made the cut as expected. What was unexpected for some was that Notre Dame did not make the list.

Yes, the recruitment is still open for Johnson and there is plenty of time for the Irish to get back into the mix now that they’ve hired cornerbacks coach Mike Mickens away from Cincinnati but their absence is telling. Johnson plays at DeSmet High School which also produced 2020 4-star receiver Jordan Johnson. Many believed that connection would help Notre Dame eventually land the country’s No. 5-ranked cornerback.

Whether or not it was the lack of a cornerbacks coach or just a feeling from Johnson that Notre Dame wasn’t for him led to them being off of his list is unclear. What is clear, according to DeSmet coach Robert Steeples, is that the Irish picking Mickens over Steeples for that open cornerbacks position had nothing to do with it. The former NFL defensive back told Lettermen Row that there is no love lost between Notre Dame and himself.

“I have even more respect for the Notre Dame program and I see why they’ve been so successful recently,” Steeples said. “They already had an offer out to Brian Kelly’s former player [Mickens], who I’ve heard great things about before I even came to interview. It eventually came down to me and him. I completely respect Kelly’s decision and I’m grateful for the opportunity.

“JK and I have a great bond and he trusts my knowledge of the defensive backs position and my ability to develop cornerbacks, but he’s experienced that firsthand. So, of course, he would be intrigued by playing for me at the next level. You always want to go where you have a great relationship with someone. That being said, no matter where I may go or not go, I want my players to go where it is best for them personally. If that’s with me, fine, if that’s not with me, great. They know that they got me in their life no matter where they end up.”

What does it all mean for Ohio State? Ultimately, that’s unclear. The Buckeyes are in a great position with Jakailin Johnson though and the recent hiring of Kerry Coombs will only increase the odds. Buckeyes fans should expect Johnson in Columbus “at some point in the spring” according to Steeples though the data for that visit hasn’t been finalized.

The needs at running back in the Class of 2021 are obvious and one of the Buckeyes top targets is Charlotte (N.C.) William Amos Hough 4-star tailback Evan Pryor. The 5-foot-10, 190-pound back also narrowed down his top schools list on Friday and again, included Ohio State.

The Buckeyes have been considered a favorite here for a while but the Georgia Bulldogs can’t ever be counted out and North Carolina is enjoying a resurgence on the recruiting trail, especially with in-state prospects, under Mack Brown.

Penn State, where Pryor’s sister attends school, was an early favorite but Ohio State — thanks to the relationship with Tony Alford — has become a consistent threat to land the country’s No. 5-ranked running back. There’s been no indication on a timeline for a decision from Pryor, but if he makes his way to Ohio State in the spring as he’s expected to, his recruitment could move toward a resolution in the immediate months that follow.