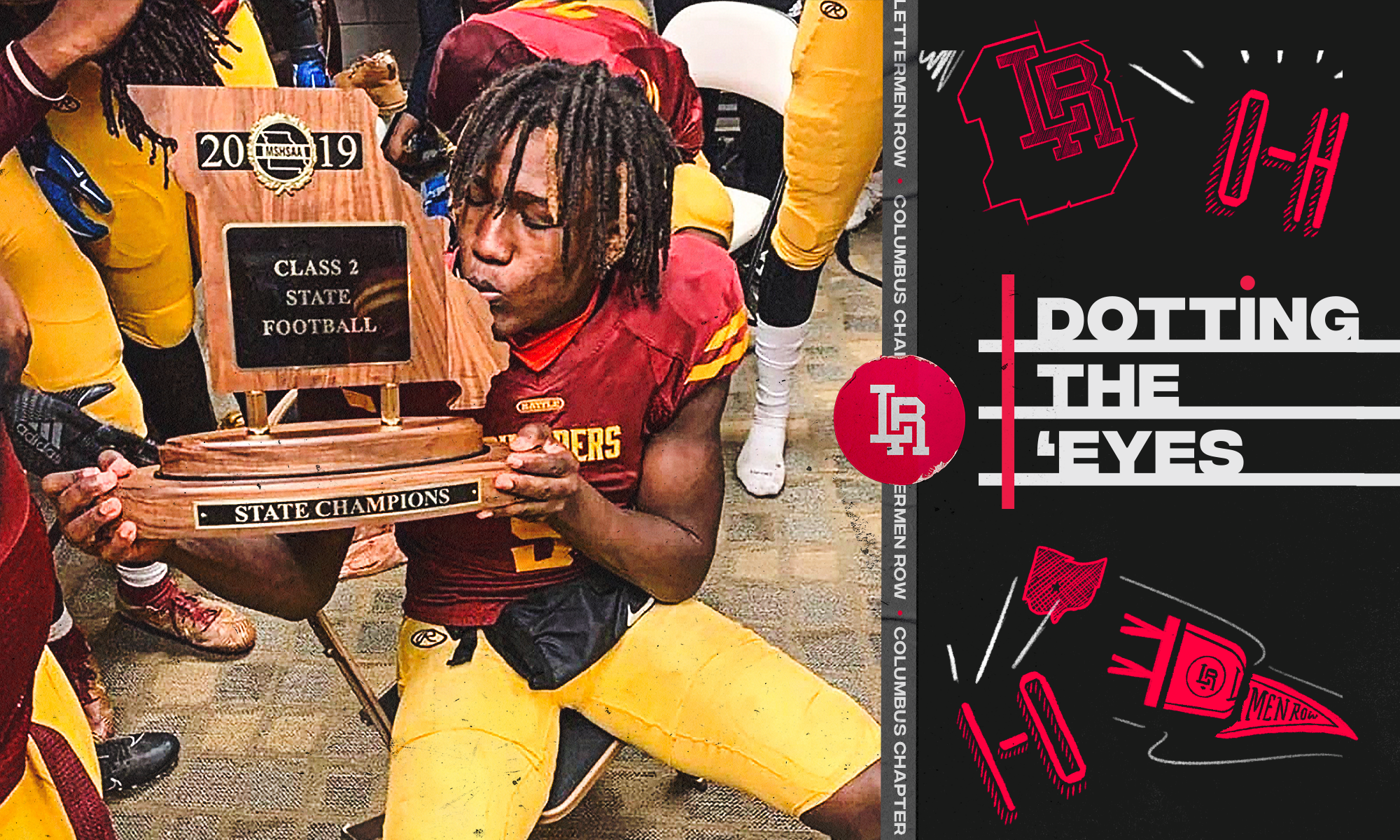 Toriano Pride has all the tools to make him a top target for Ohio State. (Toriano Pride/Twitter)

Stay in touch or be left out because Ohio State recruiting is a 24-hour, seven-day-per-week obsession. What’s the latest news as the Buckeyes build for the future? Get that and more Sunday through Thursday on Lettermen Row. Today’s notebook has stuff about top cornerback prospect Toriano Pride, a young receiver hearing from the Buckeyes and more.

There are a number of outstanding questions around the Buckeyes defensive back recruiting efforts in the Class of 2022, but the fact that St. Louis (Mo.) Lutheran North star Toriano Pride is near the top of the list isn’t one of them.

The nation’s No. 14-ranked cornerback was offered by the Buckeyes last August, and the conversations between the two sides have been consistent since.

“Coach Coombs tells me that I’m a priority for them,” Pride told Lettermen Row. “He’s just telling me that they want me to get up there and visit as soon as the dead period is over so they can actually meet me in person.”

The never-ending dead period is wearing thin on the 5-foot-11, 175-pound athlete.

“It’s frustrating because I’m tired of doing all the Zooms,” he said. “I’d rather just be up there in person to get to see it all with my own two eyes.”

The Buckeyes are trailing Clemson according to the 247Sports.com crystal ball — the Tigers own the only prediction connected to his name right now — but he insists that there’s no hurry to make a decision anytime soon. Initially, when he believed the dead period would end in April, he thought a choice could come this spring.

“I’m just blessed to be in the situation I’m in now to even have offers,” he said. “That’s how I look at it. I’m still looking at all my options.”

Another 2022 prospect who is continuing to look at his options is Rockwall (Texas) Heath 4-star wide receiver Jay Fair. The country’s No. 74-ranked receiver hasn’t yet turned into a national recruiting name, but he’s been in steady contact with both receivers coach Brian Hartline and Ryan Day at Ohio State.

“I’ve been talking to them for about two months,” Fair told Lettermen Row. “I’ve heard they are pretty slow to offer, and that’s OK. I’ve been on Zoom calls with them and talk weekly.”

Outside of the Ohio State coaches, the 5-foot-10, 175-pound Fair is also getting valuable insight into the Buckeyes program from sophomore receiver Jaxon Smith-Njigba, who played against Heath at crosstown rival Rockwall in high school and works out with Fair when he’s back home in Texas.

“[Jaxon and I] talk about once a week and he loves everything about it,” Fair said. “He tells me every day guys compete and all come to work to go to work. He also mentioned the camaraderie of the team, which is something I need and a good thing to have in a championship program such as Ohio State. He said the guys enjoy it and have fun there.”

Fair has 25 offers including Texas A&M, Auburn, Florida, Georgia, Notre Dame, USC and others. So his recruitment has not been in anyway stalled because of the lack of stars or his current ranking. Through his conversations with the Buckeyes, he’s become a fan of both Hartline and Day, and he knows an Ohio State offer, were it to come, would change his recruitment.

“Their personalities are very friendly and they’re both family-oriented guys, which is a good thing of course,” he said. “The program and culture is amazing, and they do a good job of developing guys on and off the field. An offer [from Ohio State] would be a big change in my recruitment. Right now, I’m just trying to be patient with them and build a really good solid relationship with them.”

Ohio State is one of the schools pursuing Philadelphia (Pa.) Imhotep Institute 5-star defensive end Enai White the hardest, and he’s continued to be in regular contact with Larry Johnson regularly. The conversations are varied, sometimes about football and sometimes not, but one topic has been beaten into the turf: The dead period and how it’s stopped the 6-foot-5, 230-pound lineman from making any visits to Columbus.

It’s a trip he knows he wants to make soon.

“I will visit there as soon as the NCAA allows us to,” White said.

A lot of kids are taking it upon themselves to make that happen by going the self-guided tour route, but White will not be doing that. When asked if he and his family would consider that kind of visit, he offered up a simple: “No.”

The good news for Ohio State is that it seems Enai White isn’t interested in doing that with any schools, so whenever things open up for recruits there should be no advantage gained anywhere yet. The bad news is that the No. 2-ranked weak-side defensive end and the Buckeyes are both at the mercy of the NCAA, and the people in charge of making decisions about the recruiting dead period seem less than interested in what’s in the best interest of the young men making college decisions.