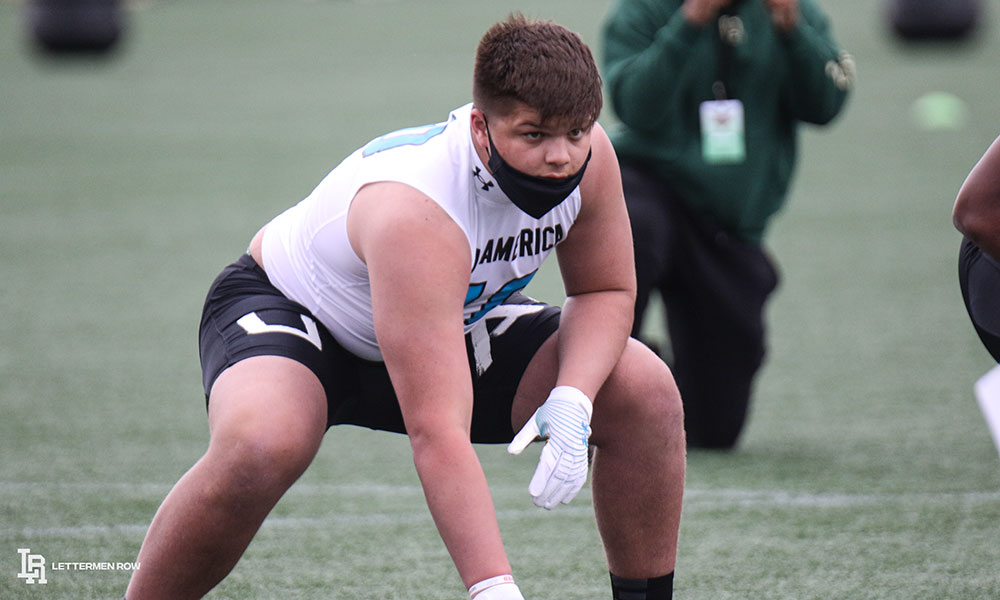 In-state offensive lineman Josh Padilla will be one of the top prospects at the second Ohio State one-day camp. (Birm/Lettermen Row)

The Buckeyes are set to bring in a couple hundred of young football players from around the country — and in some cases the world — and give them a taste of Ohio State football as taught by the Buckeyes coaching staff.

There are always big names on campus for these camps, and it’s not possible to highlight every key storyline. There are some things that Lettermen Row will be watching closely on Tuesday though. Here are a few of the names to know.

One of the early favorites to become the first 2023 Ohio State commit, Huber Heights (Ohio) Wayne offensive lineman Josh Padilla will camp with the Buckeyes just two days after his first visit to Notre Dame. Those are the two programs being most closely linked to the 4-star interior lineman and he, like most kids in the Dayton area, considered Ohio State his “dream school” growing up.

Is it too early to expect a commitment from Padilla? Probably, but stranger things have happened.

Treyaun Webb hits Ohio State, will camp next at Clemson

One of the country’s most dynamic 2023 athletes arrived at Ohio State on Monday night. Treyaun Webb, a 5-star running back from Jacksonville (Fla.) Trinity Christian took to Twitter to show off the good time he’s having. Tuesday will be a bit different with a camp setting and a workout on the books for the 6-foot, 190-pound former Georgia commitment.

The Buckeyes have done very well inside the Crusaders program over the last few years and Webb is the next big thing from the Jacksonville power. This visit, and this camp, gives both he and the Buckeyes a chance to see exactly how well he fits into their program and plans.

Webb is the No. 4-ranked athlete in the country in the Class of 2023. He’ll head off to Clemson following the Buckeyes visit.

There’s a big group of big-time prospects coming into Columbus from overseas with the PPI Recruits group led by Brandon Collier. That group has been to Ohio State a couple of times over the last few years and usually brings some good prospects but this time around will bring two kids with 5-star potential.

Hero Kanu is a name we’ve talked about a little bit and the Santa Margarita Catholic (Rancho Santa Margarita, Calif.) star is a player to pay attention to. He’s launched himself into a national prospect over the last few months and has ramped up his personal research on Larry Johnson since the Buckeyes offer came in April. Kanu will work out with the Buckeyes on Tuesday.

“I was waiting for the day to see coach Larry Johnson since he offered me,” Kanu told Lettermen Row on Monday. “We just did a great job building that relationship. He is a real professional with great results — therefore a great coach. At first I just played the game of football but now I really get involved with [recruiting.]”

Kanu is the No. 12-ranked defensive line prospect in the Class of 2022 and he’ll be joined by intriguing defensive end prospect Aric Burton working out with Larry Johnson. On the offensive side of the ball is 2023 tight end prospect Theodor Melin Öhrström, who walked away from an Alabama camp over the weekend an offer from the Crimson Tide.

College football is a worldwide game.

Hawai’i will also be represented at Ohio State on Tuesday. The country’s top-ranked linebacker, Tausili Akana, arrived in Columbus on Monday night. The 6-foot-4, 225-pound Kahuku (Haw.) High School star has plans to be all over the country this month and saw Texas, Texas A&M, LSU and TCU in the last few days. He’ll also visit Notre Dame and is a player likely to land a Buckeyes offer with a strong camp performance.

Stay with Lettermen Row throughout the week for all the updates that matter from the Ohio State one day camps.