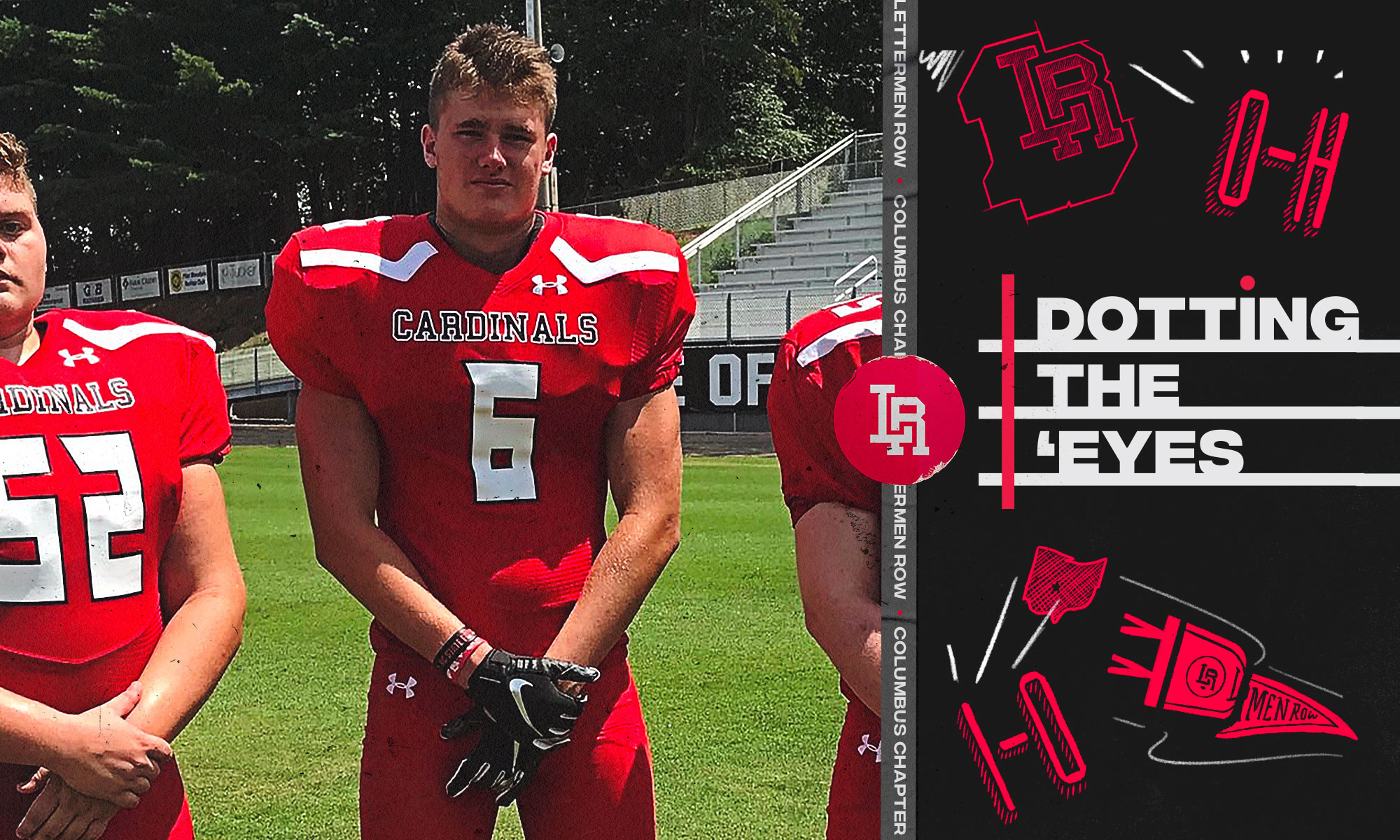 North Carolina athlete Benji Gosnell could be the top target at tight end for Ohio State in 2022. (Benji Gosnell/Twitter)

Stay in touch or be left out because Ohio State recruiting is a 24-hour, seven-day-per-week obsession. What’s the latest news as the Buckeyes build for the future? Get that and more Sunday through Thursday on Lettermen Row. Today, we’re catching up on a handful of Ohio State 2022 tight end targets.

Benji Gosnell hoping to get to Ohio State soon

There’s a long way to go before Ohio State needs to make a decision on the tight end position in the Class of 2022. But North Carolina standout Benji Gosnell has emerged as one of the program’s early favorites. The East Surry (Pilot Mountain) star is the country’s No. 5-ranked tight end, and he’s feeling pretty good about his relationship with Kevin Wilson and Ohio State.

“I’m on the phone with coaches from Ohio State at least two or three times a week,” Gosnell told Lettermen Row. “Me and Coach Wilson have built a great relationship, and their coaching staff is awesome.

“He’s a real, well-rounded, genuine guy. He knows his stuff about tight ends and the offense, and he produces the tight end really well. Ohio State uses the tight end more than anyone in the country, but a lot of the talks me and him have are mainly just talks about everyday life. Talks like regular friends would have.”

While some may scoff at the notion that the Buckeyes use the tight end more than anyone in the country, Gosnell is referencing the number of plays they are on the field for — not necessarily their usage in the passing game. That’s one of the reasons why the 6-foot-3, 225-pound wants to get to Columbus as soon as he can.

“I love everything about Ohio State,” he said. “I can only imagine I’ll love it even more once I get up there for a visit.”

With family ties to Ohio, Jack Nickel knew he’d have a chance to see the Buckeyes campus this summer while visiting his grandfather in Columbus.

He just assumed that he’d get to meet with the Ohio State staff during that visit. The ongoing recruiting dead period prohibited that from happening, but it didn’t stop the Milton (Alpharetta, Ga.) High School prospect from checking out campus: Nickel was there on Monday.

“It was really nice,” the 6-foot-4, 225-pound Nickel said. “Downtown and the campus were great. My family and I were impressed. I’ve never really seen the city until Monday. Even though it’s a city campus, it still doesn’t completely feel like it. Ohio State is almost like its own city.”

Nickel is going to make a number of stops in the Midwest while he’s on the road. The country’s No. 12-ranked rising-junior tight end has visits to Notre Dame, Wisconsin and potentially Purdue on the docket before heading back to Atlanta. 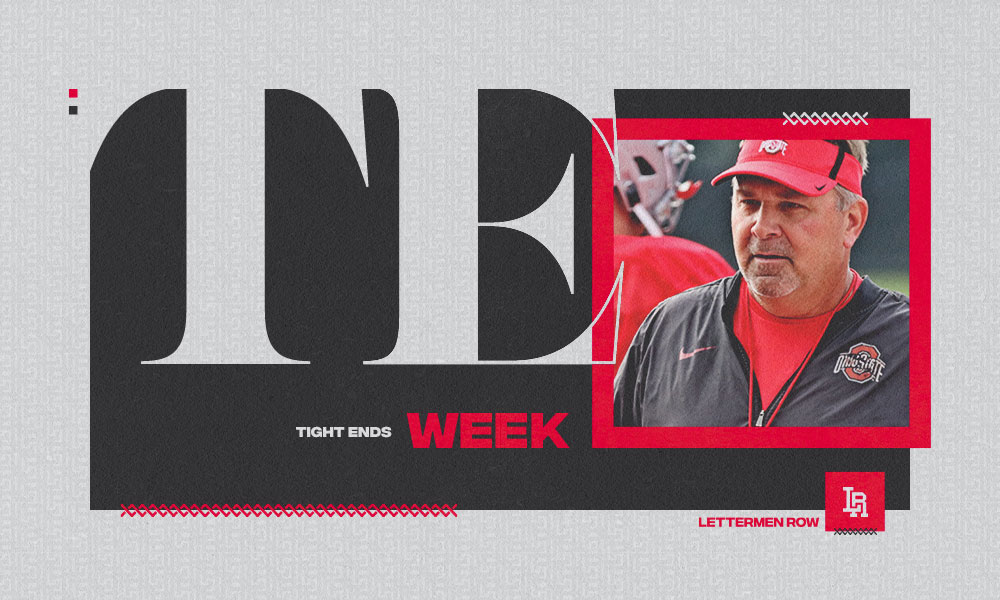 Kevin Wilson has been busy getting to know 2022 tight ends for Ohio State. (Sam Silverman/Lettermen Row)

“Ohio State is among a few schools that are really starting to make a run,” Christian told Lettermen Row. “I talk to Kevin Wilson a few times a week. He’s a great guy and I really enjoy talking to him. He’s very friendly.”

Wilson and Ohio State have offered the 6-foot-5, 225-pound, unranked tight end, and the Peach State prospect likes the way that Buckeyes tight ends leave the program as well-rounded players.

“Coach Wilson and I have sat down and watched film on Zoom together a few times now,” he said. “From what I see, I think I’d be a perfect fit in that offense. I’d be everywhere, from split out as a single receiver to my hand in the ground on the end line.

“That’s something I pride myself on as well. There are very few complete tight ends nowadays. Usually one is either a little bit bigger-bodied receiver or a little bit more athletic left tackle. I’m both. That’s the main thing Coach Wilson says he loves about me.”

Christian’s father played at Tennessee, but there’s no push for him to follow in any footsteps yet.

“My options are open,” Christian said. “From Miami and all the way to Oregon and everything in between. [Dad] wants me to go where I want to go, which I really appreciate.”

There’ve been no school visits made yet by Christian, who has 12 early offers.

Ohio State has been in touch with Spring Valley (Huntington, W.V.) 2022 tight end Corbin Page as well, the country’s No. 8-ranked player at the position.

“I talk to Kevin Wilson all the time,” Page told Lettermen Row. “He’s an amazing guy. I know if I needed something or someone to talk to — anything — he’d be there for me. We talk about football but we also talk about life. He likes to talk to my family and I love that.”

The blossoming relationship between Wilson and Page, a 6-foot-5, 250-pound prospect who could also end up as a defensive lineman, has only added to his affinity for Ohio State.

“I’m, like, in love with Ohio State right now,” he said. “It’s honestly my dream school. ”

Page was planning to attend the Buckeyes spring football game in April, but now he’ll make the short trip north to Columbus as soon as recruits are allowed to return to college campuses.

In-state tight end happy to be hearing from Ohio State

Staying closer to home, the Buckeyes are watching Kenston (Chagrin Falls) tight end Ryan Miller closely as well. The 6-foot-6, 205-pound soon-to-be junior was hoping to camp at Ohio State this summer but couldn’t, so the relationship he’s building has been over the phone.

“We have just been getting to know each better and building a relationship. And they just wanna see me keep working hard and to have a big junior year — if we have a season.”