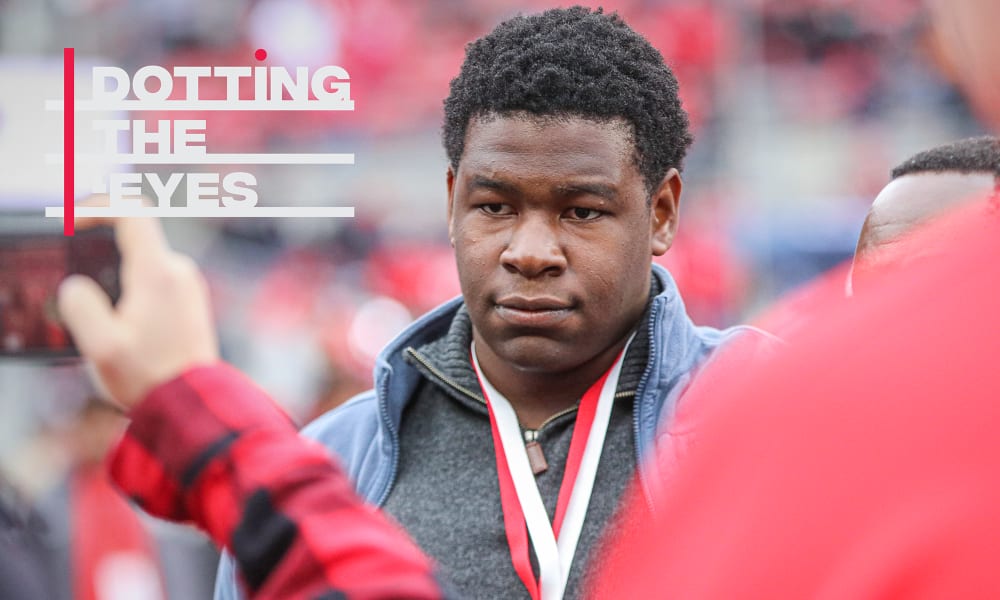 Tegra Tshabola isn't planning on making any visits to Ohio State this spring as he focuses on school. (Birm/Lettermen Row)

Stay in touch or be left out because Ohio State recruiting is a 24-hour, seven-day-per-week obsession. What’s the latest news as the Buckeyes build for the future? Get that and more Sunday through Thursday on Lettermen Row. Sunday’s notebook touches base with a local star who is trying to slow down his recruitment as recruiting heats back up at Ohio State.

Ohio State recruiting is back in business

If the month of February and the recruiting dead period therein served as a car in the road of the proverbial game of recruiting then the onset of March is the equivalent of the football gods screaming “Game on!” to college coaches and prospects everywhere.

Yes, recruiting is back and the Buckeyes, along with every other school in the country, got right back to work. Ohio State’s first day back could’ve been a major one too, especially if Clemson defensive line commitment Korey Foreman had made the trip to the Midwest with a big, talented group of California stars traveling with Premium Sports, one of the West Coast’s most influential training camps.

Foreman, a 5-star defensive end, had been tentatively included on the list of travelers but did not make the trip, but that won’t stop a dozen-or-more kids from visiting the Buckeyes, including 5-star LSU linebacker commitment Raesjon Davis, who stars for Mater Dei High School. The group is set to arrive in Columbus around 3:oo p.m. today and will be on campus for only a short while before heading north to continue on the next leg of their journey.

Davis is happily committed to LSU so there’s no expectation that any sort of recruiting theatrics are going to result from his being a part of this visit, but nonetheless it’s always good to get big-time prospects like him on campus if there’s any desire to further the relationship down the road or to try and bring him back for an official visit at some juncture.

This week, as Ohio State kicks off spring practice on Monday morning, won’t be the busiest recruiting week of this contact period for the Buckeyes but it’s a start to a pivotal six-week stretch for the Buckeyes and Ryan Day.

One player that says he isn’t expecting to make any college visits this spring despite being relatively local for Ohio State is Lakota West (West Chester, Ohio) High School 2022 lineman Tegra Tshabola.

Rather than recruiting, Tshabola says his focus is on his school work. If a visit works out within the framework of his academic requirements, he won’t rule one out, however.

“I can’t really give you a definite answer at the moment,” Tshabola told Lettermen Row. “My family and I decided to take a step back from going on any more visits so that I can finish the school year strong. I haven’t talked to [Ohio State] since last month but I’m sure they will understand if I can’t make it, they’re pretty understanding.”

The 6-foot-6, 300-pound lineman realizes that the schools he’s interested in aren’t going to return the interest if he’s not taking care of his obligations as a student.

“I like to think about it as mostly just prioritizing,” he said of the decision. “School and grades always come first. And with the end of the school year in sight, it’s important that I focus and prepare for what comes with that; for example my projects, quizzes, and exams. This is all time consuming so it doesn’t really give me the time to go on visits.”

So that’s the plan for Tegra Tshabola, but as always let me add an asterisk: plans change all the time. Don’t be surprised if the talented lineman makes his way to see the Buckeyes for a practice or the Ohio State spring game on April 11.

While Tshabola is hoping to slow down his recruiting process, that doesn’t appear to be the case for 5-star defensive lineman Tunmise Adeleye, who took to Twitter to update what should be a busy visit scheduled over the next six weeks.

Adeleye has a plan to commit in August but there’s no doubt that these next few weeks will help him sort out what has become a frustrating process for the 6-foot-4. 265-pound soon-to-be senior from Texas.

“Very,” he told Lettermen Row when asked if the recruiting process was growing tiresome for him. “I’ve been responding to texts for 45 minutes straight and I have 100 more to go. I want to get this thing over with.”

Whether or not Adeleye actually speeds up his timeline remains to be seen but he’s no doubt aware of what he’s searching for in the next few weeks. The NFL Combine helped shed some light on that for him and explains his interest in the schools that are near the top of his list.

“College is all about development. It’s very easy to pick up which programs are producing athletes at different positions and sending them to the combine,” he said. “Ohio state is a school that has a very notable track record of sending their guys to the combine and as a recruit the goal is to eventually get to the league. I want to go to a school that has a track record of sending guys to the league.”

Adeleye will see a handful of the guys that Ohio State has sent to the league when he arrives in Columbus for the Buckeyes spring game in April.