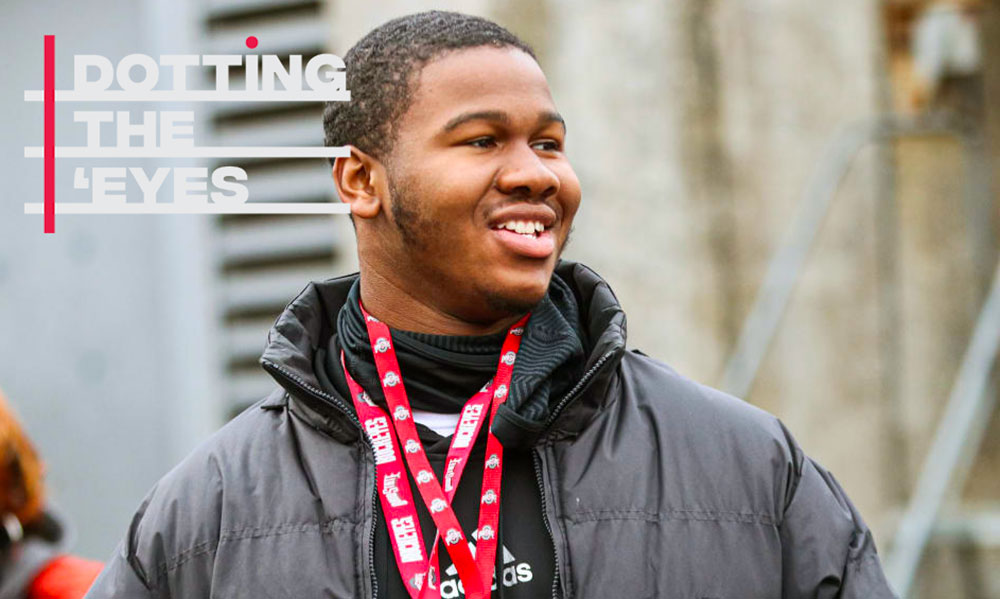 Stay in touch or be left out because Ohio State recruiting is a 24-hour, seven-day-per-week obsession. What’s the latest news as the Buckeyes build for the future? Get that and more Sunday through Thursday on Lettermen Row. Today we talk about a pair of 2021 line products from Michigan and recruitment of Kamar Wilcoxson.

The Buckeyes, like every other school around the country, have lost out on valuable recruiting time because of the NCAA-mandated dead period brought on by the COVID-19 pandemic. But the world is still turning for recruits looking for the best fit for their futures.

That means a number of kids are narrowing their top schools lists in an attempt to separate their real options amid the swirling uncertainty that’s out there. One of those players is Oak Park (Mich.) 4-star lineman Rayshaun Benny, who pared down his almost 40 offers to a more manageable list of 14 schools — which includes Ohio State.

Benny can play either side of the football, though he actually prefers to play defense. And it’s that versatility which makes him an intriguing prospect for so many schools around the country. He’s been to Columbus multiple times.

Ohio State remains in the mix for Caleb Tiernan

Another Michigan lineman narrowed his list over the last few days as well. Detroit Country Day 3-star tackle Caleb Tiernan brought his top schools list to four. His top group is all Big Ten, all the time.

Blessed for this opportunity! Thank you to all the coaches for making this an amazing experience. With that being said these are my top 4 schools Recruitment open. Edit: @Hayesfawcett3 🔥 pic.twitter.com/b1zsotWlzE

Tiernan visited Ohio State in October and has remained in regular communication with Buckeyes offensive line coach Greg Studrawa since.

“I’ve been mostly talking to Coach Stud,” Tiernan told Lettermen Row. “Before all this [pandemic], I was planning to head down for the spring game and the practice the day before.”

The relationship between Studrawa and Tiernan is what keeps the Buckeyes in the mix for Michigan’s No. 11-ranked prospect.

“I chose those final schools for a reason,” Tiernan said. “They all have a good mix of football and education. I felt that those schools give me the best chance at achieving what I want football-wise and for life post-football.

“Right now I’d say I have a pretty good relationship with Ohio State. Last week me and Coach Stud talked on the phone, and we talked about how we were doing, when I could come back up. With the shut down of everything, I plan to go back whenever they allow recruits back on campus.”

The opportunity to get back to college campuses will play a big role in Tiernan’s final decision.

“To be honest, I feel like it will come down to the official visits,” he said. “All four of the schools have a good program and good education, so I feel it’s going to be the people, players and overall feel that will separate one from the others.”

The buzz around Ohio State and IMG Academy 4-star safety Kamar Wilcoxson received another boost last week as the program’s commitment flurry caused many to wonder if the 6-foot-2, 185-pound defensive back could be next.

The two-time Florida verbal isn’t exactly shying away from the conversation either, but there’s no reason to expect that anything imminent is on the way.

“I’ve been getting close with [Ohio State defensive coordinator] Kerry Coombs,” Wilcoxson told Lettermen Row. “And I’ve been talking to the commits a lot.

“Hopefully the in-person recruiting ban is over on April 15, because I’m home until April 20, so I may go to Ohio State for two or three days then.”

If Wilcoxson is interested in flipping to the Buckeyes, then his first visit to Columbus will be instrumental in leading to that. It’s unlikely that anything would happen between Ohio State and Wilcoxson until then.