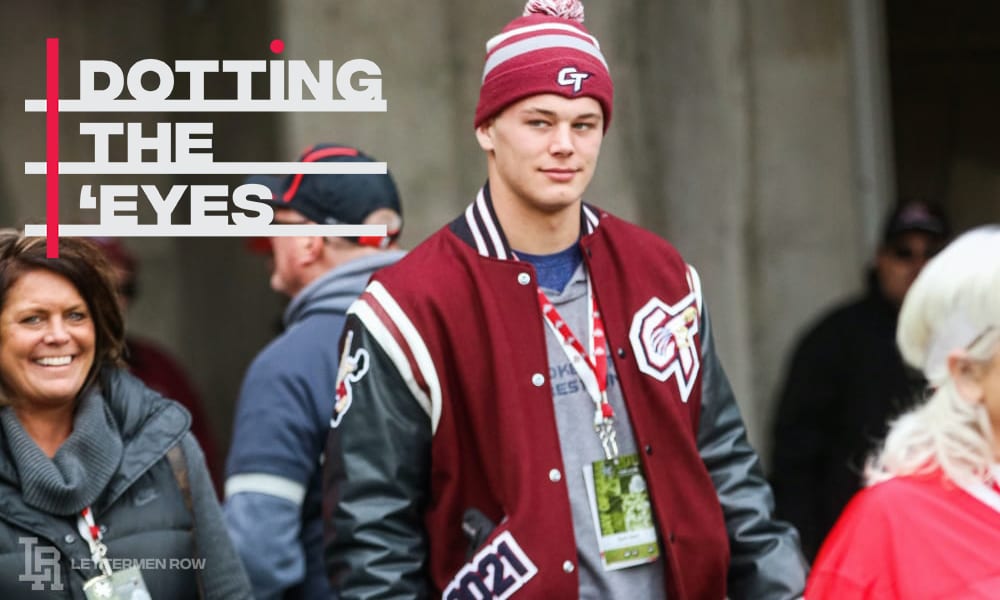 Colorado tight end Sam Hart has made two visits to Ohio State and has the Buckeyes on the top of his list. (Birm/Lettermen Row)

Stay in touch or be left out because Ohio State recruiting is a 24-hour, seven-day-per-week obsession. What’s the latest news as the Buckeyes build for the future? Get that and more Sunday through Thursday on Lettermen Row. On Wednesday, we talk about another junior tight end with serious Ohio State interest and a decision date for Virginia standout Bryce Steele.

The Buckeyes are the current team to beat for Cherokee Trail (Aurora, Colo.) High School 2021 tight end Sam Hart, a 4-star prospect who visited when they played Penn State two weekends ago.

“I think as of right now they are my top school,” Hart told Lettermen Row. “They fit everything that I am looking for from academics, great football, connection with the coaches — and they have a great history.”

Ohio State running backs coach Tony Alford has been the primary recruiter for Hart, like most kids in Colorado. And recently the contact has increased with tight ends coach Kevin Wilson. That duo led the conversation during the 6-foot-5, 225-pound tight ends most recent trip to Columbus, his second visit overall.

“We have a good relationship, ” Hart said. “Coach Alford and Coach Wilson are always texting me and keeping up with me. It is probably the best relationship that I have out of all the coaches that have been recruiting me. They text me and keep up with me every day, and they told me I am their No. 1 guy and really want me.

“They tell me how I will be a perfect fit for their offense and I feel comfortable with and built a good relationship with them.”

Hart has a tentative plan in place for a decision but it’s not anytime real soon. Probably.

“I will for sure make a commitment this spring or earlier,” Hart said. “I’m not 100-percent sure on how many official visits I will use, but it will depend on when I commit. Notre Dame, USC, Washington and LSU are some of my other top schools.”

Another 2021 tight end who visited Ohio State two weeks ago was Louis Hansen, who we talked with following that trip and wrote about earlier this week.

On Tuesday night, Ohio State repaid that visit by the 6-foot-4, 222-pound tight end with a scholarship offer.

Hansen is the country’s No. 8-ranked tight end and the second-ranked prospect in the state of Massachusetts in the Class of 2021.

After making a whirlwind tour of visits that took him to Ohio State, North Carolina and Michigan, 2021 3-star defensive back prospect Bryce Steele has set a commitment date.

I will be announcing my college decision on January 1st, 2020 to start the New Year off right‼️

Steele was offered by the Buckeyes in June and returned just two weeks ago to Columbus before traveling to North Carolina — where the Virginia resident is originally from — and then Michigan, where he saw Ohio State take on the Wolverines.

That trio of schools likely includes the eventual winner in this recruitment of the Episcopal (Alexandria, Va.) safety/linebacker prospect. Right now, 100 percent of the 247Sports.com crystal ball predictions — three of them — are in favor of Ohio State, though most of those picks are based on the early reaction from Steele to his offer from the program. The Buckeyes have been recruiting Steele at their Bullet position along with Cincinnati La Salle prospect Jaylen Johnson, who is expected to make his college decision next May.

Forced to make a pick today, I’d pick the field over Ohio State in this battle, but there’s plenty of time for that opinion to change.

There are a number of big-time defensive linemen on the radar for Ohio State in the Class of 2021, but one of the biggest fish in that class is Korey Foreman, a 6-foot-4, 245-pound end from Centennial (Corona, Calif.) High School.

Foreman is currently ranked as the country’s No. 1 overall prospect in the Class of 2021 — one spot ahead of Buckeyes commitment Jack Sawyer. He’s obviously a prospect being courted by every major program in America, including Ohio State.

To this point, Foreman has not visited the Buckeyes, but there’s a hope he will in the next month or by spring at the absolute latest. It seems that the recent success of Chase Young and the resulting publicity for him has begun turning Foreman’s attention a little bit.

Foreman has had interest in the Buckeyes for a while now, and it’s worth monitoring his actions from here — especially if he makes getting to Columbus a priority anytime soon.