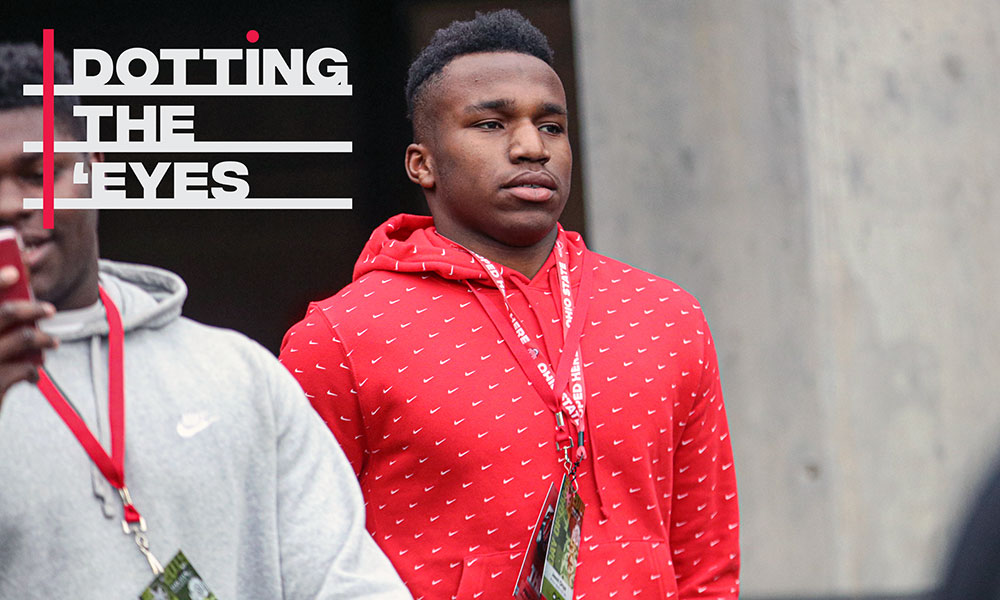 Stay in touch or be left out because Ohio State recruiting is a 24-hour, seven-day-per-week obsession. What’s the latest news as the Buckeyes build for the future? Get that and more Sunday through Thursday on Lettermen Row. Today’s notebook talks about an intriguing defensive lineman from Rhode Island and updates the chase for a title by Ohio State commit Sam Hart.

The Buckeyes hosted Warwick (R.I.) Bishop Hendricken for a game-day visit in November and the conversation between the 6-foot-5, 240-pound defensive end and Ohio State has continued since.

“I’ve still been taking to [Buckeyes defensive backs assistant] Matt Barnes and [defensive line coach] Larry Johnson,” Onye told Lettermen Row. “They’re just telling me that they can develop me into something great and how I’ll be able to contribute to a team like theirs.”

Ohio State though has not yet offered Onye as it continues to get to know the 3-star prospect and build its relationship with him. The nation’s No. 27-ranked weakside defensive end is raw but athletic and the Buckeyes — who likely need three defensive ends in the Class of 2021 — are going to be sure he’s the right fit before extending that offer. Still, Onye says the conversations with Ohio State are something he relishes.

“Talking to the Ohio State staff is always a highlight for me,” he said. “I like how they’re honest and upfront with what they see in me. They’re high up there relationship-wise with me.

“Coach Johnson said he doesn’t want to just fill his room with defensive ends and wants to make sure if he is to make an offer, it would benefit me and be in my best interest and allow me to play there.”

The top-ranked prospect in Rhode Island is sure to have a busy spring with visits around the country and he says that Ohio State is one of the places he’s hoping to get back to.

“I am hopefully visiting there in March, or maybe April,” he added. Notre Dame has the lone 247Sports.com crystal ball prediction for Onye right now. He has not yet been on campus with the Irish but says he’ll be there for a two-day trip at the end of March.

On Saturday, he took the mat again with a chance to atone for last year’s loss and did so with a perfect record on the line and with the hopes of becoming the first-ever state champion from his high school.

Hart didn’t miss this time around.

The Buckeyes tight end commitment has credited his wrestling background for his football success and there’s no doubt that one of the reasons the 6-foot-5, 220-pound athlete caught the attention of the people at Ohio State. The country’s No. 17-ranked tight end has been described to Lettermen Row as a “poor man’s Jeremy Ruckert” because of his athleticism but he’s not been as visible in the national recruiting spotlight as he’s focused on wrestling and football, not recruiting camps and things that generally draw that sort of attention.

Hart will have a state title to defend next winter but now it’s time to focus again on football and that means getting himself back to Columbus and with his future teammates and coaches at Ohio State.

“I’ll be at the spring game for sure,” Hart said of his next visit to Ohio. “Then I’m still deciding when I want to take my official. I’ll be back for a game next season too but hopefully for a trip in the summer, too.”

“He watched me work out in the morning then came to a wrestling practice later that day,” Hart said of the visit. “It was great to see him again, it wasn’t too different being a commit as it was before. He just talked about how great I look and said he can’t wait to work with me. There is still a ton of love from Ohio State.”

Hart says some schools have continued to try and recruit him but there’s no interest on his part,

“I haven’t really been responding,” he said of other schools trying to talk to him. “So it’s as much of that as it is them backing off.

For the majority of the last year, Steilacoom (Wash.) 5-star prospect Emeka Egbuka was ranked as an athlete, a nod to his elite athleticism and to the fact that some schools were recruiting the 6-foot-1, 190-pound standout as a defensive back while others viewed him as a wide receiver.

Ohio State and its receivers coach, Brian Hartline, never wavered on how they viewed Egbuka and it appears the rest of the country has finally caught up. Egbuka, who has been a Top 10 prospect regardless of position for a year now, is now ranked exclusively as a receiver and to no surprise, his first ranking is right at the top of the list.

He’s now the country’s No. 1-ranked wide receiver according to 247Sports.com and its composite ranking. This weekend, at the Pylon 7-on-7 National Tournament, Egbuka put that new ranking on display and — at least through the first day of the event — has backed up his new position.

247Sports No. 1 WR Emeka Egbuka has been the most dominant player at @Pylon7on7 Vegas. This is his seventh score in two-plus games: https://t.co/SwBjnrpwPH pic.twitter.com/O1GT4b2ate

Ohio State remains very much in the mix for Egbuka, who is still considering the Buckeyes along with Clemson, Washington, Stanford, Alabama, Oklahoma and others.

Hart sounds like a crazy athletic TE prospect. Wrestling is the toughest sport there is, I might be biased about that.

I believe his athletic ability is going to be a major surprise for people who get to see him.