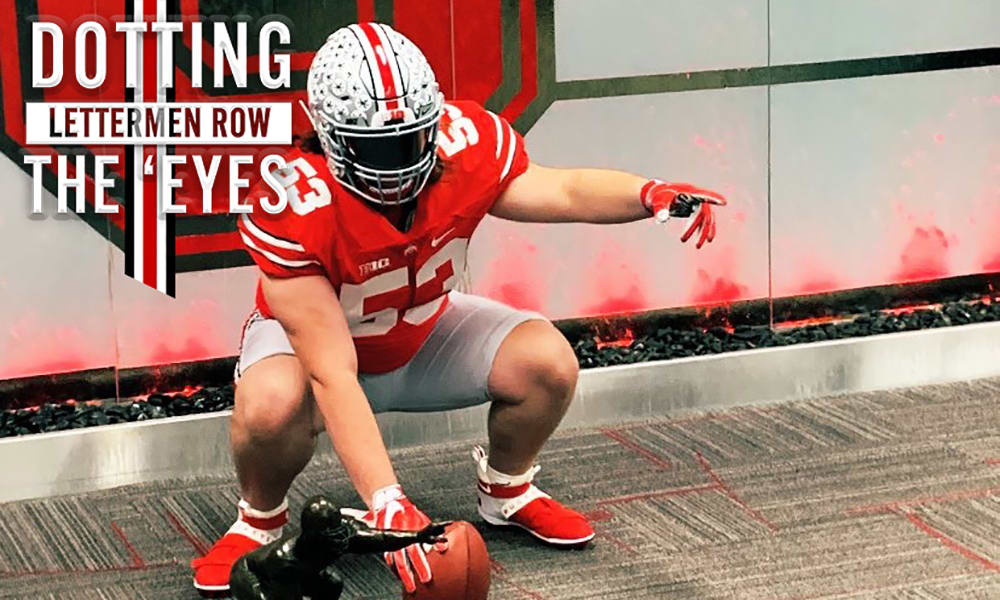 Stay in touch or be left out because Ohio State recruiting is a 24-hour, seven-day-per-week obsession. What’s the latest news as the Buckeyes build for the future? Get that and more Sunday through Thursday on Lettermen Row. Tuesday’s notebook has an update on Ohio State 2021 targets from Ohio and Texas and also talks to a local defensive end hoping to earn a Buckeyes offer.

Ryan Linthicum sees what he needs at Ohio State

A few days ahead of his first unofficial visit to Ohio State, Damascus (Md.) 4-star offensive lineman Ryan Linthicum was clear about what he wanted to see.

“I need to find somewhere that if I get hurt or I can’t play football anymore, that I would still want to be there,” Linthicum said. “That’s one key factor. I’ve learned what I’ve been looking for in the school and the academic part of the search.”

After his visit, Linthicum he saw what he needed at Ohio State to keep it on his shortlist heading into what will be a pivotal summer in his recruitment.

“It was awesome,” he said. “I loved it. Just how passionate they are. They showed me the plan they have for me. It was a great first impression. They’re definitely in my top group.”

Linthicum, 6-foot-4 and 275-pounds, made the visit with his father, who also left campus very impressed by what Ryan Day and his program had to offer.

“My dad loves it there,” Linthicum said. “They did a great job showing that it was more than just football. There’s such a big alumni base and support system.”

WOW!!! after a great conversation with @CoachGMattison I am humbled and EXTREMELY blessed to receive a scholarship offer from my childhood dream school
“THE” OHIO STATE UNIVERSITY pic.twitter.com/uw5IeyXqDw

The bad news? Adeleye quickly called Ohio State his “dream school.” That’s usually a death knell in any recruitment, so we’ll have to wait a bit to see how this one plays out. So why does a 6-foot-3, 260-pound sophomore defensive tackle in the Lone Star State love the Buckeyes? He admits it started because he was a bit of a bandwagon fan growing up.

“It’s just the school I attached to early on,” Adeleye told Lettermen Row. “I started watching football around third grade but didn’t start playing until the fifth grade, and at that time the dominant team in college football was Ohio State. You could say while I was young it was more of a bandwagon feeling.

“As I grew older and learned about the culture there and the history of developing elite defensive linemen, my feelings towards the school grew stronger. I’ve been in Ohio before — to Columbus and Cleveland — but I never had the chance to visit Ohio State. The state is really nice to me, and I could envision myself living there.”

That previous visit to Ohio was when Adeleye, Texas’ seventh-ranked 2021 prospect, was in the sixth grade. He will be back to town this summer in an effort to work with Greg Mattison and Buckeyes defensive line coach Larry Johnson in person.

“Me and my dad, we’re definitely going to be out there this summer,” he said. “That offer means everything to me, man. I’ve grown up watching Ohio State and for them to believe in me and offer me a full-ride scholarship just means the world.”

So why did the Buckeyes offer now? Mattison was able to explain their reasoning to his high school coach.

“He likes my tenacity,” Adeleye said. “He believes I provide position flexibility at the next level due to having weight but also speed. He said that I’ve been on their radar for some time, but they haven’t really started recruiting the 2021 class until now.”

Gage Keys gets more attention from Ohio State than expected

Hilliard Davidson 3-star defensive end prospect Gage Keys was surprised during his recent visit to Ohio State. The 6-foot-5, 240-pound athlete always knew about the Buckeyes. What he didn’t know was that Johnson and Ohio State were actually interested in knowing about him.

Had a wonderful visit to @OhioStateFB today🔴⚪️ B1G thank you to the whole staff for having me down. Can’t wait to be back!!! #gobucks pic.twitter.com/rjr9pGabwr

“The best thing for me was Coach Johnson’s presentation,” Ohio’s 44th-ranked prospect in the Class of 2020 told Lettermen Row. “He believes he can develop me not only into a great college player, but someone who can thrive in the NFL.

“I think that helped me realize they’re more interested in me than I originally thought. It seemed like they had a lot of other ends they were recruiting harder than me.”

Keys has 14 offers, including Big Ten schools like Minnesota, Indiana and Rutgers. An Ohio State offer would almost certainly end his recruitment — and to get one, he’ll need to show Johnson exactly what his college-ready frame can do on the football field at a camp this June.

“I’ll be going there to camp,” he said. “Coach J just talked a lot about how he believes I can be great at the highest level. He said that my offseason work put me closer to the top.”

An offensive lineman Ohio State had expected to see for an official visit this June is no longer expected to make the trip to Columbus.

Aurora (Colo.) 4-star Roger Rosengarten, according to a source close to the Buckeyes, has informed Ohio State that he’s no longer considering the program.

“He dropped Ohio State,” the source said. “Not sure why. It looks it’s Washington or Oregon.”

Rosengarten told Lettermen Row he was being recruited by both offensive line coach Greg Studrawa and running backs coach Tony Alford and has not confirmed the cancellation of the official visit, but it seems the list of offensive line options for Ohio State has taken another hit.