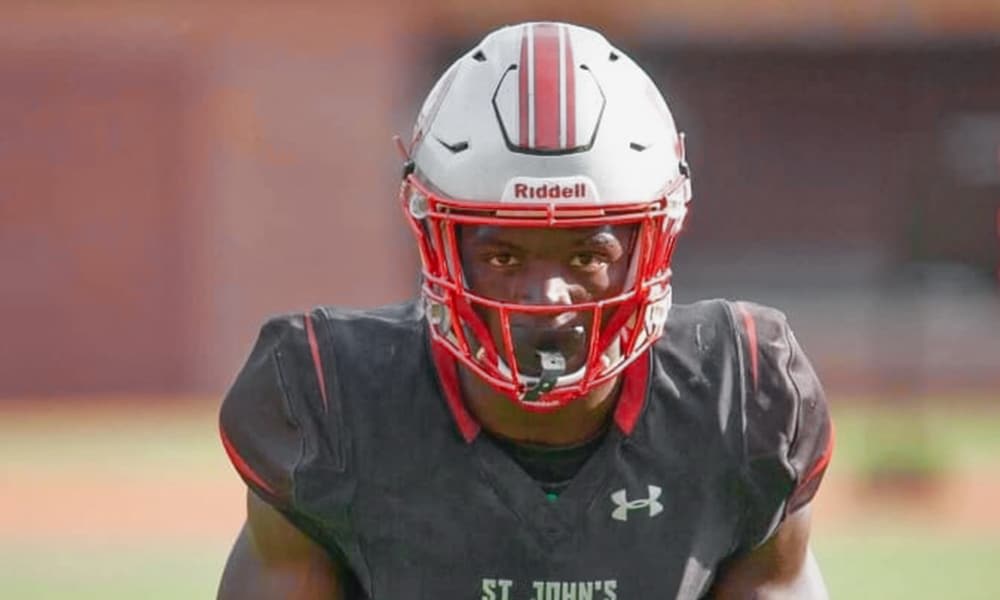 Rakim Jarrett's recruitment has been a rollercoaster ride for Ohio State. (Rakim Jarrett/Facebook)

Have a question about Ohio State recruiting? This is the place for you, five days a week. Submit your questions on Twitter or on the Lettermen Row forums. Check in daily to see what’s on the mind of Buckeyes fans all over the country. This afternoon’s question is about 2020 receiver Rakim Jarrett, one of the country’s best prospects and one of the country’s hardest to follow recruits.

Rakim Jarrett…..does he have another visit planned?

There’s an old adage that goes: “If you want to make God laugh, tell Him your plans.”. In recruiting, it could be: “If you want to drive yourself crazy, try to figure out what Rakim Jarrett’s plans are.”

Long story short, yes, I am sure Jarrett is planning on taking another trip to Ohio State at some point. But when and for what reason? That’s anyone’s guess.

The 5-star receiver from St. John’s College High School (Washington D.C.) is undoubtedly one of the nation’s best overall prospects. And as much as I resist using the label, he’s one of the few players in 2020 that I consider a can’t-miss type of guy because of his incredible natural talent combined with a tireless work-ethic.

He’s also become as difficult to cover off the field as I am sure he is on it.

Last summer, trying to project Jarrett’s eventual college decision seemed easy. He was always a fan of Ohio State, so much in fact that his 247Sports.com crystal ball still tilts in its favor despite an overwhelming amount of evidence that suggests he’s leaning anywhere but there at this point. In the past few months, it’s been Georgia, it’s been LSU, it’s been Alabama and now it’s Tennessee that has climbed into the supposed lead to land him. Schools like Ohio State and Clemson have not seen him on campus recently. Jarrett’s been unable to make a six-hour drive to Columbus, but he did find the time and opportunity to take a 10-team SEC tour in early March. It’s been pretty clear that things have faded a bit between the Buckeyes and the 6-foot, 190-pound All-American.

Why have they faded? That’s open for interpretation, I guess. It’s reasonable  to assume the retirement of Urban Meyer affected Jarrett in a similar fashion that it did his 5-star teammate at linebacker, Mekhail Sherman. Ryan Day has a reputation as a major offensive mind and Brian Hartline is still the receivers coach, and those two elements should have mitigated some of the turmoil that Meyer’s retirement caused. So, I’m not sure I buy into that as much with Jarrett as I do Sherman, who saw the Ohio State defensive coaching staff turned over.

Recruiting is about relationships, and relationships do not work if they’re one-sided. Things don’t really work if only one half of the partnership is sharing their thoughts, feelings and dreams, you know?

A successful relationship can’t be built if a hypothetical partner clams up whenever somebody tries to talk to them about important things. It’s hard to plan a future with someone if they don’t make the time because they’re too busy — but somehow they are with someone new every weekend.

If this is hitting too close to home, I apologize. But recruiting is about people and personal decisions. For Ohio State and Rakim Jarrett, there’s been a disconnect in recent months. It’s impossible to describe it any other way.

The good news for the Buckeyes is that Jarrett seems to recognize it and has spoken in the last few weeks about a renewed “spark.” But it’s fair to wonder what it truly means or what really caused it. Whatever the case is, Jarrett is a guy that Ohio State would love to add to its recruiting class and eventually its roster.

But the coaching staff isn’t going to beg a player to be a part of what it’s doing if a player would rather be somewhere else. If Jarrett wants to play at Ohio State, he’ll make getting back to Columbus a priority. The Buckeyes will wait, but I don’t think they’ll chase.