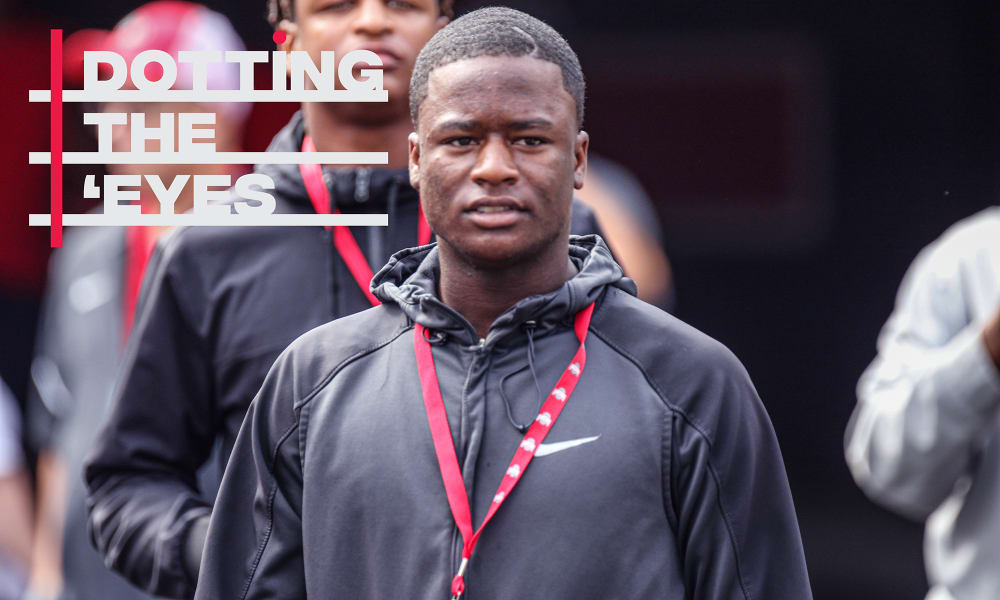 Qian Magwood is a talented two-sport athlete who continues to hope for an Ohio State offer. (Birm/Lettermen Row)

Stay in touch or be left out because Ohio State recruiting is a 24-hour, seven-day-per-week obsession. What’s the latest news as the Buckeyes build for the future? Get that and more Sunday through Thursday on Lettermen Row. Tuesday’s notebook catches up with local standout Qian Magwood and hears from 2021 5-star cornerback Tony Grimes who recently releases his top schools list.

Ohio State hosted a number of intriguing prospects over the weekend, and one of the more interesting players to be on campus was Walnut Ridge 3-star athlete Qian Magwood.

“It was a great day,” Magwood told Lettermen Row. “I got a chance to talk to Ryan Day and the rest of the staff, too. It was a good visit.”

There is a large disparity between Magwood’s ranking on 247Sports.com, where he checks in as the 19th-ranked player in Ohio, compared to his composite ranking, which has him at No. 54 in the state. Some of that could be because his future position remains very up in the air. He’s heard from multiple Ohio State coaches for the last year, and there’s no consensus on what his best future is — though he’s coming up with some ideas about it.

“I’ve been in contact with Jeff Hafley, Brian Hartline and Day,” Magwood told Lettermen Row. “I like the new coaching staff, they’re energetic. They still are labeling me as an athlete, but considering the wide receivers in this class of 2020, I think they want me for defense.”

The 6-foot-1, 185-pound athlete prefers to play offense, but he is willing to go and do whatever it takes to get where he wants to be.

“I personally feel I’m a wide receiver at the next level,” Magwood, who holds seven scholarship offers, said. “But if they needed me both ways, I could do that.”

The Buckeyes are hoping to land 5-star 2021 cornerback Tony Grimes and had a good first visit with him on campus this summer.

On Tuesday night, the country’s top-ranked cornerback announced his top-13 schools list and kept Ohio State in the mix for his services.

“Ohio State is one of those ‘DBU’ schools,” Grimes told Lettermen Row. “The coaching staff treats me like family, and it’s a strong environment. Plus, Ohio State is a school I know will develop me.”

The important thing from here is for Ohio State to find a way to get Grimes back on campus for a game this season. The in-stadium atmosphere for a game against Michigan State, Wisconsin or Penn State is often a recruitment-changing experience for recruits, and the need for a top-tier corner or two in the Class of 2021 will be clearly spelled out for Grimes regularly over the next year and a half.

On Sunday night we updated the visits of a pair of 2022 in-state prospects, running back Stephan Byrd and linebacker C.J. Hicks. Hicks is from Dayton, but he wasn’t the only sophomore standout from that part of the state in attendance.

Adam Trick, a linebacker at Huber Heights Wayne High School, was excited to be asked to visit Ohio State for the first time as a recruit.

“It was an amazing experience,” Trick told Lettermen Row. “It’s humbling to be there as a recruit. The atmosphere was electric.”

Trick has been recruited by Ohio State tight ends coach Kevin Wilson, who worked with the 6-foot-4, 200-pound prospect at a camp in Columbus in June. It was Wilson who spent the majority of the day with Trick on Saturday.

“I talked to Coach Wilson after the game,” Trick said. “He said I have great size and some of the unteachable stuff that you need to have. He was excited to see my growth and wants to stay in touch. He also introduced me to Coach Day. It was my first time meeting him.”

The message after the game was simple but hinted at the notion that the Buckeyes could be in touch a lot more in the future.

“[Wilson] thanked me for coming,” he said. “He said he will be seeing me a lot in the future.”

Analyzing impact of Reid Carrico committing to Ohio State
What are chances Ohio State flips a big-time running back?