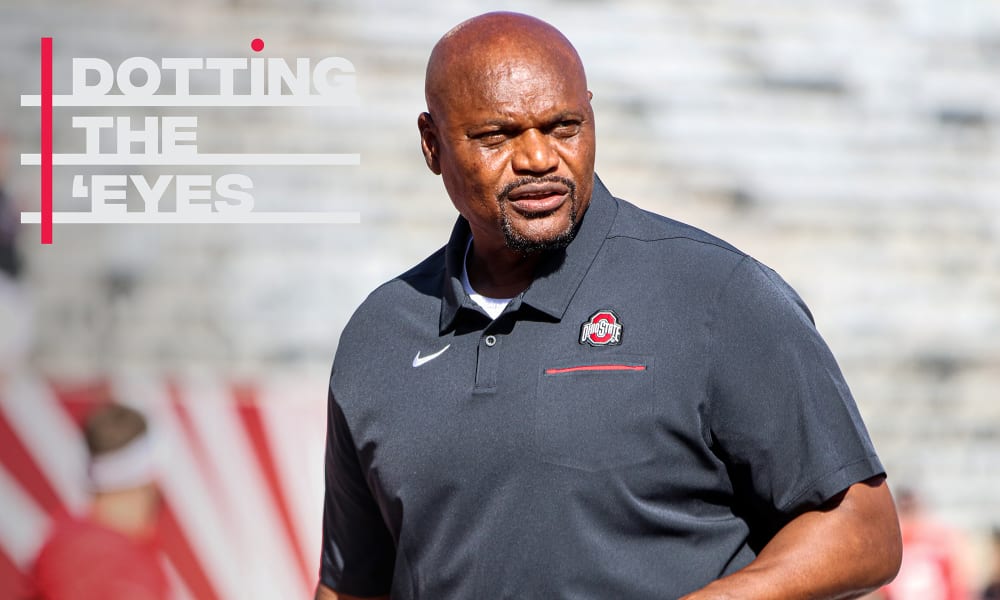 Stay in touch or be left out because Ohio State recruiting is a 24-hour, seven-day-per-week obsession. What’s the latest news as the Buckeyes build for the future? Get that and more Sunday through Thursday on Lettermen Row. Thursday’s notebook examines the interest of a newly decommitted defensive lineman, talks about a New Jersey defensive back who will visit the Buckeyes for the Wisconsin game and more.

We talked on Tuesday about the defensive line recruiting efforts in the Class of 2020. Yes, those efforts are still primarily focused on Knoxville (Tenn.) 4-star Tyler Baron but also include Utah defensive end Xavier Carlton.

A new name could find that list if the Buckeyes are interested in pursuing it after the Wednesday decommitment of 4-star defensive end prospect Princely Umanmielen.

Umanmielen, from Manor (Texas) High School outside of Austin, reopened his recruitment after being committed to the Longhorns for only about two months.

A 6-foot-4, 250-pound defensive end, Umanmielen surprised many when he committed to Texas over Texas A&M in August. Schematically, he’s not really a fit at Texas, and in talking to people around the prospect on Wednesday, it was that uncertainty that drove the decision to open his recruitment again.

Now that he’s available again, the country’s 11th-ranked defensive end will explore the opportunities at a few schools that people expect like Texas A&M and Oklahoma — but he also mentioned Auburn and Ohio State as other schools of interest. Why the Buckeyes?

Whether or not the Buckeyes are interested remains to be seen. But the desire for another defensive lineman is real, and if the interest from Umanmielen is as well, it’s likely the Ohio State staff will at least take a look. He’s a big-bodied, high-upside prospect who could play inside or outside at the next level.

Speaking of defensive linemen, earlier this week we also talked about the Class of 2021 and mentioned how Damon Payne from Belleville (Mich.) remained a top target for Ohio State with mutual interest from the player.

Payne, a 6-foot-4, 275-pound defensive tackle, visited Columbus earlier in October for the Michigan State game and is returning to see the Buckeyes again Saturday as they take on Wisconsin. The reason for a second trip this soon is simple: Payne told the Ohio State staff he’d return this season, and so he is.

“I told them I’d be back,” Payne told Lettermen Row. “So, I’m just trying to keep my word. We’re trying to go to different places weekly and enjoy the process.”

Last week it was Iowa for Payne, who — aside from Ohio State — is very high on Alabama, among others.

New Jersey defensive back has Ohio roots, excited to visit

On Sunday we introduced New Jersey defensive back Duce Chestnut here, and he told Lettermen Row that he’d be visiting Columbus this weekend for the first time and would be accompanied by his teammate and friend Alijah Clark.

It will not be the first time Clark, a 6-foot-2, 180-pound defensive back, has been to Ohio. His mother is actually from central Ohio.

“My mom is from Columbus,” Clark told Lettermen Row. “So, this weekend was a must-attend for me. Coming to see a Buckeyes game being a fan and my family living down there. It will be very special.”

Clark isn’t just a tag-a-long. He’s a legitimate Division I prospect who has six early scholarship offers — including Maryland, North Carolina State, Temple and West Virginia. He, like Chestnut, has been talking somewhat regularly with Jeff Hafley and Matt Barnes, the defensive back recruiting team for Ohio State.

One defensive back who won’t make it to Columbus this weekend is Katy (Texas) 4-star 2021 prospect Hunter Washington.

The country’s 18th-ranked junior cornerback, Washington had intended to visit Ohio State for the Michigan State game but was unable to arrange the trip. Instead, he hoped to visit the Buckeyes for the Wisconsin game. That will also not happen.

“I’ve got film study this weekend, so I can’t make it,” Washington told Lettermen Row. “If it was a night game I could’ve.”

The next potential visit for Washington is now the November clash with Penn State.