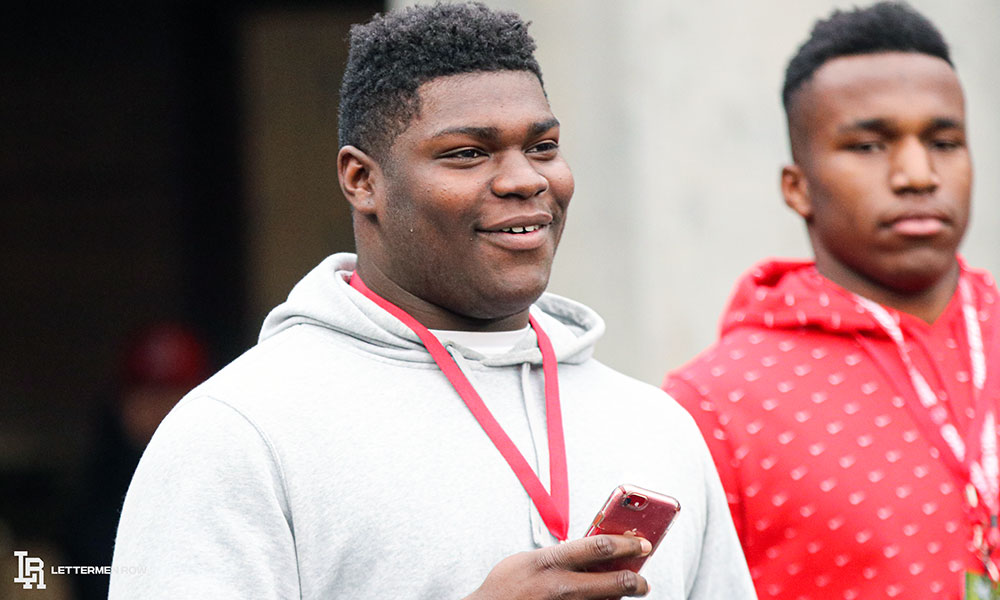 Tywone Malone is an important piece of the puzzle in the Buckeyes 2021 class. (Birm/Lettermen Row)

COLUMBUS — There are just about six months until Ohio State football recruits in the Class of 2021 can put pen to paper and officially become Buckeyes.

That means there are at least six months left of intrigue and wonder about who is going to join the country’s top-ranked recruiting class as the Ohio State football staff looks to upend the SEC for the first time in more than a decade and sign what could end up being the highest-ranked group in the history of the internet recruiting era.

Currently, Ohio State has 18 commitments and among them are four different players who are ranked as 5-star prospects according to the 247Sports.com composite rankings, while Rivals.com also lists defensive lineman Tunmise Adeleye in that rarified air. It’s a class that is balanced and talented but is also only three-quarters full at this point. That’s going to change and the Buckeyes are swinging for the fences to finish it as strong as they’ve started it.

Now that we’ve reached the halfway point of the 2021 recruiting cycle, who stands out as the prospects most likely to round out Ohio State’s class? Lettermen Row is making some predictions.

Here’s how, on May 22, we see the Buckeyes finishing this cycle, starting on offense.

That would bring Ohio State to 25 members of the 2021 class and a group that would yield a composite recruiting “score” of 328.04, the best in the modern recruiting era. The Buckeyes have work to do with each of these players and there is so much uncertainty on the recruiting trail in general because of the Covid-19 pandemic but right now, they are in good shape to be the ultimate choice.

Getting a little deeper into these recruitments, here are the timelines and biggest hurdles to clear.

Egbuka has had two Ohio State visits in 2020 cancelled because of the pandemic and there’s going to be some concern about other teams slipping intoo the mix because of the uncertainty around when he’ll actually be able to get back to campus. Schools involved here include Washington, Oklahoma and Clemson and each of those programs is no doubt trying to sell Egbuka on the idea that the Buckeyes wide receiver room is “too deep” and that he’s better off elsewhere. The relationship with Brian Hartline is the best single connection for Egbuka on the recruiting front, though. The sooner that the country’s top-ranked receiver can get back to Columbus, the better, but for now the bonds with the Buckeyes are too much for another program to overcome.

Tennessee and Ole Miss are trying to upset the Buckeyes in the recruitment of Wolfe, who Rivals.com lists as the nation’s No. 1-ranked tight end. Wolfe has only been to Ohio State one time and that’s an advantage for their foes but he’s been the absolute top target for Buckeyes tight ends coach Kevin Wilson since last summer and that goes a long way for recruits and their families. Ohio State commitment Sam Hart has grown very close with Wolfe as have the rest of the current crop of Buckeyes verbals. Wolfe has no timeline for a decision so his choice may come down to whether or not he feels getting back on campus for a return visit — with his mother especially — is a requirement before an announcement is made. 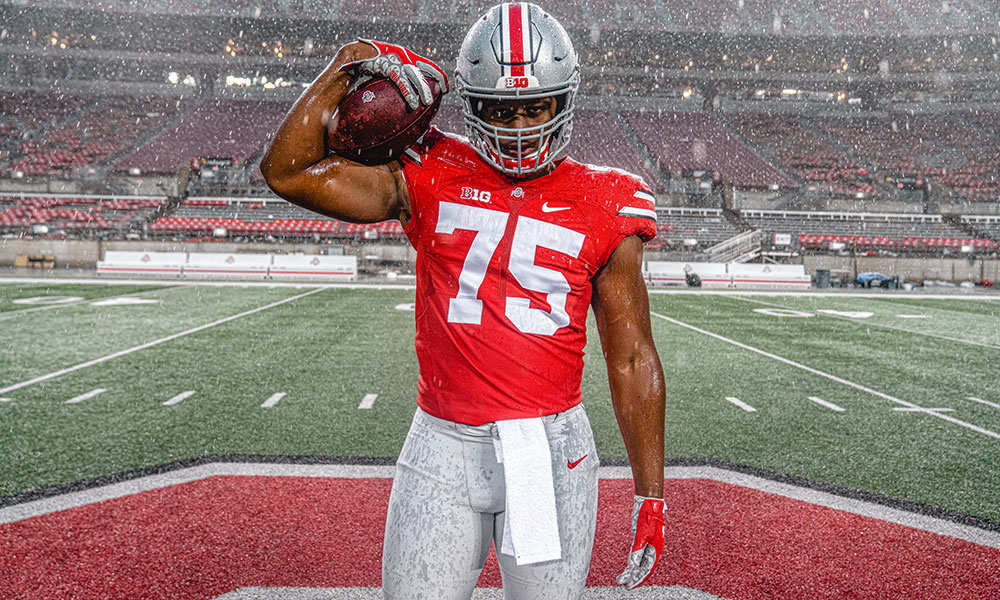 Ohio State needs to fight off the onslaught of Alabama, LSU and Oklahoma if it wants to land J.C. Latham. (J.C. Latham/Courtesy)

Latham, the country’s top-ranked offensive tackle, wanted to be committed by this point but like so many other recruits he saw his plans get changed by the coronavirus outbreak. Ohio State and LSU were the primary contenders for much of the last six months but the additional time has allowed Alabama and Oklahoma to make a big move, especially the Crimson Tide who are promoting their NFL Draft success. The Buckeyes have the best longterm relationship with Latham but need to overcome a perception that they have an abundance of offensive tackles on the roster capable of keeping Latham off the field. For Ohio State, Latham getting back to the football field and the stability that it provides could help stem the Tide, quite literally.

It’s very — very — rare that a player ranked inside of the top 10 nationally will commit sight unseen to any college program, even one as high-profile as the Buckeyes. The 6-foot-5, 290-pound Tuimoloau is also very rare. In a day and age when top-tier recruits are typically relentless in their self promotion, the country’s No. 2-ranked overall player stays far away from the spotlight and so does his family. His recruitment is a bit of a mystery but he’s developing a solid relationship with Ohio State and Larry Johnson and according to people who know, feels that playing for Johnson could elevate his game even more. He needs to get on campus though and like fellow Washington-resident Emeka Egbuka, the sooner it happens the better.

Malone is a different kind of defensive tackle than Tuimoloau and the Buckeyes are working overtime to try and land them both in the Class of 2021. Like Tuimoloau, there’s not a lot of actual discussion from Malone about his recruitment and a lot of the talk around him is just that: talk around him. That said, the talk around him is pretty positive when it comes to Ohio State but Alabama, Rutgers, Texas A&M and others are hoping for an official visit to throw a wrench into the Buckeyes plans. The fact that Malone seems intent on playing baseball in college could also provide a similar wrench. Still, the buzz is positive for Ohio State and Larry Johnson is very involved in this recruitment.

Davies told Lettermen Row he probably would have committed to Ohio State this spring if he’d been able to make a visit he had planned. The Buckeyes are working to make that visit happen as soon as possible and when it does, the talented defensive back from California is the prime target to complement Jakailin Johnson and Devonta Smith at cornerback in the Class of 2021. Arizona State is fighting to keep Davies on the West Coast. Ohio State would love to land a talented cornerback from anywhere but adding one from Mater Dei High School, one of the country’s most talent-rich programs? That makes the potential addition of Davies even more valuable. 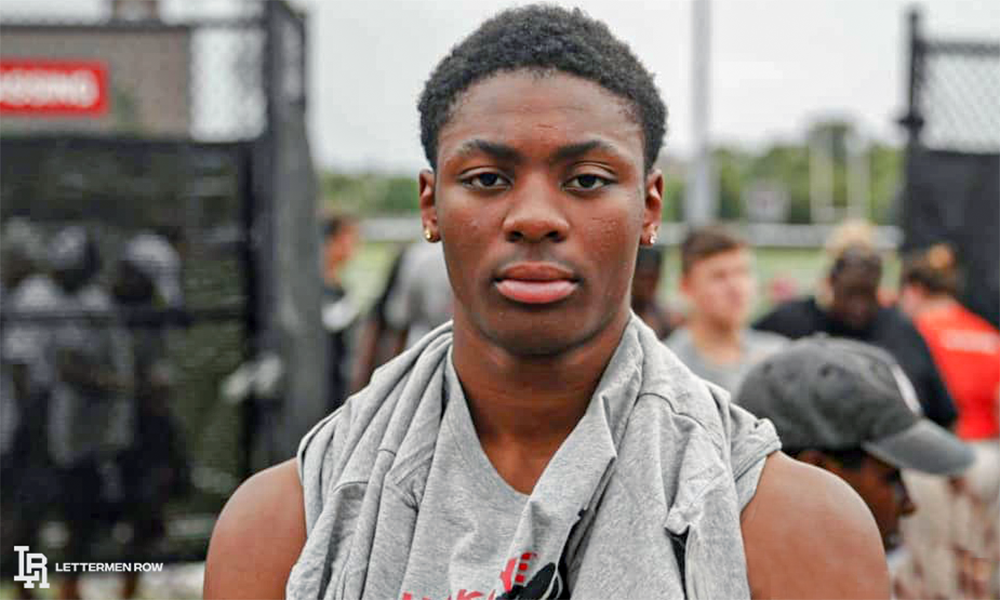 Derrick Davis was offered by Ohio State in 2018. (Birm/Lettermen Row)

Ohio State has been recruiting Derrick Davis for three years now and there’s no reason to think it’s going to slow down anytime soon. Penn State, Clemson, Georgia and others are fighting that longterm relationship and trying to convince Davis that the Buckeyes aren’t going to have room for him in the defensive backfield because Ohio State has five commitments there already and is still pursuing cornerbacks like Davies and Arizona’s Denzel Burke as well. What makes Davis a great fit for the Buckeyes is his versatility and his personality. He can play multiple positions and could potentially grow into a linebacker making him the right kind of candidate to play the bullet position a la Pete Werner.