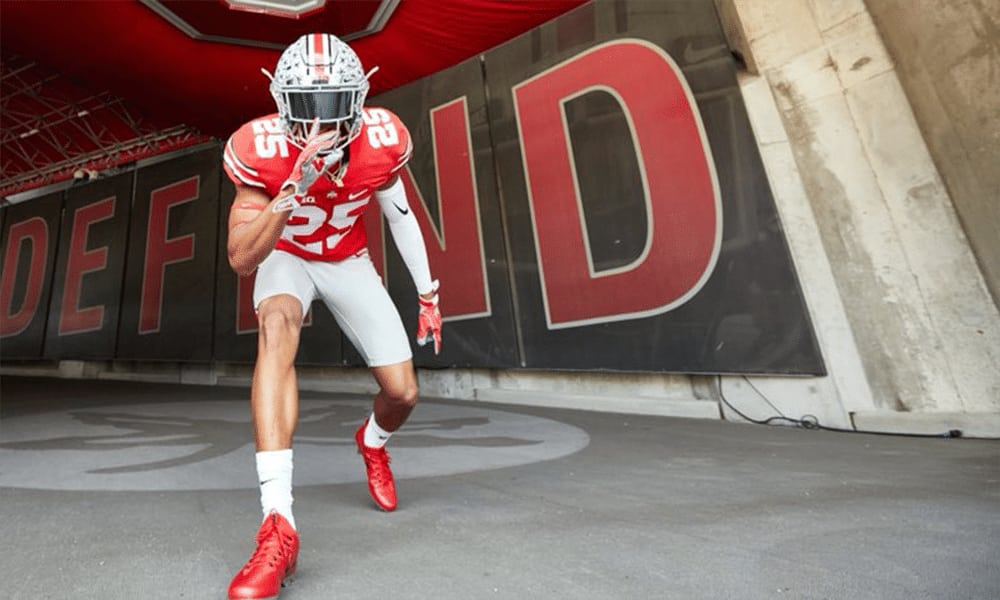 Is Ohio State closing in on commitment from Peyton Powell?

There were a number of highly-recruited 2019 prospects that made official visits to Ohio State last weekend, and so far that group has yielded one commitment. But another could be on the verge of coming soon.

Peyton Powell, a 3-star athlete from Odessa (Texas) Permian High School, is a quarterback in high school but is being recruited by the Buckeyes as a cornerback. And he loved everything about his recent visit to Columbus.

“I really liked it up there,” Powell, 6-foot-2 and 185-pounds, told Lettermen Row. “Just the atmosphere in the whole city, and how well the coaching staff and players meshed. I liked all the coaches. They were all cool, and they were straight up.”

Powell has offers from Texas, Baylor, Oklahoma State, Arkansas and about 15 others. But each program sees him as a different type of fit — some at offense, some on defense.

The Buckeyes are recruiting him as a cornerback, and if that ends up being his college choice, he’s confident they’ll turn him into the best cornerback he can be. His 4.4 speed and almost 38-inch vertical leap are excellent starting points.

“I trust their ability to develop me at whatever position they see me fit best,” he said. “Just because of their past player development, they’re the best at it.”

There’s no timeline for a decision, but Powell has an outline for making one.

“Ohio State is definitely top 3,” he said. “I’ll try to take one more official before I make my commitment. TCU or Oklahoma State, maybe.”

One of the country’s hottest 2020 prospects this past spring made his first visit to Ohio State last weekend as well. Rylie Mills is a 6-foot-5, 265-pound defensive end from Lake Forest (Ill.) who the Buckeyes hosted last Saturday.

“It was great getting up to the Ohio State to check out the campus and facilities,” Mills told Lettermen Row. “I really liked the coaches there. It seemed like they all had good chemistry.

“I got to learn a lot about their culture and the school, which was something I wanted to learn more about.”

Ohio State was one of more than a dozen schools to offer Mills, the country’s ninth-ranked 2020 strong-side defensive end, during the spring. He’s previously visited Notre Dame and the only current 247Sports.com crystal ball prediction is in favor of the Irish.  For Ohio State and for Mills, this visit was a chance to size the other up in person.

“It was great getting to meet [Urban] Meyer,” he said. “I like how easy it was to talk to him. He showed his interest in me and where he saw me fitting into the program.

If the Buckeyes are going to topple a program like Notre Dame for Mills, they’ll be required to showcase more than just the school’s football acumen. Mills’ father was on the visit with him and left impressed by Ohio State as a school.

“My dad was impressed by how much they value their academics, and I was impressed by their resources and different options they had for majors,” he said. “[My dad] liked the way the coaches kept players in line and how they felt about missed classes, being late, etc. He was also really impressed with the coaches and the facilities.”

There’s a long time left in the recruitment of Mills, who spent a portion of the day on Saturday being escorted by Ohio State freshman offensive tackle Max Wray. Wray’s younger brother, Jake, is one of two Buckeyes verbals in the Class of 2020. Overall, the Buckeyes left a big-time impression on a big-time prospect.

“I would say that now I’m still in the process of learning about schools,” Mills said. “But I think it was great to see [Ohio State] because I haven’t been there before. It’s a very impressive place and I had a great time meeting Coach Meyer and Coach Johnson. Hopefully we’ll be getting to a game there this season.”

What’s next for Darvon Hubbard?

In case you missed it on Tuesday, Ohio State offered 2020 Scottsdale (Ariz.) Chaparral running back Darvon Hubbard. Hubbard, originally from Akron, was at Ohio State twice in the last two weeks for camps with the Buckeyes. The common thought amongst the recruiting world is that he’s like to end his recruitment soon because he’s been waiting for that Ohio State offer for some time now.

Heck, even Hubbard’s family wants him to commit to the Buckeyes right away.

“My dad wants me to commit already,” Hubbard joked to Lettermen Row. “It’s a crazy experience. Just looking back and saying I can play for my hometown team.”

Even though he’s only a rising-junior, there are some schools out there that offered Hubbard before Ohio State, and they’re definitely going to try to point to that early interest as a recruiting tactic. Hubbard though, isn’t at all bothered by the timing of the Ohio State offer.

“I don’t feel hurt at all [by the timing],” he said. “I just knew I was going to get it sooner or later. I mean I’m just about to be a junior and I have all these huge offers that came very early.”

Two of those huge offers are from LSU and Georgia, and those are two places the 6-foot, 200-pound Hubbard says he wants to see before he makes a college decision.

“I just want to go visit more schools and then attack it that way,” he said. “I really want to visit Georgia. That’s No. 1 as far as schools to go see, them and LSU.”