Connect with us
Quinn Ewers is the highest-ranked recruit to ever commit to Ohio State; can the Buckeyes keep him in their 2022 class? (Quinn Ewers/Twitter)

The question the Buckeyes have is whether or not he’ll be taking anyone from the Woody Hayes Athletic Center with him.

A handful of Meyer’s former assistants are still working for Ryan Day and the Buckeyes, and there are legitimate concerns being harbored by Ohio State about the three-time national championship coach and his desire to poach some folks he’s worked with in the past. On-field coaches are one concern, of course, but it’s the support staff Meyer brought to Columbus — namely Mick Marotti, Mark Pantoni, Ryan Stamper and Brian Voltolini — that has been the backbone of his previous successes.

Meyer had college opportunities, including the chance to take over for Tom Herman at Texas. But he opted against that, with a number of people suggesting his concerns about his legacy in Columbus would be affected by it. Those concerns are somewhat mitigated with an NFL future but would likely still take a substantial blow if he makes too much noise picking off Day’s current staff. 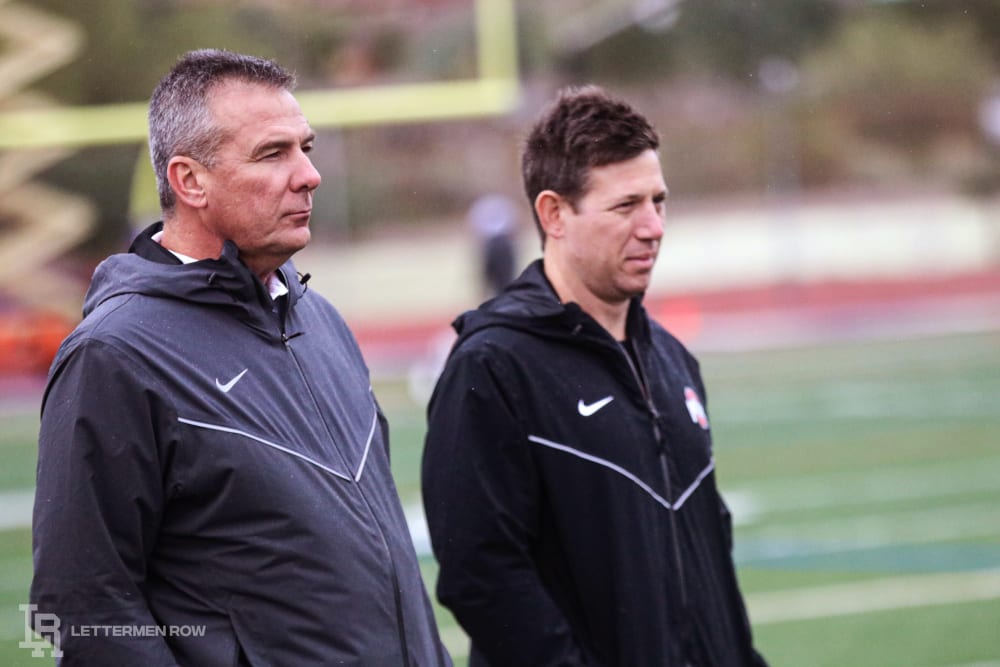 Urban Meyer and Mark Pantoni have a long working history together at Ohio State. (Birm/Lettermen Row)

While those concerns are being addressed, Ryan Day and Ohio State also have to spend some time worrying about the guy that did take Tom Herman’s job in Austin, Steve Sarkisian. Fresh off a dazzling play-calling performance against the Buckeyes in the national title game, Sarkisian is putting together a big-time staff full of Alabama staffers, and their immediate focus is going to be how to wall off Texas from other programs like Ohio State.

That means finding a way to convince former Longhorns quarterback commit and current 2022 Buckeyes verbal Quinn Ewers that he needs to come back into the fold for Texas. Those efforts are going to be immediate and extensive.

How will Ohio State approach that? Should the Buckeyes be truly concerned? Lettermen Row recruiting analyst Jeremy Birmingham and co-host Spencer Holbrook address those things and more in the latest edition of Talking Stuff, the Ohio State recruiting podcast.