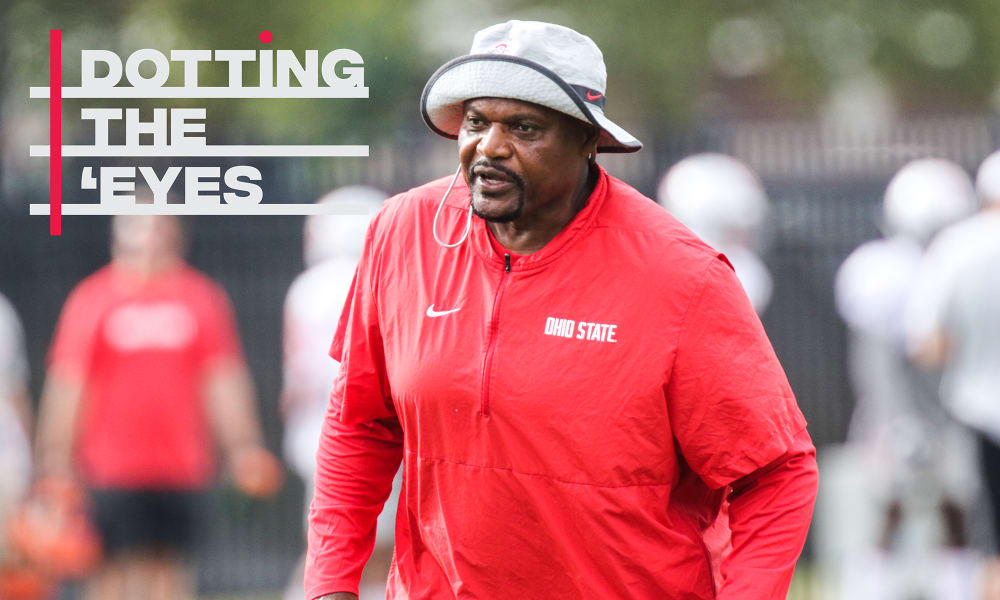 Ohio State assistant Larry Johnson is still looking for another pair of defensive linemen in the Class of 2020. (Birm/Lettermen Row)

Stay in touch or be left out because Ohio State recruiting is a 24-hour, seven-day-per-week obsession. What’s the latest news as the Buckeyes build for the future? Get that and more Sunday through Thursday on Lettermen Row. Monday’s notebook takes a look at a new offer for a 2021 tailback and discusses the Buckeyes defensive line recruiting.

It’s almost time for the Class of 2021 to take centerstage for Ohio State.

The Buckeyes are pretty close to finished with their 2020 class, and as the calendar hits September, the onus turns to evaluating and recruiting the country’s best junior prospects.

Though contact is hard to come by right now, there are still some players with enough game film to warrant an early scholarship offer. On Sunday, one such player earned an offer from Ohio State.

That is South Carolina 2021 commitment Lovasea Carroll, a 6-foot-1, 180-pound athlete who hails from Warrenton (Ga.) but now lines up at running back for the IMG Academy. Carroll, the country’s eighth-ranked junior tailback, issued a verbal commitment to the Gamecocks back in April, but he has visited Auburn since and is still looking at programs like Georgia as well.

Ohio State has been somewhat picky to this point when it comes to 2021 running backs. But as options dwindle in the 2020 cycle, expect to see an uptick in who is being offered in next year’s recruiting class.

Ohio State hosted 4-star defensive lineman Jay Hardy for a one-day visit in June, a trip that intersected with a majority of the program’s biggest official visitors during a crowded summer weekend.

Since that trip, the country’s fifth-ranked strongside defensive has stayed quiet. But a few days ago he released a top-five list as he looks to schedule official visits during the season. Ohio State is not on it.

It’s always a bit of system shock when the Buckeyes don’t make a list — especially when a player has been to campus. But this isn’t something that is viewed as a real negative in Columbus. There was not much in the way of a relationship formed between the Buckeyes and the 6-foot-5, 290-pound Hardy during or after his visit, so it’s not surprising to see both sides moving on.

What are Buckeyes doing along defensive line?

So, with Hardy off the board and the Buckeyes no longer in the running for North Carolina 5-star prospect Desmond Evans, where are they going to turn on the defensive line in 2020?

That’s becoming as important of a question as any remaining in this recruiting cycle, but there do not appear to be any obvious answers in play. Larry Johnson is one of the country’s most patient recruiters, and most of the work he’s doing on the recruiting trail stays silent because he handles himself meticulously and privately. That being the case, the names to know aren’t really out there publicly, and that’s why it’s so important to pay close attention to who actually visits Columbus this season and when they do it.

Last season, when Jaden McKenzie visited the Buckeyes in late November, most that cover Ohio State recruiting hadn’t even heard of him. Nobody believed or expected that he’d leave North Carolina for school, and yet three weeks later he was signing with Ohio State. That’s the way Johnson works, building relationships quietly with kids and their families and not being worried about stars or publicity.

The Buckeyes are hoping to find two more defensive linemen in the Class of 2020, and a couple of the guys who remain on the board like Jacolbe Cowan and Tyler Baron have been talked about previously. The other names are going to pop over the next month or two.