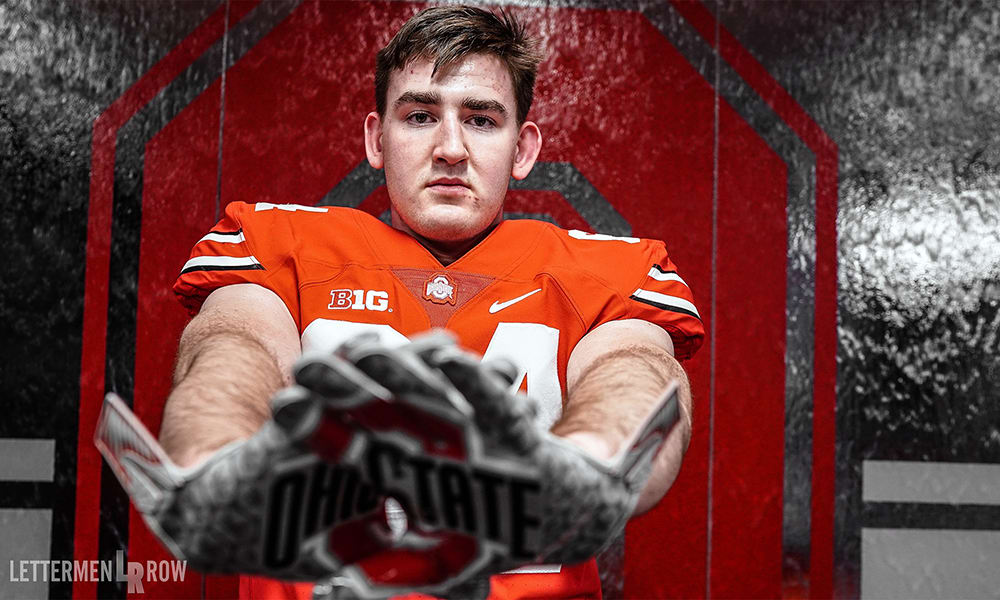 Stay in touch or be left out because Ohio State recruiting is a 24-hour, seven-day-per-week obsession. What’s the latest news as the Buckeyes build for the future? Get that and more Sunday through Thursday on Lettermen Row, including tonight’s update on Ole Miss commit Nick Broeker and the Buckeyes recruitment of Michigan standout Cameron Martinez.

Ohio State hosted the player who may be its final option in offensive line recruiting in the 2019 cycle for an official visit over the last two days. Nick Broeker, a 3-star lineman from Springfield (Ill.) Sacred Heart Griffin, told Lettermen Row that his visit was everything he’d expected it to be.

“It was pretty impressive for sure,” Broeker said. “Just the overall size of Columbus and how organized the program is in general.

“I’ve not seen anything like that at schools. It was to the exact minute and nothing ran late or ended early.”

There’s a machine in place at Ohio State, and it’s not lost on Broeker how rare it is to be courted by a program of that nature.

“It does [feel different], for sure,” Broeker said. “Because of how successful the program is and how high the level is that they compete.”

The 6-foot-6, 290-pound Broeker spent most of his visit with linemen Gavin Cupp, Josh Myers and Max Wray. He called the Buckeyes “great guys,” but the biggest adjustment he’d need to make if he picked the program was to the size and overall scope of the school and the city. He’s not concerned by the recent coaching change though.

“I feel very confident (with Ryan Day),” he said. “Nothing will change in the program. He’s been around it and understands how to win. ”

From here, Broeker needs to make a final decision. It’s not going to be easy as he compares two places and two programs that are entirely different. A final call will come without much fanfare and as the result of a family discussion over the next week-plus.

“It’s going to come down to how overall comfortable I feel with the coaches and the school,” he said. “I am going to talk about it with my parents and coaches and go from there.

“I’ll more than likely just sign [somewhere] the day of.”

About a month ago, we talked about Muskegon (Mich.) 2020 star Cameron Martinez and how he wanted to hear from Ohio State again after losing touch when Kerry Coombs departed the program.

Shortly after that Dotting the ‘Eyes, Martinez did get back in touch with the Buckeyes, specifically cornerbacks coach Taver Johnson. On Monday, Johnson made his first stop at Muskegon to see the 5-foot-11, 180-pound two-way star.

“Coach Taver came into the school,” Martinez told Lettermen Row. “He just that he wanted to let me know that it was serious with them recruiting me and that he wants to talk to my mom tomorrow. He talked with my coach for a while and watched some of my basketball practice.

“He told my coach that he likes me a lot and was really impressed by film, but he didn’t know I was that solid as I was in person. He likes me on defense but he thinks I’m athletic enough to play anywhere. He’s going to show me to the head man when they all get back from the road I believe.”

With an offer from Michigan, Martinez isn’t an under-the-radar kid by any measure. But he was worried that Urban Meyer’s departure could lead to losing touch with the Buckeyes again. He’s hopeful that Ryan Day likes what he shows on film.

“I’ve heard really good things about Day,” he said. “I hope he approves of what he sees.”

If you’re looking for more evidence that Mekhail Sherman, Rakim Jarrett and Tre Williams — three of the country’s top 60 prospects in the Class of 2020 and teammates at St. John’s College (Washington D.C.) — are a major priority for Ohio State, here’s some.

On Monday, we told you that linebackers coach Bill Davis was in the building to see the 5-star linebacker Sherman, but he was just one of three Buckeyes assistants who made the trip.

According to sources close to the school, Davis was joined on that visit by receivers coach Brian Hartline and defensive coordinator Greg Schiano. The Ohio State coaches are no doubt aware they’re in a great position with the talented trio and want to make sure that group knows there’s been no shift in the priorities in 2020.

As of 4 p.m. on Tuesday, here’s where things seem to stand with the Buckeyes and their current crop of 2019 and 2020 commitments.