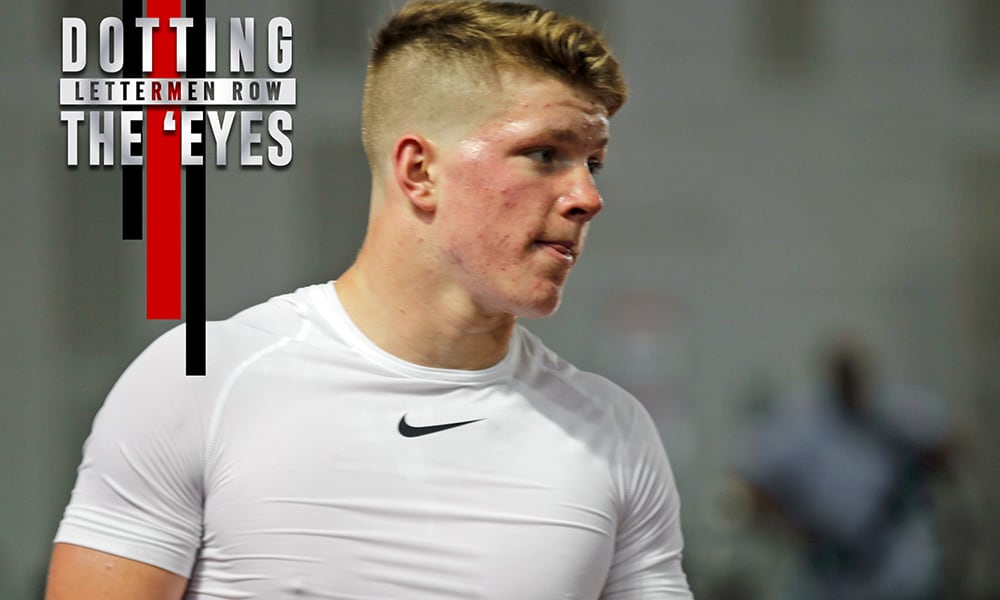 Stay in touch or be left out because Ohio State recruiting is a 24-hour, seven-day-per-week obsession. What’s the latest news as the Buckeyes build for the future? Get that and more Sunday through Thursday on Lettermen Row. Today’s update talks about a new in-state offer to a rising-sophomore and a trio of Philadelphia’s best prospects heading to campus this weekend.

The offer was first reported by Bucknuts.com’s Bill Greene, who also reported that the 6-foot-4, 235-pound Story will visit Ohio State this coming weekend as one of the rising number of in-state targets set to be on campus in Columbus.

Story visited the Buckeyes in December for a bowl-prep practice and was at Michigan for a junior day with the Wolverines last weekend. He’ll be one of two in-state sophomore defensive ends in Columbus, joining Pickerington North’s Jack Sawyer, who will return for another visit with Ohio State though he’ll only be on campus early Saturday due to a basketball game scheduled for 2:30 p.m. that afternoon.

Stay on top of the weekend’s visitors here on the Lettermen Row forums.

The final push for offensive linemen in the Class of 2019 is nearing its end. Earlier this week, Ryan Day and Greg Studrawa — along with Kevin Wilson — visited Dawand Jones and Doug Nester for the final time, using their in-home visit with the two offensive line targets. Today, Day is heading out of the frigid Midwest and is Hawai’i bound to see 4-star offensive guard Enokk Vimahi, who made an official visit to Ohio State last weekend.

The Buckeyes rarely recruit Hawai’i and the distance between Columbus and Kahuku is one reason: it’s about a 12-hour trip each way, to visit a player and his family for a couple of hours. If you need evidence of how important the country’s seventh-ranked offensive guard is to Ohio State at this point, that may be it.

Ohio State may be heading toward a commitment from Vimahi, especially as rumors that Oklahoma’s Lincoln Riley will not be able to make his own trip to Hawai’i, and if that’s true then it could be a two-team race between the Buckeyes and the USC Trojans for him. Whichever school ends up securing a signature from Vimahi next Wednesday will get just one year of playing time before he takes a two-year religious mission, however.

That is not deterring the Buckeyes. They believe the 6-foot-4, 270-pound lineman is a future NFL player and know he’d provide them a much needed boost of offensive line depth.

There will be some out-of-state prospects visiting Ohio State this weekend and that group will headlined — right now — by a trio of Philadelphis St. Joseph’s 2021 stars.

Kyle McCord is one of the country’s best young quarterbacks and says he’s eager to make his first trip to Ohio State.

“I’m really excited to see Ohio State for the first time,” McCord told Lettermen Row on Thursday morning. “Ohio State is definitely at the top of my list.”

The 6-foot-3, 195-pound quarterback will bring Marvin Harrison, Jr. and Jeremiah Trotter, Jr. with him to Columbus. Harrison is the country’s second-ranked receiver sophomore receiver and Trotter is a fast-rising linebacker prospect with eight early offers. Both are the sons of long-time NFL veterans.

“[Ohio State] big-time football,” Trotter said about his interest in taking the trip this weekend. “I’d like to see this weekend what the campus is like and what the school is like and be able to meet the coaches in person. I’m confident it will fit me nicely. I’m excited.”

The Buckeyes are still in contact with Cambridge (Mass.) 2020 offensive lineman Zak Zinter. Offered by Ohio State in September, Zinter has family ties to the school (his grandmother is an alum) but has yet to make a trip to Ohio State. He says he hopes that is remedied sometime soon.

“I just haven’t had a chance to make a trip yet,” the country’s 19th-ranked tackle told Lettermen Row. “I’m trying to finalize my spring travel schedule but Ohio State is on the list to visit.”

Offered by Urban Meyer, Zinter has not seen any dropoff in communication with the Buckeyes since Ryan Day took over the program. He’s recently been in touch with Matt Barnes and Day was expected to see him on Wednesday but weather stopped that trip from happening.

“Coach Day and I text just about every other day, sometimes every day,” Zinter said. “I also have connected well with [Ohio State director of player personnel Mark] Pantoni and Coach Barnes. Coach Barnes has been out to my school twice in the last 2 weeks.

“[Barnes] is great. We’ve talked mostly about getting to know each other, he’s talked a lot about ‘why Ohio State’ and how I can make an impact there. At school it’s only a handshake and nothing more. They follow the rules really well, so most of it is through texts and phone calls.”

As for Day? Zinter has been impressed by how he’s handled the transition.

“I think he’s done an awesome job,” he added. “Coach Day is the first one to contact me when he was sitting in for Meyer, so it hasn’t changed my thoughts about Ohio State at all. I actually was excited for him when he was announced as the new coach because we had already built a relationship.”

Now the Buckeyes just need to get the 6-foot-6, 300-pound tackle on campus.