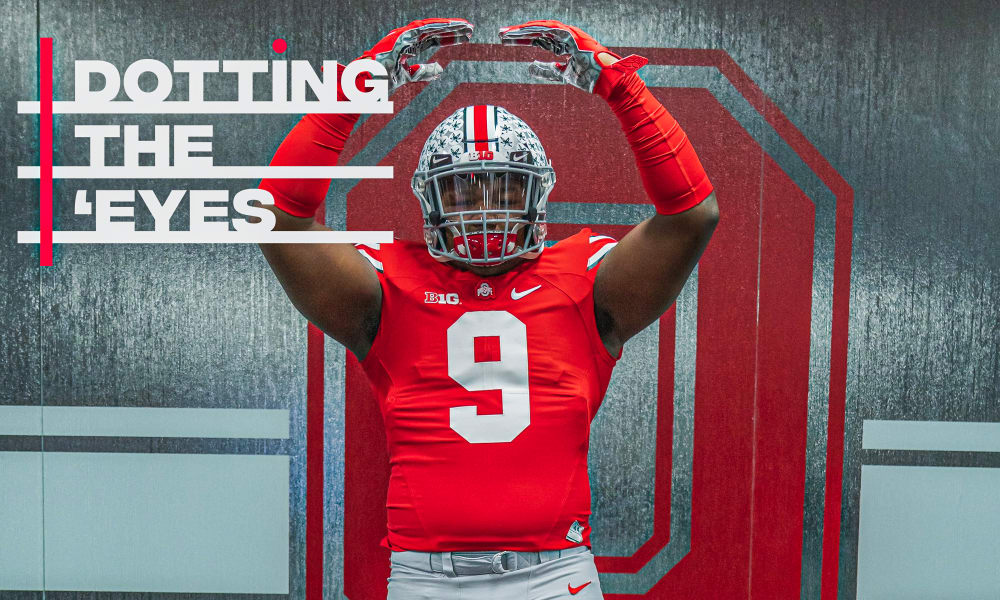 Stay in touch or be left out because Ohio State recruiting is a 24-hour, seven-day-per-week obsession. What’s the latest news as the Buckeyes build for the future? Get that and more Sunday through Thursday on Lettermen Row. Sunday, we look at the recruiting dead period that runs through February and examines the impact of Streetsboro defensive tackle Michael Hall committing to Ohio State.

The Buckeyes picked up commitment No. 10 in the Class of 2021 on Saturday afternoon when Mike Hall, Jr., a 4-star defensive tackle from Streetsboro, committed to Ryan Day and Ohio State.

Hall, 6-foot-3 and 290-pounds, committed during an afternoon visit to the school. The Buckeyes hosted a handful of select prospects from the Columbus, Cleveland and Pittsburgh areas — and the in-state lineman was among the group that checked out the school with the Ohio State and Indiana basketball game serving as the backdrop for the afternoon.

It’s not surprising that Hall committed to Ohio State. The Buckeyes have been the publicly stated leader for months, but after saying two weeks ago that he was hoping to visit schools like Penn State, Georgia and others, the timing may have caught folks a little off guard.

The Buckeyes absolutely prioritized Hall after seeing the film from early in his junior season and offered him in late October. Day and Larry Johnson had been in contact nearly every day since, leaving no doubt that the state’s ninth-ranked junior was a top target for them.

Now that Hall is committed, the Buckeyes are likely to start turning their focus to securing their primary out-of-state targets in this cycle. Six of the 10 Ohio State verbals in 2021 are from Ohio, and those six are all blue-chip talents. Yes, there are other in-state prospects who have been offered like Najee Story, Corey Kiner and A.J. Kirk. But there’s no real push from the Buckeyes for their commitments yet — and that absolutely wasn’t the case for Jack Sawyer, Jayden Ballard, Ben Christman, Reid Carrico, Jaylen Johnson and Hall.

That six-man group will serve as a welcoming committee for top targets all over the country who will make their way to Columbus throughout the spring and summer. And they will be pivotal as Ohio State drives toward another top-five recruiting class.

Monday morning will bring a recruiting dead period for the rest of February, and that provides the Buckeyes and the rest of their Big Ten brethren a chance to take advantage of a more level playing field this time of year than they’d been able to the last few years.

I asked one source close to Ohio State recruiting if they liked the new, month-long winter dead period and was told that “like may not be a strong enough word.” That’s all Lettermen Row needed to hear.

As we’ve written here in the past, there are not many areas or times when the Buckeyes are at a recruiting disadvantage. But in the last few recruiting cycles, they have undeniably fallen behind on major targets who couldn’t make visits to Ohio at this time of the year. Whether that was because of weather or finances, Ohio State targets were consistently choosing to make visits to southern schools in January and February, and in doing so accelerated relationships that the Buckeyes didn’t get a chance to build.

Now with everyone in the same proverbial boat, the month of February will be used by Day and Ohio State the same way that it will be used by everyone else. The Buckeyes goal for the month is simple, and now achieving it without losing ground to other schools is much easier to accomplish.

The Buckeyes wrapped up the recruiting contact period this weekend, and it should be no surprise that Ryan Day was on the road seeing top priorities over the last week. But he finished his week in Florida.

Day and receivers coach Brian Hartline were in South Florida on Friday, seeing Troy Stellato and Cardinal Gibbons High School and also checking in on St. Thomas Aquinas while they were in the Fort Lauderdale area. Hartline left Florida and headed north to Michigan, where he and Kerry Coombs watched Cameron Martinez play basketball Friday night. Day, though, went to Bradenton to meet with Bobby Acosta, the new coach at the IMG Academy.

While at IMG, Day offered Florida commit Kamar Wilcoxson and also caught up with recent IMG transfer Tunmise Adeleye, who announced he was leaving Katy (Texas) Tompkins High School just about two weeks ago. Both Wilcoxson and Adeleye told Lettermen Row that they are in the process of setting up a March visit to Columbus.

releases get making use of but rather your ex had become lampooned by way of many when it comes to it’s “yell” (otherwise known as i have a howl spiel) correct reducing in IOWA CAUCUS if you are each of the thought possible he would have been a athletic shoe in. although, the primary dems plonked your ex boyfriend to qualify for the baby wolves basically because they regarded Kerry would be likely to stop the war fear a great deal better contemplating Kerry functioned (for certain) with Vietnam. rather then Dubya which are gained a deferment to the nation’s defend. difficult proposal. we ended up 4 way more years of the most popular nuckle thoughts here in our team who which one could make Howard Dean resemble a fin. to all fairness it looks Howard Dean was in fact right. But with regard to your own personal YouTube time period you have YouTube. : )The awesome $9 trillion uncouth indigenous credit rating card debt has been to be paid while using “all round fund, this is the facet funded simply by all of my taxes. Half of their is true of within the armed forces so to pay their… Read more »

Analyzing impact of Michael Hall committing to Buckeyes
Mike Hall on decision to commit to Buckeyes, plans as a recruiter
Advertisement