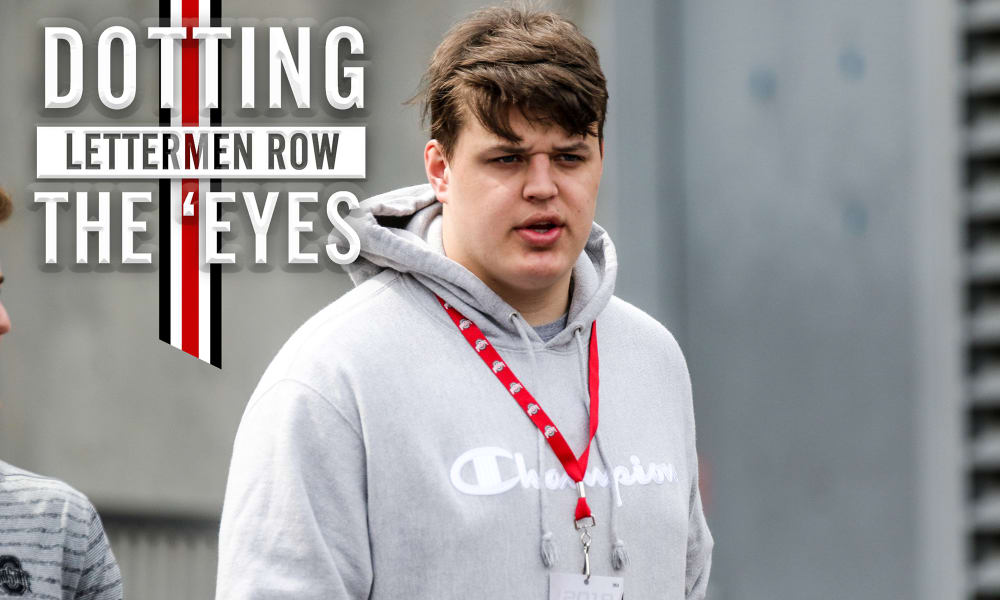 Michael Carmody is a major priority for the Buckeyes in the Class of 2020. (Birm/Lettermen Row)

Stay in touch or be left out because Ohio State recruiting is a 24-hour, seven-day-per-week obsession. What’s the latest news as the Buckeyes build for the future? Get that and more Sunday through Thursday on Lettermen Row. Today’s update looks at the recruitment of Pennsylvania’s Michael Carmody, a pair of new offers in the Class of 2020 and Jordan Morant’s rescheduled Buckeyes visit.

Where are things with Michael Carmody and Ohio State?

Throughout most of the week we’ve talked about the myriad 2021 visitors in town for the Buckeyes spring game last weekend and not yet delved too deeply into the 2020 class and the key prospects who were in attendance. One of those key visitors was Mars (Pa.) Area High School 4-star offensive lineman Michael Carmody, a player who has quickly emerged as one of Ohio State’s top remaining targets.

Carmody made the trip to Ohio State on Saturday rather than visiting Penn State for its spring game, a decision which he said last week was more perfunctory than emotional. He went to Penn State’s spring game last year, so it made sense to visit Ohio State’s this year. But it’s still worth noting when trying to assess where his recruitment is right now and where it could be heading. He was in Columbus just three weeks earlier, and his growing relationship with the Buckeyes appears to be a driving force as he heads to what should be a summertime decision. 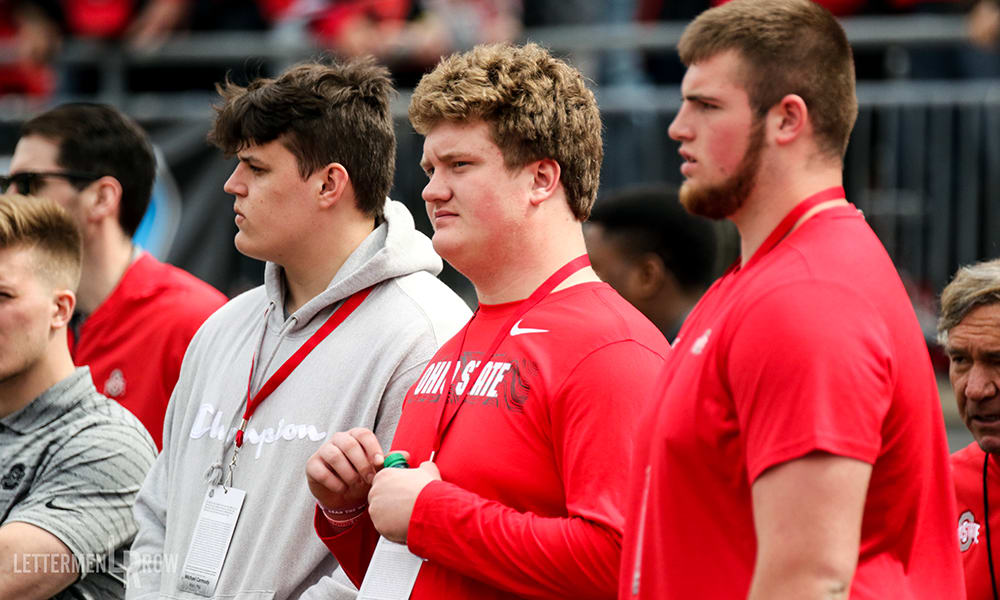 On Saturday, Carmody spent time talking with Jakob James and Trey Leroux, but the majority of the day after that was spent with Ryan Day and Greg Studrawa as the Buckeyes are employing an all-hands-on-deck approach with the 6-foot-6, 285-pound lineman. Day’s personal involvement with Carmody is worth noting as well, since it was his influence that turned the tide on the recruitment of Harry Miller, Enokk Vimahi and Dawand Jones in the previous cycle.

As of now, it appears there is a three-team race for Carmody with Virginia Tech and Penn State as the primary threats to Ohio State. But according to people I’ve spoken with, it’s the Hokies who are the bigger threat moving forward and not the Nittany Lions as many would expect. I’m not going to suggest that Penn State is out of the picture by any measure.

Ohio State will hope to get Carmody back on campus again in the next month or two for an official visit with the aim of sealing the deal on his recruitment then.

The Buckeyes continue to try to lock down Ohio’s best players, and to that end they offered one of the state’s rising 2020 stars on Wednesday night. That is Westerville Central 3-star safety Rickey Hyatt.

Blessed to have received my 21st D1 offer from The Ohio State University!!!🔴⚪️ pic.twitter.com/tibVzEhzc3

Despite his current 3-star status, I expect that you’ll see the 6-foot-2, 190-pound Hyatt receive a rating bump in the near future that will push him over the 4-star threshold.

Hyatt is a big, rangy defensive back prospect who runs a laser-timed 4.68 in the 4o-yard dash, and that’s plenty fast for a young player who hasn’t been trained yet at the elite level that he will be in college.

I’d expect Hyatt to work into the Buckeyes 2020 recruiting class and see him as another player that’s an excellent fit in the Bullet position that is being developed at Ohio State. That said, there’s no timeline for a decision and believe this could stretch into the early summer months.

I AM BLESSED AND GRATEFUL TO HAVE RECEIVED AN OFFER FROM THE OHIO STATE UNIVERSITY❗️❕ #BLESSED pic.twitter.com/FzEs21rnbi

The country’s sixth-ranked athlete and top-ranked player in Utah, Sewell was offered by Ohio State linebackers coach Al Washington. The 6-foot-2, 260-pound linebacker has been in communication with Washington for a while now and told Lettermen Row he’s working with his parents on setting up a potential visit to Columbus.

Ohio State’s linebacker recruiting is a little hard to follow this year because of the aforementioned Bullet position, which makes it a bit harder to discern where people fit into the defensive scheme. Sewell becomes the fifth middle linebacker-type in the class of 2020 to land an offer, a list that includes Justin Flowe, a 5-star prospect from California who included Ohio State on a top schools list that he released on Wednesday night.

Unless Sewell — or Flowe for that matter — visits Ohio State, this likely goes down as just a wasted offer for the Buckeyes.

For the second time in a month, Bergen Catholic (Oradell, N.J.) 4-star safety Jordan Morant has rescheduled a visit to Ohio State. The country’s top-ranked safety according to 247Sports.com, Morant was expected in Columbus on the first weekend of April but had some family matters come up that prevented the visit from happening.

Now he says he’ll be in Columbus next Monday.

“I’m going to Notre Dame [Wednesday] and Michigan on Thursday,” Morant told Lettermen Row on Tuesday night. “Then Ohio State next Monday. I’m going to be staying out in Ohio over the weekend.”

This trip is pivotal for Morant, who continues to have sincere interest in the trip of Midwest powers.

Ohio State in solid position in recruiting race for Kendall Milton
Relationship with Ohio State, Rakim Jarrett has been put to test