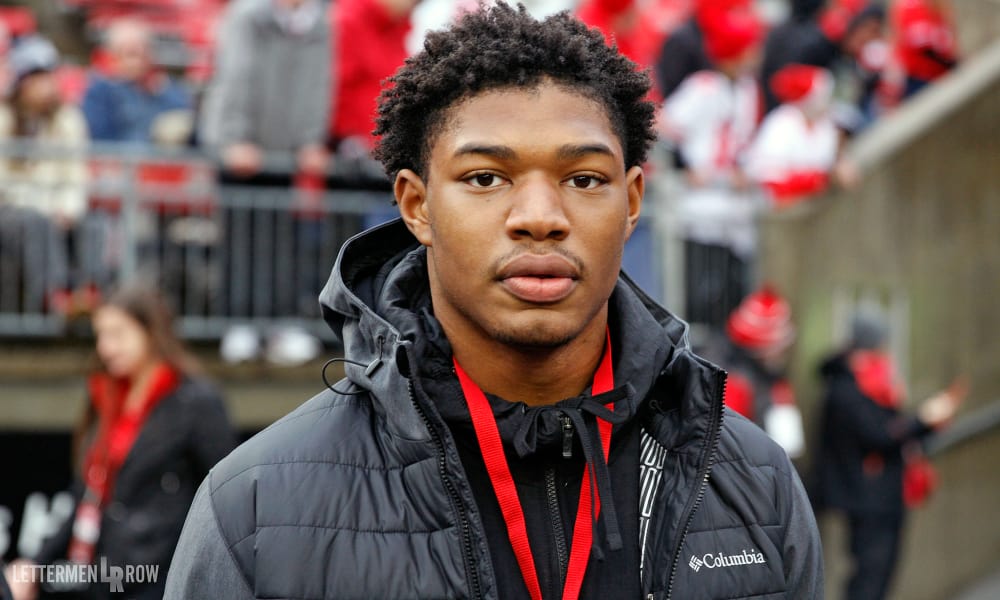 Mekhail Sherman once again had a great visit to Ohio State. (Birm/Lettermen Row)

Stay in touch or be left out because Ohio State recruiting is a 24-hour, seven-day-per-week obsession. What’s the latest news as the Buckeyes build for the future? Get that and more Sunday through Thursday on Lettermen Row, including updates on Mekhail Sherman, Rakim Jarrett and others from Ohio State’s mega-recruiting weekend.

There were dozens of major visitors for Ohio State this weekend against Michigan, but for my money, the most important among them made the trip from Washington D.C. to Columbus. On Friday afternoon, St. John’s College High School prospects Mekhail Sherman, Rakim Jarrett and Tre Williams arrived at Ohio State.

Sherman is the highest-ranked of that priority group and a consensus 5-star linebacker prospect. He’s a player that has made a serious connection with Urban Meyer over the last few months, and he’s not hiding the fact that the Buckeyes are at the top of his list right now, even if he’s not telling which other school they’re fighting the most.

“This visit has them in my top two,” Sherman told Lettermen Row. “My weekend went great, I just have one takeaway: The Ohio State defense most definitely showed out. Malik Harrison and those big boys up front put on a show.”

It’s clearly key for the Buckeyes chances here that the linebacker unit has to be an elite group. They’ve been up and down, at least compared to Ohio State standards. But Sherman was watching the game not as a fan, but more from a player’s perspective — and that changes what he sees.

“They always been an excellent group of run-stopping linebackers,” he said. “The only thing they need to work on was on the pass drops and the crossing routes, but they eliminated that in the game. The linebackers do a lot of dirty work that a lot of people don’t see. I definitely saw that during the game.”

Aside from the game atmosphere, which Sherman called “electric,” the biggest part of the weekend for him was the opportunity to get closer to a tight-knit group of 2020 commits. Jack Miller, Lejond Cavazos, Jake Wray and Paris Johnson were with him, strengthening what’s already a very close bond between that group and his St. John’s College teammates.

“It great hanging out with those guys,” he said. “It’s crazy because there’s so much talent in that pack, even excluding me. It’s nice to have a bond with those guys.”

There’s no timeline for a decision from the 6-foot-3, 230-pound linebacker, but he does want to get back to Ohio State soon for a very specific reason.

“I’ll come back in the spring or the summer,” he said. “I need to bring my family up next time.”

As mentioned, wide receiver Rakim Jarrett also visited Ohio State this weekend, and it couldn’t have gone better for the program. The country’s sixth-ranked receiver in the Class of 2020 continues to be comfortable in Columbus.

“It went very well,” Jarrett said. “It did feel like home. It kind of reminds me of my high school,  just the feel and vibe throughout the college, but ten times more.

“It was great overall. Buckeye Nation is crazy. It was a great atmosphere, and I loved how they were throwing the ball around and seeing true freshman getting in there and playing.”

Rakim Jarrett said he may have committed to Ohio State if his mother had made the trip with him. (Birm/Lettermen Row)

“Hartline is much more involved with me than any other receivers coaches,” he said.

Ohio State and Jarrett had hoped his mother would be able to accompany him for this trip, but she wasn’t able to attend. That means the waiting game for a potential commitment continues.

“Mom couldn’t make it,” he said. “It might’ve been a done deal if she would’ve came, but she didn’t so I’ll play the waiting game and go out and see some colleges. I’ll bring her up with me next time for sure.”

It was a huge weekend for the Buckeyes and a handful of in-state targets that have recently become important names for them on the recruiting trail.

First of all, Michigan State commit J.D. Duplain did visit the Buckeyes, choosing to show up on campus minus the fanfare. He met with the coaches on Saturday morning and continues to grow his relationship with the Ohio State staff, but there’s no imminent flip happening unless the Spartans decide to cut ties with him in light of the visit. Mark Dantonio has usually been pretty firm on his no-visit policy, but it appears the Spartans haven’t forced him out.

In some ways, I wonder if that would be Duplain’s preference, as it’d certainly make the decision to flip easier to make. Still, I think he will eventually end up committing to Ohio State, one way or another. I think it’s likely an official visit happens in the next few weeks as he continues to build a relationship with the Buckeyes coaching staff.

In fact, much of the same can be said for linebackers Tommy Eichenberg and Jestin Jacobs as well. There’s sometimes a sense that an offer should mean a commitment for in-state prospects that grew up dreaming of playing for the Buckeyes, but these trips are a good reminder that recruiting is almost always about comfort and relationships, as we preach here all the time. Ohio State has ground to make up for these players because they weren’t involved much early, but it is pushing and advancing and making an impact.

There’s no doubt that the play of the Ohio State linebackers made an impact on Saturday. But the biggest impact has to be made by Urban Meyer, Greg Schiano and Billy Davis. The Buckeyes have to prove that they’re invested in these kids and not just recruiting them out of desperation.

A majority of the remaining pieces of Ohio State’s 2019 class could be filled from this group, and this weekend is going to go a long way toward bringing each player into the mix. Lettermen Row is still working to get reactions from the players themselves, but there’s positive momentum being made according to multiple sources on the Ohio State side of things.

On Friday we went over the defensive tackle group making official visits to Ohio State over the weekend, a group of four that likely includes the one or two guys who could sign with the Buckeyes eventually.

Of that group, Toledo Whitmer’s Cavon Butler remains the most likely to end up at Ohio State. But I think it’s worth watching how the roster shakes out, because there seems to be a scenario where two guys are needed. That’s why I’ve remained so vocal about the possibility of a player like Owings Mills (Md.) McDonogh’s D’Von Ellies ending up at Ohio State. The Buckeyes have tried for months to get Wake Forest (N.C.) 3-star prospect Jaden McKenzie to campus, and he finally made it. But it seems highly unlikely that he’s going to leave North Carolina for college, so I think it’s fair to take him off the list.

That leaves Butler, Ellies and New York’s Jared Harrison-Hunte, all of whom made the trip to Columbus. The Buckeyes are fighting off Penn State for both Ellies and Harrison-Hunte, and from talking to people around Ohio State, it seems the best odds are with Butler and Ellies.

Butler isn’t going to make a public decision anytime soon. So if the Buckeyes are going to want just one, they may be forced to make a decision on exactly who they want to take soon.