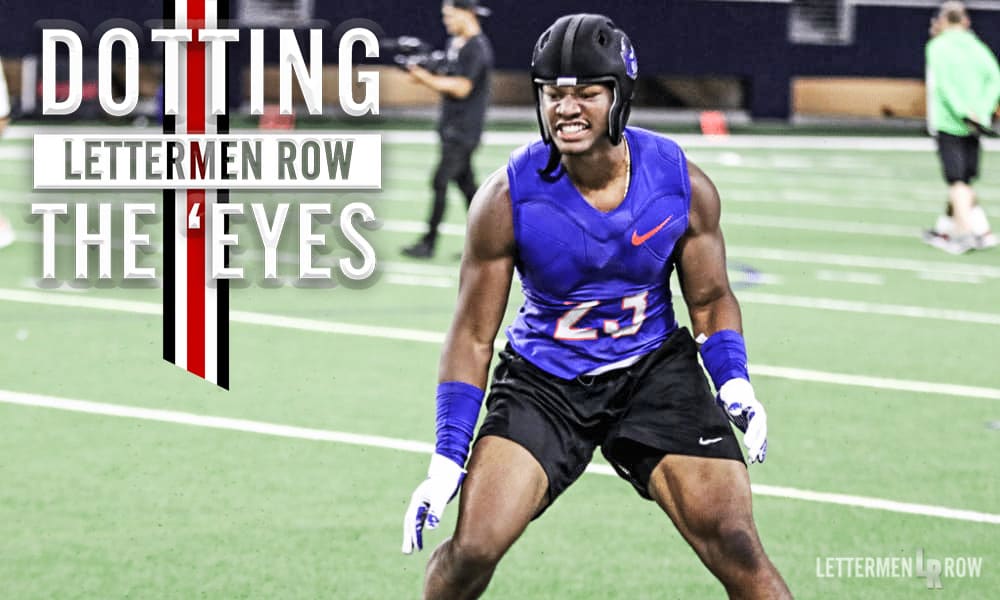 Stay in touch or be left out because Ohio State recruiting is a 24-hour, seven-day-per-week obsession. What’s the latest news as the Buckeyes build for the future? Get that and more Sunday through Thursday on Lettermen Row. Today, we talk about the latest developments in the recruitment of Mekhail Sherman and Rakim Jarrett, as well as an update on newly added quarterback JP Andrade.

Ohio State hosted 5-star linebacker Mekhail Sherman for an official visit this weekend as the Buckeyes hoped to begin changing the tenor of his recruitment and regain their one-time momentum, the momentum that has since shifted almost entirely to the Georgia Bulldogs.

Sherman, as you can see, arrived on Saturday morning in Columbus, making the trip with his sister and his future brother-in-law. The visit, scheduled to last through the day Sunday, actually ended early Sunday due to a mechanical issue with a flight that forced an earlier departure. I think it’s something that should be considered telling when it comes to where things are heading from here between Ohio State and the 5-star linebacker from Washington D.C.

Sometimes things change in recruiting and despite how close Sherman was to being a Buckeye months ago, it really doesn’t seem that’s going to happen from here. Expect the Ohio State staff to ramp up the recruiting efforts on other prospects from here.

…And Rakim Jarrett commits to LSU

Meanwhile, Sherman’s St. John’s College teammate Rakim Jarrett, a 5-star receiver prospect who was at one time considered a “sure thing” to the Buckeyes made an official visit to LSU this weekend and committed to the Tigers on his visit.

After announcing his commitment, Jarrett in a now deleted tweet, announced a farewell to all the “fake fans” and announced he’s had fun “trolling” them. It’s been clear for months that Jarrett’s recruitment was going to end up taking some wild twists and turns so a commitment to LSU this early isn’t really a surprise. I wrote about him last week and mentioned how difficult he’s been to cover for defensive backs and recruiting analysts in the past few months.

“But recruiting is about people and personal decisions,” we wrote. “For Ohio State and Rakim Jarrett, there’s been a disconnect in recent months. It’s impossible to describe it any other way.”

That disconnect was never going to be addressed and rectified if Jarrett himself didn’t take it upon himself to do it. The Buckeyes, as we wrote, we’re not going to continue chasing him if he didn’t. He’s a sensational football prospect no doubt but the relationship with Ohio State changed considerably as Jarrett’s recruitment expanded and there’s not much the Buckeyes can do about that until — if ever decides to — Jarrett changed his approach.

His family ties to Ohio, and a mother that would’ve preferred he play for Brian Hartline and the Buckeyes, haven’t been enough to create that change to this point. Is his recruitment 100-percent over? I suppose we’ll see what happens from here.

Why J.P. Andrade picked Ohio State as a preferred walk-on

Ohio State took one step toward addressing its quarterback situation for the future on Friday evening as Bonita (La Verne, Calif.) 3-star prospect J.P. Andrade accepted an opportunity to play for the Buckeyes as a preferred walk-on in 2019 and beyond.

The Buckeyes followed that up by adding graduate transfer Gunnar Hoak as the likely backup for the next two seasons. And by securing Andrade, that represents a winning scenario for Ohio State, which adds vital depth at quarterback by adding a talented player without putting him on scholarship.

Andrade, who turned down a similar opportunity to play at Florida, felt something at Ohio State during two spring visits to Columbus that just felt right. The departure of Matthew Baldwin from the Buckeyes didn’t necessarily push him over any sort of edge in a decision, either. It’s just what he wanted to do and where he wanted to be.

“After my two visits, Ohio State has been on my heart,” Andrade told Lettermen Row. “Not who is there and who is leaving or coming.

“I fell in love with Ohio State from the moment I stepped on campus. I loved the atmosphere, the coaches, and I know I can compete at a high level. There is no better time to step into a program like this. I got a call from [coach Ryan] Day, and they offered me a preferred walk-on spot. That’s the message I was waiting on and I had to jump on the opportunity that was put in front of me.”

It will be exactly one year from the first time he stepped on campus at Ohio State until Kedrick Bingley-Jones arrives in Columbus for an official visit with the Buckeyes.

1st Offical visit has been set to The Ohio State University‼️#GoBucks⭕️🌰 pic.twitter.com/ny7rrd9JRr

We’ve spoken about Bingley-Jones, a former Florida commitment, a handful of times. He’s the country’s 14th-ranked defensive tackle according to the 247Sports composite rankings and was offered by the Buckeyes last summer. He raved about the Ohio State coaching staff back then, and the contact between he and the Buckeyes has picked up recently.

“I’ll be at Ohio State on June 21-23,” he said. “We have just been talking for a while about when I would get back up there and when Larry Johnson will come to visit my school this spring. He’ll be down sometime next week.”

Bingley-Jones is a 6-foot-4, 265-pound lineman and has almost 25 scholarship offers.