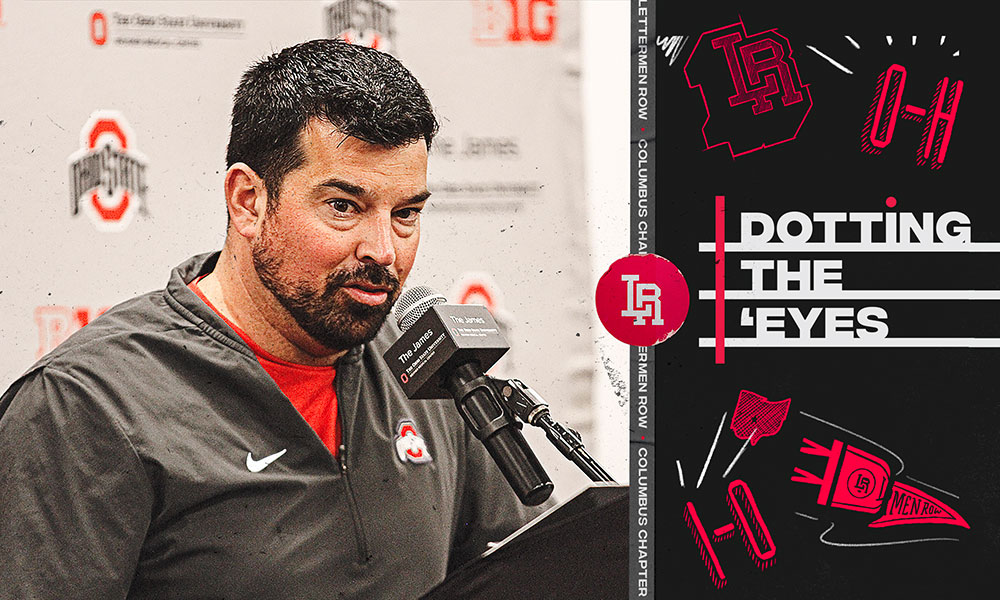 Ryan Day has his eyes on one of the country's best high school programs. (Birm/Lettermen Row)

Stay in touch or be left out because Ohio State recruiting is a 24-hour, seven-day-per-week obsession. What’s the latest news as the Buckeyes build for the future? Get that and more Sunday through Thursday on Lettermen Row. Monday’s notebook heads west and looks at the effort Ohio State is making in one of the country’s most talent-rich high schools.

It was almost a year ago when Ohio State offered 4-star California cornerback Jaylin Davies. And despite the excitement that came with that offer, the 6-foot-1, 185-pounder has yet to make his way across the country for a visit with the Buckeyes.

That was going to happen this month, but for obvious reasons, it didn’t. The Covid-19 pandemic hitting when it did left Davies feeling like he missed an opportunity a month ago when a number of California prep stars traveled around the country together — including a stop at Ohio State.

“Looking back, I should have gone,” Davies told Lettermen Row. “But I figured me and my uncle would be visiting in April, we had the flight booked and everything. It’s just my luck.”

Davies, from powerhouse Mater Dei in Santa Ana, had his first FaceTime meeting with Ryan Day last week as he and the Buckeyes continue to grow a relationship that he hopes will lead to a visit as soon he’s once again able.

“I’ve been talking to [Ohio State defensive coordinator] Kerry Coombs daily,” the country’s No. 11-ranked cornerback said. “We began to speak a lot before the virus stuff began. Coombs is funny and honest. If everything [at Ohio State] was what he and Coach Day said it was when I was supposed to visited, then I would have probably committed.

“Now I have to wait until this is over. When this is over, Ohio State will be my first visit, probably the first weekend they are allowed to have visitors.”

Arizona State, Texas, Washington and local schools like USC and UCLA are involved for Davies, as he looks for his future home. The preference is to leave the state of California for college, and because of that there’s no real need to hurry back to local campuses.

“I think I’d rather go to school out of state,” Davies said. “I’ve seen enough of our local schools, so nothing will change there. I know where I stand with them so I don’t need to make visits.”

A recent Buckeyes signee from California is among the reasons that Davies interest in the program has picked up.

“I hear about Ohio State mainly from C.J. Stroud,” Davies said. “We’re from the same city so that’s the homey. Two weeks ago we held our own workout, and he was telling me that I’d fit in well there and a couple of [the Buckeyes] commitments followed me on Twitter, like Kyle McCord and Marvin Harrison.”

Jaylin Davies isn’t the only high-level Division I prospect at Mater Dei, and the Buckeyes certainly tried to make an impact there a year ago as they pursued 5-star 2020 signee Elias Ricks..

Last week, Ohio State offered 2022 wide receiver C.J. Williams. The Buckeyes look like they’ll be a real player in his recruitment moving forward. The 6-foot-2, 195-pound receiver indicated there’s been an obvious push from Ohio State at his high school.

“I would definitely say that the presence of [Ohio State] on the West Coast is big,” Williams said. “We have seen the coaches during visitation periods pretty often, so that’s legit. Also, the fact that they only recruit the best of the best, I think that’s really important to realize.

“The value of an Ohio State offer in the eyes of our players has definitely increased over the past year.”

The Buckeyes haven’t yet been in much contact for 5-star Domani Jackson, a 2022 defensive back, but he has family ties in Ohio.

“Not yet [Ohio State contact yet],” Jackson told Lettermen Row. “I hate being so young. Most of my family is from Ohio though, over in Youngstown and Niles.”

Jackson is the country’s No. 12-ranked sophomore prospect and No. 2-ranked 2022 cornerback.

Though it’s a long-shot, it’s probably too early to completely rule out Ohio State or any other big-time program for another Mater Dei star, 2021 5-star linebacker Raesjon Davis.

Davis, who committed to LSU on New Year’s Day, was one of the players who visited Columbus in March from California. That trip was a short one, and there’s continued to be conversation since then — though it’s been somewhat limited.

Ohio State is only looking to add one more linebacker to complement Reid Carrico in the Class of 2021, and Davis is right at the top of a list that also includes Georgia 4-star prospects Barrett Carter and Smael Mondon.

With Davis committed to LSU, it is unlikely that a flip happens now or ever with Raesjon Davis. But as the Buckeyes continue to increase their visibility in Southern California and Mater Dei specifically, it’s at least worth monitoring.